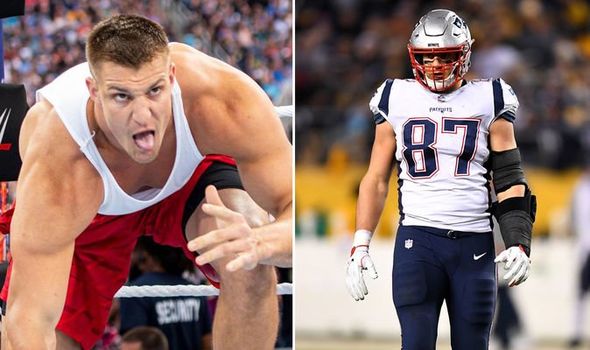 WWE have dropped a major hint that NFL legend Rob Gronkowski is set to sign a deal with Vince McMahon’s promotion. Gronkowski enjoyed a stunning nine-year career with the New England Patriots as he won three Super Bowls with some of the sport’s greatest players by his side like Tom Brady.

Are the stars aligning for Gronkowski to tackle his latest post-playing career challenge on SmackDown?

Gronk, though, retired from the sport in 2019 and has since turned into an analyst for NFL on FOX while rumours linking him with the WWE persisted.

The 30-year-old shocked the WWE Universe when he performed at WrestleMania 33 and helped his friend Mojo Rawley win the annual Andre The Giant Battle Royal.

Now WWE have teased another big crossover with an uncharacteristic statement as they addressed the ongoing speculation in their official website and even hinted that the longtime wrestling fan may appear during an episode of SmackDown later this month.

FOX own the TV rights for SmackDown and could therefore act as the link that will allow Gronkowski to join forces with the wrestling giants one more time. 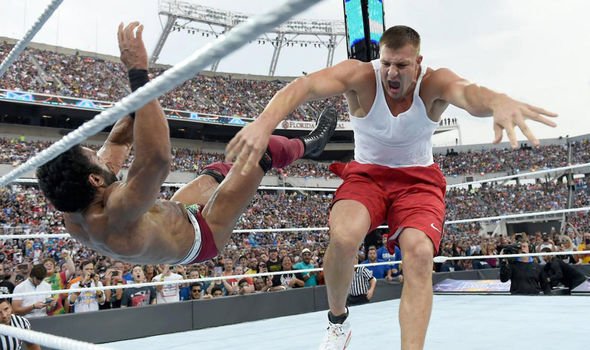 An official statement from WWE read: “What’s next for Rob Gronkowski?

“Speculation around the WWE Universe has ramped up, as the former New England Patriot and three-time Super Bowl champion appears to be closing in on his first WWE action since WrestleMania 33, potentially as soon an upcoming edition of SmackDown later his month.

“Gronkowski’s current role as an NFL on FOX analyst ties him closely to the blue brand’s home network, and the football icon spent time with Triple H, Stephanie McMahon and Mojo Rawley at this year’s Super Bowl in Miami.

“Gronk’s larger than life personality and tailor-made nickname have long caused the WWE Universe to speculate over his sports-entertainment potential.

“Are the stars aligning for Gronkowski to tackle his latest post-playing career challenge on SmackDown?”

It is not yet certain if that could lead to an angle ahead of WrestleMania 36, which takes place on April 5 at the Raymond James Stadium in Tampa, Florida.

Last time a statement like that was released WWE were teasing the arrival of AJ Styles, Shinsuke Nakamura, Karl Anderson and Luke Gallows from NJPW in 2016 – all four wrestling stars ended up signing with the company.

Various stars from different sports have crossed over to professional wrestling in the past, such as NFL legend Lawrence Taylor, basketball hero Dennis Rodman and boxing greats Mike Tyson and Tyson Fury.

WWE has seen a number of UFC legends also switching to the squared circle like Brock Lesnar, Cain Velasquez and Ronda Rousey.