Cena and Orton have a lot of history together as they feuded over the WWE Championship for many years since 2006 and faced off in Hell in a Cell, Iron Man and I Quit Matches.

The Leader of the Cenation and The Viper haven’t fought in a long time but the latter decided to poke some fun on his old foe following another one of his enigmatic tweets.

The Champ tends to share various inspirational posts on his personal Twitter account and this time urged his 11m followers to beware those who think they owe them happiness.

Cena tweeted: “Beware those who think you owe them happiness at the expense of your own well being.”

Did some marks hit you up for autographs at the airport again?

Orton read it and ironically asked if the 16-time world champion was bombarded by fans asking him for an autograph at the airport.

“Did some marks hit you up for autographs at the airport again? #probablynot #chartersonly.”

Cena now wrestles on a part-time basis in WWE due to his advanced age of 42 and his busy Hollywood schedule. 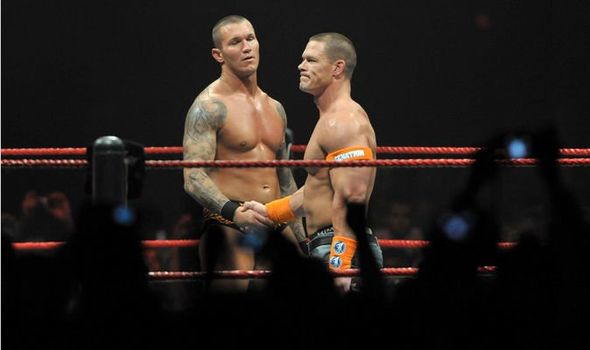 The ex-WWE Champion’s most recent appearance took place at WrestleMania 35 where he returned as his old Dr of Thuganomics persona.

Orton also performed at WrestleMania as he lost a stunning Singles Match to AJ Styles. 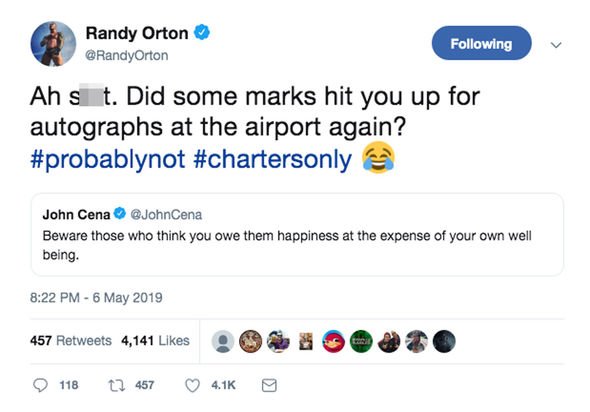 The 13-time world champion will now compete at Money in the Bank on May 19 at the XL Center in Hartford, Connecticut.

The winner of the match will be promised a world title shot at any time and place he wishes within the space of a year.