Home » Tennis » ‘We deserve to be top’: Barty defends No. 1 status after claiming Miami crown

Ash Barty returned serve to her critics after claiming the Miami Open title overnight by declaring she “deserves” to be world No. 1.

Barty claimed her tenth career title with victory over Bianca Andreescu after the Canadian retired with an injury in the final, trailing 3-6, 0-4 and with the Australian in firm control. It is the first time Barty has defended a title and was the perfect riposte to critics of her 70-week run as the world no.1.

Barty and the WTA ranking system have been the subject of intense criticism since the Australian Open, when the Australian bowed out of her home grand slam in the quarter finals. 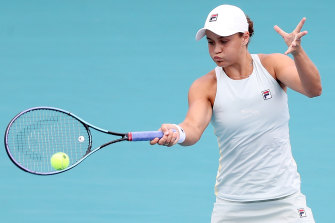 Naomi Osaka won the Australian Open title just months after winning her second US Open but remained well behind Barty in the world rankings, who only returned to the tour at Melbourne Park. Osaka had the chance to go past Barty in Miami with a tournament win but she crashed out in the semi-finals.

After defending her Miami Open crown, Barty responded to critics who have recently labelled her No. 1 ranking unjustified.

“I feel like we deserve to be top of the rankings.

“Everyone needs to understand that it’s a pandemic. It’s probably a once-in-a-lifetime thing for a lot of us to go through, so it’s a bit of a difficult situation.

“It doesn’t really get to me. I mean, it’s just what people say and I can’t change their opinion, so it doesn’t stress me out at all.”

Barty told 2GB the ranking was also justified as none of her rivals were able to catch her while she spent 2020 on the sideline.

“There were opportunities for girls to try and catch that but we were able to collect a lot of points in 2019 through a great season, so I feel like we deserve to be at the top of the rankings and I’m just trying to do the best that I can every tournament.

“That chatter doesn’t bother me, I can’t control what anyone else says or what they report. For us, it’s water off a duck’s back, it doesn’t bother us in the slightest.”

Barty spoke to reporters after Andreescu retired in the final, trailing 3-6, 0-4.

The Australian was already in control of the match when Andreescu turned her right foot while hitting a forehand and sprawled to the hard court. Barty hit one more shot to win the point, and play continued.

But during the ensuing changeover, a trainer taped Andreescu’s foot, and after another game the injury-plagued Canadian reluctantly called it quits.

“I really do feel for Bianca,” Barty said. “She has had such a rough trot with injuries in the past.” 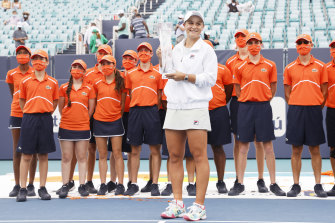 Barty made her own breakthrough by winning the 2019 Miami championship. Last year’s tournament was cancelled due to the coronavirus pandemic.Credit:Getty Images

On Sunday, 19-year-old Italian Jannik Sinner will try to become the youngest men’s champion in tournament history when he plays No.26-seeded Hubert Hurkacz of Poland. Each is seeking the biggest title of his career.

Barty made her own breakthrough by winning the 2019 Miami championship. The tournament was cancelled last year at the start of the coronavirus pandemic.

“I shouldn’t belong with that group,” Barty said with a smile. “I haven’t earned the right to be on a list with those champions. They’re genuine champions and legends, and I feel very privileged to be mentioned in that sentence.”

The match between Barty and Andreescu was their first, and a potential friendly rivalry looms. Barty dominated from the start of the final with her strong serve and all-court game.

“She doesn’t play like a lot of the players on tour,” Andreescu said. “She likes to mix it up, like me. That’s not fun to play against. I guess I’m getting a taste of my own medicine.”

Barty was playing outside of Australia for the first time since February 2020, and she arrived in Miami after a trip that took 45 hours because of two cancelled flights.

“I said to my coach when we got here, it can only get better from here,” she said.

It did. Barty was one point from defeat in her opening match against Kristina Kucova, but she gained momentum from there and will keep her No. 1 ranking next week.

With the pandemic limiting travel, the 2019 French Open champion heads into the claycourt season expecting to remain away from home for months.

“It’s a great start for us,” Barty said. “I’m looking forward to what will hopefully be a big season for us, and hopefully we can play some really good tennis.”

Because the pandemic reduced tournament revenue and severely limited attendance, the champion received $US300,110, compared with the $US1.35 million Barty won in 2019. Only 750 fans were allowed on the grounds per session.