After a whirlwind year in which she established herself as one of Australia's best athletes, world No.1 Ashleigh Barty was, as usual, keeping her feet firmly planted on the ground when pondering the possibilities in 2020.

Just hours after being awarded the Newcombe Medal for a third consecutive year, Barty admitted the lure of completing at the Tokyo Olympics gave a different complexion to a new tennis season in which she will morph into the role of the hunted on the WTA circuit. 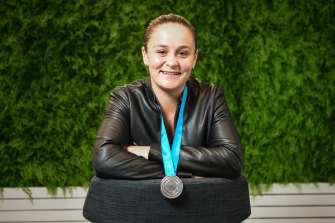 Right now the Queenslander is enjoying some down time ahead of picking up a racquet again in a week or so and setting her sights on the myriad challenges that will surface during the Australian summer of tennis.

"I actually really haven't set goals yet," said Barty, now equal with Sam Stosur as a three-time winner of the Newcombe Medal – awarded annually to the nation's most outstanding elite tennis player and ambassador for the sport.

"We're still a few weeks away from really knuckling down and kind of setting out our plans."

As always Barty acknowledged the role of the components that form her support network – from coach Craig Tyzzer to mentor Ben Crowe and manager Nikki Mathias.

"We want to make sure we have time to rest and celebrate the year that was," said Barty, the first Australian woman to finish as a year-end world No.1.

"It's been nice to have a little bit of separation from my team as well. We're in each other's pockets all year round, so it's always nice as well to be able to just relax … and for everyone to spend time with their family."

The focus will be especially sharp on Barty at January's Australian Open at Melbourne Park when she will strive to become the first local – either male or female – to win Australia's own major in more than 40 years.

There's that small matter, the chance to defend her French Open title and, squeezed in between Wimbledon and the US Open next year, a once-every-four-years opportunity for a tennis professional to secure an Olympic medal.

"I'm really excited to hopefully be a part of my very first Olympics. It could make the year extra special," Barty said.

On Monday night the humble star had special words for her parents – mother Josie and father Robert – and her first coach, Jim Joyce.

"It takes a village. We're a tennis family and I'm very humbled to be here tonight again," she said.

"I'm extremely fortunate to have such an amazing network around me. It's very special to have mum, dad and my very first coach – Jim – here.

"They gave me the unconditional love and support time and time again in all bad times.

"In good times, they're always there and there are a few words they said to me: 'I love to watch you play'.

"Honestly, it's been incredible and I'm very grateful they're here tonight to share it with me as well."