With four major titles at age 23, Naomi Osaka has already achieved an extraordinary amount in her career.

But after winning her second Australian Open to add to her two US Open titles there's something else Osaka hopes to eventually tick off her list.

“This is going to sound really odd, but hopefully I play long enough to play a girl that said that I was once her favourite player or something,” Osaka said when asked what the biggest thing she wants to achieve in her career is. “For me, I think that’s the coolest thing that could ever happen to me. I think I have those feelings of, you know, watching my favourite players.

“Unfortunately I didn’t get to play Li Na, but, yeah, I just think that that’s how the sport moves forward.” 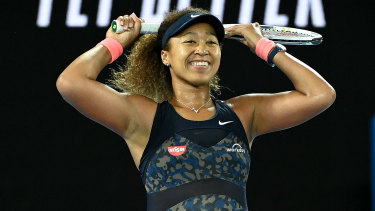 Osaka has made no secret of her admiration for Serena Williams and has spoken of her joy at playing against the American legend, who she beat in the semi-finals last week.

Someone Osaka has never played is world No.1 Ashleigh Barty.

The Australian remains comfortably perched atop the rankings despite her year off (she was able to secure a protected ranking given the upheaval of 2020’s pandemic impacted season), but the gap has closed slightly with Osaka’s win.

“Honestly, I don’t really think about the ranking at all,” Osaka said. “For me, I don’t play the most tournaments in the tour. You know, like, I just want to do well in all of the tournaments that I play.

“That’s my goal, is to be consistent this year, not to have a huge drop- off randomly in the middle section like June, July, you know, how I usually do. But, yeah, I don’t want to think too much about the rankings. It will come if I play well, and that’s what I tell myself.”

Osaka has not performed as well when playing on Wimbledon’s grass or the French Open’s clay courts.

She said he hoped to win her next grand slam on clay instead of grass, only because the French Open is scheduled to take place before Wimbledon.

“Hopefully clay because it’s the one that’s sooner. For me, I feel like I have to get comfortable on those surfaces. That’s the key thing that, you know, I didn’t play juniors, so I didn’t grow up playing on grass at all.

“So I honestly think I’d have better luck on clay, because I think last year I didn’t play bad at all. It’s just something that I have to get more used to.”