Australia's Storm Sanders is through to the Thailand Open's round of 16 after beating Norway's Ulrikke Eikeri in straight sets.

The 25-year-old qualifier cruised through her Monday clash after both her earlier matches stretched to three sets, beating Eikeri 6-3, 6-4 at the beach resort of Hua Hin, south of Bangkok. 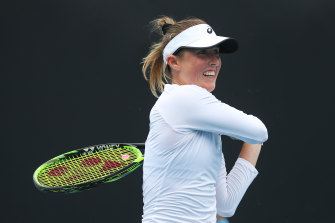 Storm Sanders is through to the last 16 in Thailand.Credit:Getty Images

Sanders is particularly happy she didn't have to face another home hope in front of the Thai crowd after her match with Peangtarn Plipuech.

"It was a good match, tough conditions, but it was good to see a lot of people out there supporting both players," she told the WTA website.

"Having the two matches under my belt was really helpful but I was really happy to play just two sets today. It was also a bit cooler, playing a bit later today and I was really clear with my game."

Sanders will next face the winner of Tuesday's clash between world No.4 Elina Svitolina and Dutch ace Bibiane Schoofs.

Despite the tougher task, she's confident she has done enough preparation.

"I've played a lot of matches out here already and had a lot of court time so I'm feeling good and looking forward to a tough match next round," Sanders said.

Meanwhile, compatriot Arina Rodionova and fellow Australian qualifier Ellen Perez both bowed out after straight-set defeats in the first round.