Rafael Nadal is out of the Australian Open after losing to Stefanos Tsitsipas, who in a career-defining performance came back from two sets to love down to triumph over the Spanish legend and win an instant classic five-set match on Wednesday night. 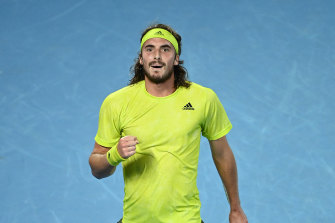 Nadal made uncharacteristic errors in the third set tie-breaker with a straight sets win in his grasp, while Tsitsipas displayed an incredibly calm temperament to weather the storm the 20-time grand slam winner had thrown his way to that point.

The Greek star broke Nadal to love at 5-5 in the fifth set and then served out the next game, despite losing two match points, to win the set and the match.

Tsitsipas will play Daniil Medvedev for a spot in his first grand slam final on Friday night.

For the first two sets Nadal was the chief aggressor.

Tsitsipas had barely a drop of sweat anywhere near his shirt or long hair three sets in.

Nadal was typically drenched, sweat pouring down his nose, his T-shirt clinging to his body and regularly going for the towel only a point after sitting down for a change-of-ends.

Forget trying to win a set or a game, Tsitsipas was having trouble just winning points.

When he did, it seemed to take every bit of effort he had. He had to stretch every sinew in his body to cover whatever millimetre he could just to get some of Nadal’s balls back.

For a player who is usually so elegant, and who has been so graceful on his way to the quarter-finals at this tournament, it was jarring.

The Spaniard wasn’t just playing tennis to win points either. It was like he was playing to try and hit his opponents, literally, off the court.

So many times on Wednesday he angled shots to move Tsitsipas beyond the doubles lines. The Greek did well to get them back over the net but the court lay open wide, indefensible, and Nadal was left an easy shot to win.

A back injury kept Nadal out of the ATP Cup and kept fans and media guessing if he would even take the court for round one of the Australian Open.

Tsitsipas would return serve just fine, get the ball back nice and deep, only for Nadal to have the quick footwork to change a backhand to a forehand and hit a winner.

Matters tightened in the third set. Neither player was losing points on their serve, pushing it to a tie-breaker, and then Tsitsipas pounced on Nadal’s errors to win it.

The Spaniard missed two straightforward volleys and skied a forehand off his frame instead of his strings, then hit a ball long on set point. These shanks changed the entire match.

Tsitsipas turned the screws further in the fourth, missing two break points at 2-2 but pouncing at 4-3 and serving it out to win 6-4.

Nadal had simply stopped playing the perfect tennis that won him the first two sets while Tsitsipas’ risk-taking paid off.