Daniil Medvedev has ridden a hot winning streak to reach the Australian Open final, the world No.4 putting on a ruthless display to give him his second chance in 18 months to take down a tennis icon in a grand slam final.

Medvedev made it 20 wins on the trot on Friday night, beating an at-times dispirited Stefanos Tsitsipas, winning 6-4, 6-2, 7-5. It was close to being a completely lopsided semi-final but the Greek fought late in the third set to push the contest beyond two hours. 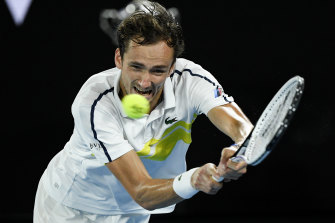 Russia’s Daniil Medvedev proved too good for Greece’s Stefanos Tsitsipas in their semi-final on Friday night.Credit:AP

Medvedev will now confront Novak Djokovic in Sunday night’s tournament-decider. At the 2019 US Open, the then 23-year-old Russian pushed Rafael Nadal in a five-setter before the Spanish great secured the 19th of his 20 major titles.

Right now Medvedev, having celebrated two more birthdays, would be delighted with just one.

The dynamic Russian will confront one of the sport’s near-impossible tasks: trying to beat the Serbian in a major final on the Melbourne Park hardcourts. If you want a stat to consider, try this – Djokovic is 8-0 in Australian Open finals.

Djokovic himself enjoyed a clinical semi-final victory over another Russian, bolter Aslan Karatsev, and the eight-time champion then said he’d nibble on some popcorn while watching Friday night’s match on TV. Judging by Medvedev’s eye-catching performance, however, Djokovic may have had a few coughs or splutters while watching.

Don’t expect Medvedev, last year’s ATP Finals champion, to be a complete pushover against a player who effectively owns a land title to Rod Laver Arena.

Save for the mini-comeback from Tsitsipas through the third set when his cause appeared lost, Medvedev’s confidence would certainly have soared having comprehensively beaten a top-10 player and only two nights after the Greek came from the dead to eliminate Nadal.

This match was pulled from Tsitsipas’ grasp quite quickly. A break of serve from Medvedev in the third game of the second set, after he had established authority in the opener, proved critical.

At the change of ends, Tsitsipas smashed a water bottle into the court, prompting what appeared to be a warning from chair umpire James Keothavong.

From that point, 22-year-old Tsitsipas was simply in a battle to hang on. His classic five-set come-from-behind quarter-final win over Nadal two nights earlier was simply a memory.

The early stages of the first set, before an expectant crowd on centre court, were soon disrupted as Medvedev quickly got on top. The graceful game of Tsitsipas was evident through his desire to charge the net. However, Medvedev’s clinical nature was also evident.

After a tight beginning, an early juncture came in the fifth game when the Russian secured the break. From that point, it was mission tough for Tsitsipas. He appeared to rally when serving in the ninth game when pushed to deuce, stepping up his game to hold.

Next up, on serve, Medvedev needed three set points to close it out 6-4.

The seventh game of set two told a story about the state of affairs. Tsitsipas, having got rid of the water bottle, looked immensely unhappy and frustrated by his predicament. But Medvedev wasn’t in a mood to show any sympathy.

Given the window to secure a double break, he didn’t need to be asked twice, racing to a 5-2 advantage.

The Russian was holding serve with utmost ease and, needing to serve it out, held to love, finishing with an ace.

Tsitsipas won only 17 points for the set. In contrast, Medvedev was clinical and converted first serves into winning points at a ridiculous 94 per cent. For good measure, Medvedev committed just four unforced errors that set.

Medvedev kept it up in the final set and, this time, a two-sets-to-love deficit proved too much for his opponent.

That Medvedev streak, which is growing in significance, dates back to last November in Paris, before a stunning charge at the ATP Finals where the Russian beat Novak Djokovic, Diego Schwartzman, Alexander Zverev, Nadal and then Dominic Thiem in the final. 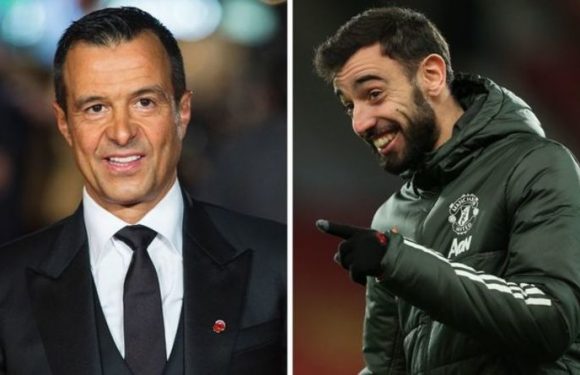