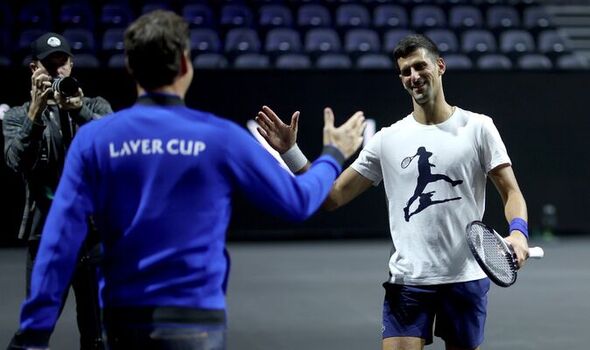 Roger Federer and Novak Djokovic shared a joke about the 2019 Wimbledon final in their pre-tournament press conference for the Laver Cup. Federer and Djokovic were joined by the whole of Team Europe in speaking to the media with the Serbian, Andy Murray and Rafael Nadal asked to give their favourite memories of playing or watching the Swiss icon.

Murray chose to speak about the 2008 Wimbledon final between Federer and Nadal, admitting he was watching from the stands and left before the end. Nadal also admitted that the 2008 final was his standout moment, but also enjoyed the 2017 Australian Open final despite Federer coming out on top that time.

All players were seemingly trying to be kind on avoiding talking too much about their victories over Federer. Djokovic started out talking about his first Grand Slam final at the 2007 US Open with Federer coming out on top in straight sets.

Federer soon chimed in saying: “They’re being nice now.” And Djokovic response drew laughs from many in the room when he said: “I’m not done yet.”

Djokovic briefly brought up the 2019 Wimbledon clash – the last Grand Slam final of Federer’s career. And Federer simply replied with a chuckle: “I’ve blocked it out.”