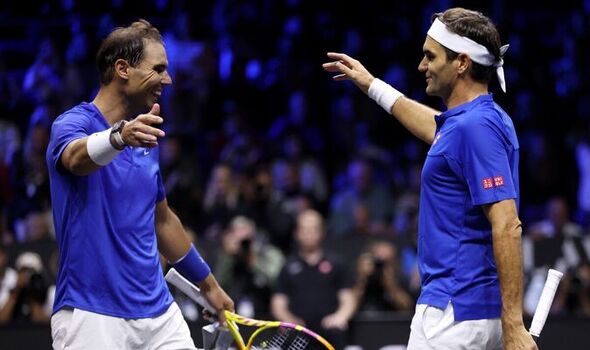 Rafael Nadal has shared the difference between his rivalries with Roger Federer and Novak Djokovic. The world No 2 reflected on the Swiss star’s retirement this year and gave an emotional tribute to his former competitor as he explained what made their encounters so special.

Nadal and Djokovic were by Federer’s side as the 41-year-old officially bowed out of professional tennis two months ago. The 20-time Grand Slam champion spent 14 months sidelined by injury before playing one final match at the Laver Cup in the doubles alongside Nadal before retiring.

It was an emotional weekend as ‘Fedal’ were pictured sobbing at the Team Europe player bench following the Swiss star’s last dance before his Big Four rivals Nadal, Djokovic and Andy Murray led tributes for him in the coming days. And the Spaniard has once again touched on his rival’s retirement as he admitted there was something special about their rivalry despite facing Djokovic more times in his career.

“There are many experiences together, important moments shared in our lives as rivals and teammates,” the 22-time Major winner told Sebastian Torok during his exhibition tour in South America. “People who somehow have feelings and understand this sport for what it is, a sport.”

Trying to explain his iconic rivalry with Federer, the 36-year-old continued: “When you have a rival like Federer, throughout the race – because when I arrived Roger was already there, in the end it was…” Nadal then turned his attention to his rivalry with Djokovic, admitting it was different because the world No 5 broke through slightly later, while the Spaniard spent his career chasing Federer.

“It’s true that with Novak and I played more matches than with Roger, but somehow I started it with him [Federer]. Due to contrasting styles and personalities, due to affinity. Someone I have admired, whom I have rivalled and also with whom I have shared many beautiful things on and off the court was leaving,” he added, addressing Federer’s farewell at the Laver Cup.

And Nadal revealed that it was difficult to acknowledge that the player who had been on the other side of the net in so many of his most important matches would no longer be on the tour, continuing: “In that sense, you know that all those moments, those feelings you have before playing a final of Grand Slam, of an important tournament, everything that was in the air before those matches… well it was different from other parties.

“You know you’re not going to live that again and somehow a part of my life is gone too. In that sense, it was also the emotion of saying goodbye to someone who has been so important to our sport.”