US OPEN LIVE: Emma Raducanu vs Belinda Bencic – British teen sensation faces the Olympic champion and looks to take another stunning victory with a spot in the semi-finals on the line

Emma Raducanu’s meteoric rise continues as she faces Olympic gold medalist Belinda Bencic with a place in the semi-finals of the US Open at stake.

The British sensation reached the quarter-final with a stunning victory over home favourite Shelby Rogers where she won 11 games in a row.

Unseeded Raducanu will face the 11 seed Bencic at Arthur Ashe Stadium with the match getting underway at 5pm BST.

Tim Henman was similarly glowing in his praise of Emma Raducanu after she responded to a tough start against Shelby Rogers to win.

Raducanu started the last tie in shaky, having been broken immediately before then losing two games in a row.

But she was able to shake off her nerves to win 12 of the next 13 games and clinch a spot in this evening’s quarter-final.

After her latest triumph, Henman said he ‘didn’t expect’ Raducanu to rally like she did, and said her performance was ‘incredible’.

To read the full story, follow the link below.

High praise, indeed! For Virginia Wade, watching Emma Raducanu in action brought with it excitement, but also just a little bit of caution.

After all, it is Raducanu who has now been tipped to go on to try and match her own success, and Wade is expected to watch on again today.

The two briefly spoke after Raducanu sealed her spot in the last eight, and Wade clearly believes in the youngster’s potential to reach the top.

Raducanu was something of an unknown quantity earlier this summer, but now everyone, including Wade, is closely analysing her game.

For more on what Wade had to say about her compatriot, click the link below.

Hello, all! Welcome along to Sportsmail’s live coverage of Emma Raducanu’s quarter-final tie at the US Open.

She takes on Olympic gold medallist Belinda Bencic with a place in the final four at stake in what has been a fairytale tournament for her.

Be honest, who saw this coming? It has been nothing short of a meteoric rise for the young British tennis sensation, who is unseeded.

Last time out, she roared to victory over home favourite Shelby Rogers, winning 11 games in a row, and will look to go one better tonight.

It will be a very tough ask but, as we’ve already seen, anything is possible when Raducanu is involved!

The match will get underway at 5pm BST, and until then we’ll bring you all the latest news and build-up. 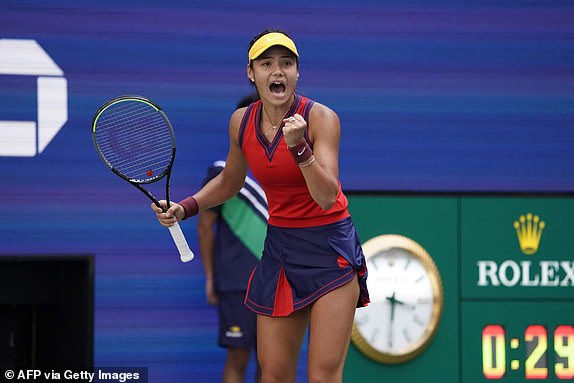