Paris: Top seed Rafael Nadal stayed on course for an elusive first title at the Paris Masters after beating Jordan Thompson 6-1, 7-6 (7-3) on Thursday to reach the quarter-finals.

Nadal has won 86 career titles, including 35 in Masters events, but lost his only final at the Bercy Indoor Arena in Paris 13 years ago. 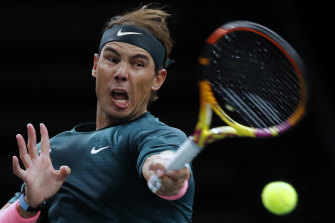 Rafael Nadal lost his only final in Paris 13 years ago.Credit:AP

“He’s always improving … this year playing the semi-finals again in New York (at the US Open) and quarterfinals in Roland Garros,” Nadal said. “He’s playing great.”

Still, Nadal holds a 6-0 lead in their meetings, having beaten him twice already this year. 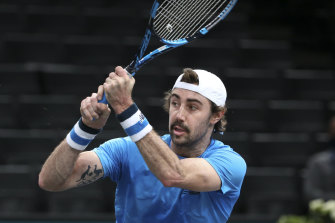 The strong-serving Russian concluded with a 13th ace and next plays No. 6 Diego Schwartzman, the French Open semifinalist who routed qualifier Alejandro Davidovich Fokina 6-1, 6-1 to take a step closer to reaching the season-ending ATP Finals for the first time.

“Diego is playing amazing at this moment,” Medvedev said. “His results are unbelievable.

Schwartzman would qualify for the November 15-22 tournament in London if he beats Medvedev.