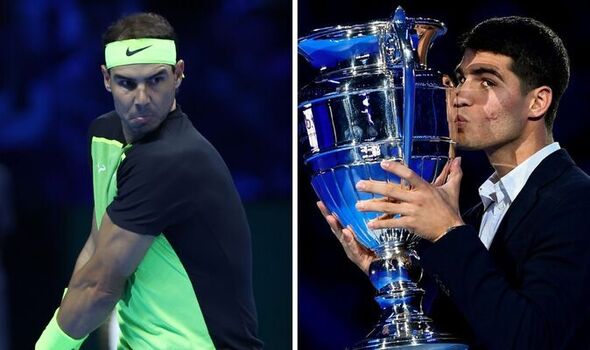 Rafael Nadal has praised Carlos Alcaraz’s rise this season as he hinted that the world No 1 could go on to surpass his greatness. The 19-year-old won five titles this year, including the US Open which made him the first teenager to win a Major since Nadal himself 17 years ago, and the elder Spaniard believes that Alcaraz could go on to become one of the best in history after starting young with his big title victories.

Alcaraz officially became the youngest year-end No 1 in history when he clinched the top ranking for the end of the season during last week’s ATP Finals. Despite being forced to pull out of the tournament injured, the Spaniard arrived in Turin to collect his trophy and cap off one of the greatest breakout seasons in recent tennis history having won the US Open, two Masters, two ATP 500s and becoming the first-ever teenage world No 1.

The 19-year-old has often drawn comparisons to countryman Nadal as he has mirrored some of the world No 2’s achievements from when he was the same ago but Alcaraz recently shut down the comparisons, while Nadal has now hinted that the US Open champion could go on to be even better as he discussed the state of Spanish tennis.

“There has always been a generational change. It is true that we had been missing in recent years, we were only Nadal, Carreno, Bautista,” the 22-time Grand Slam winner said, referring to himself and top 25 players Pablo Carreno Busta and Roberto Bautista Agut. “But now someone very special has arrived.”

Nadal explained that Alcaraz had something different and claimed his potential was even bigger after he managed to start winning Majors as a teenager. He continued: “Carlos is a very different player, who aspires to be one of the best in history.

“He is young, he has started well, he has the potential to achieve great things and he is already achieving them. Happy to have someone very good in our country and that we enjoy him for many years.” The 92-time tour title winner also discussed Spanish tennis as a whole and admitted that the country didn’t get the same luxury as other nations but still managed to boast a host of top 100 players.

“We are a country with a great tennis tradition. We are not a big country, nor do we have the Federation that has the most resources, it is something that we have pending,” Nadal said. “We have great references in world tennis, but we are not a Federation like the Canadian or Italian who receive large income a year for organising Masters 1000.

“But we are a country that has opted to organise many tournaments of lower categories and that has had a very big impact on young people,” he added, explaining how the country had been able to shape a talent like Alcaraz.