Consult the qualifying results for any grand slam event and you’ll find examples of players who’ve overcome adversity, beaten outrageous odds or are staging a comeback for the ages.

This year’s Australian Open was no different – albeit men’s and women’s qualifying took place in the Middle East weeks ago due to COVID-19 logistics – but there’s one woman who’s been rivalling some of the world’s leading players for media attention, and she hasn’t even played her first match in a grand slam main draw yet.

Briton Francesca Jones, aged 20 and ranked in the mid 200s, has a rare genetic condition – ectrodactyly ectodermal dysplasia (EED). In short, she was born with a thumb and three fingers on each hand, three toes on one foot and four on the other. 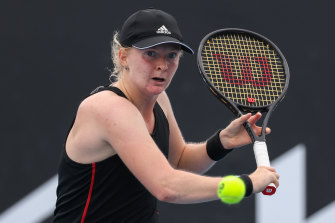 “I didn’t know I knew that many people, to be honest. No, I think it’s been an interesting couple of
weeks. Suddenly in that moment I just wanted to call my parents,” Jones told reporters in Melbourne.

“My parents have invested everything, their energy, financially they’ve put a lot into me, and I have goosebumps just saying that.

“I moved to Barcelona when I was 10. My parents didn’t move with me. There have been a lot of sacrifices, but my feet are very much on the ground. My ranking so far won’t have jumped too much and I’m still very focused on the process and the stepping stones that I still have to jump over.”

On Tuesday, Jones her main draw grand slam journey will begin when she takes on American world No.57 Shelby Rogers.

Jones’ physical reality has necessitated a lifetime of adaptation.

“Some of the obvious barriers when I was a child were balance and just the way that I would put weight through my feet, and obviously grip, needed to have quite a few modifications done to my racquets when I was a child and still do today,” said Jones.

“In terms of the day-to-day, as I’ve said previously, every athlete faces their challenges. I have strengths and I have weaknesses, and I work on my weaknesses like the next female tennis player that walks in here will.

“It’s just progress, a work in progress that I’m constantly trying to evolve.”

Quizzed about whether she needs medication – in that the rigours of professional tennis might induce greater pain in her circumstances – Jones maintained her pragmatic stance.

“Medication is mental strength,” she said.

“It’s just making sure that I keep myself in the right headspace. I have a great support team around me. I have doctors and physios that look after me at the LTA [Lawn Tennis Association] and the National Tennis Centre just outside London.

“I’ve had unbelievable physios in Barcelona where I’ve been based for the last 10 years that give me everything.

“Yes, I do receive a lot of treatment. I have to look after my hips because of the way that I put weight through my feet and my shoes. It’s important that I look after the rest of my body that may try and compensate for some of those deficiencies.”