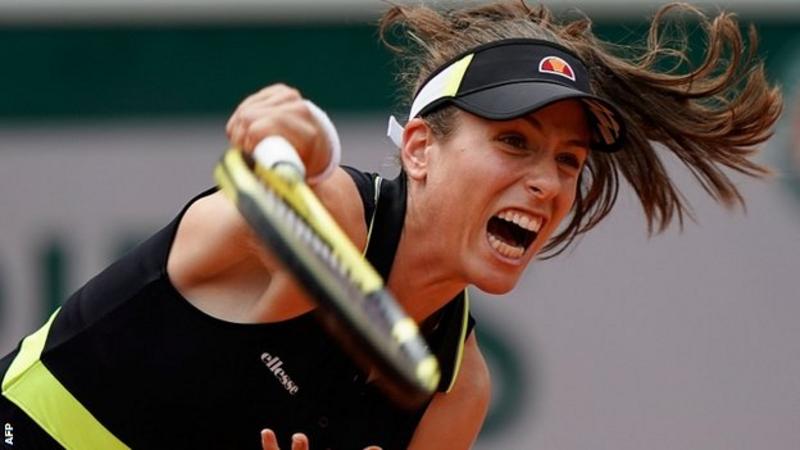 Johanna Konta’s extraordinary French Open continued as she beat Sloane Stephens to become the first British woman since 1983 to reach the semi-finals at Roland Garros.

The British number one, seeded 26th, played near-perfect tennis in a 6-1 6-4 win over the American seventh seed.

She will play Croatian 31st seed Petra Martic or Czech teenager Marketa Vondrousova in the last four in Paris.

Konta will be playing in her third Grand Slam semi-final – on a third different surface – after runs to the same stage at the 2016 Australian Open and Wimbledon in 2017.

And she will look to go one better than Jo Durie – the last Briton to reach the women’s semi-finals 36 years ago – by reaching Saturday’s final.

“To play on the new Chatrier court against a top player and at the level I did, I’m really proud of myself,” said Konta.

“It’s hard to say if it was one of the best matches of my career, but dealing with conditions out here and against an opponent like Sloane who can run away with it, I was pleased to get her on the back foot and control the points a little bit.”

Konta growing in confidence on clay

Konta’s resurgence on the clay has been one which few people would have predicted at the start of the clay season, when she was ranked 47th in the world.

The former world number four has shown her pedigree on grass and hard surfaces, but had never won a main-draw match on the Paris clay until this year.

Signs of her improved fortunes were evident as she reached two WTA finals at the Morocco Open and Italian Open – and that form has continued at Roland Garros.

Now she has won 15 matches on the surface in 2019, meaning only Martic stands alongside her in terms of clay-court victories on the tour this year.

Linking up with new coach Dimitri Zavialoff at the end of last year has paid dividends, Konta once again showing increased trust in her ability to cause opponents problems with her hard-hitting game.

Yet, although Konta’s confidence has been evident throughout the tournament, the manner of this 71-minute victory against someone of Stephens’ pedigree left those on half-full Chatrier murmuring with surprise.

Stephens, who won the 2017 US Open as well as reaching the final here last year, was rated as the favourite coming into Tuesday’s quarter-final, with former Grand Slam champions Martina Navratilova and Lindsay Davenport backing the American.

Konta came under immediate pressure in the opening game of the match, needing to see off a break point and come through a lengthy deuce to hold serve after eight minutes.

That proved pivotal as Konta swatted her lacklustre opponent aside from then on.

The Briton’s aggressive approach did the damage as she ended up hitting 25 winners and six aces on her way to taking 87% of first-serve points.

Stephens, usually nimble around the court, had no answers to Konta’s power and precision.

Konta broke Stephens’ serve for a 3-1 lead, claiming the next three games to win the opening set in just 33 minutes.

She continued to dominate in the second set, not dropping a point on serve until she produced a double fault in the final game.

By that time it mattered little, the Briton resetting to take victory when Stephens pushed a return inches wide of the line.

Perhaps a sign of Konta’s renewed belief was evident in her relatively understated celebration: a simple turn to her coach Zavialoff and boyfriend Jackson Wade wearing a wide grin, before raising both arms aloft as she took the acclaim of the crowd.

Konta’s path to the latter stages – and a potential chance to become the first Briton to win Roland Garros since Sue Barker in 1976 – has opened up following an unpredictable women’s tournament.

After beating Stephens, Konta will face an opponent in either Martic and Vondrousova who, like the Briton, reached the Roland Garros quarter-finals for the first time.

Stephens was one of only three top-10 seeded players to make the women’s quarter-finals, along with Romania’s defending champion Simona Halep and Australian eighth seed Ashleigh Barty.

Former world number one Halep and Barty will meet in the other semi-final – if they beat 17-year-old American Amanda Anisimova and 14th seed Madison Keys respectively in their quarter-finals on Wednesday.

‘The best I’ve seen Konta play’ – what they said

BBC tennis correspondent Russell Fuller: “The entire performance was breathtaking. Everything about Konta’s performance was majestic. Sloane Stephens could do nothing on Konta’s serve. She had the stuffing knocked out of her. That’s the best I have ever seen Konta play.”

Former world number five Daniela Hantuchova for BBC Radio 5 Live: “Konta couldn’t ask for a better match and if she keeps playing like this I don’t see anyone that can stop her. Simona Halep was my pick to win the trophy before the tournament but the way Johanna played it will be really interesting.”

Radio 5 Live tennis commentator Naomi Cavaday: “I felt for sure every set would be tight and ultra-competitive but Johanna was too good for Stephens. I think Konta can take out Halep if she plays like that. That was phenomenal.”