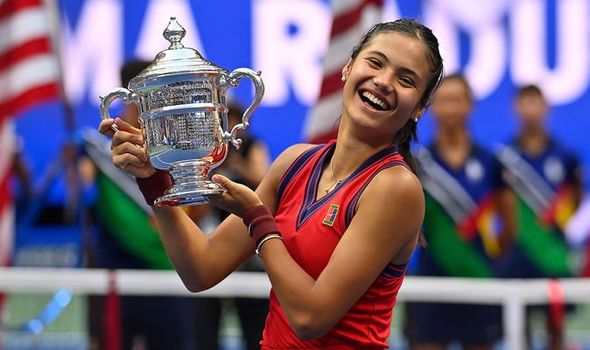 The Australian legend said Raducanu, 18, and her Canadian opponent Leylah Fernandez, 19, are set to fill the void when Serena Williams retires.

He added only Japanese star Naomi Osaka can rival them as the two teenagers dominate tennis for years to come.

Cash, 56, said: “She [Raducanu] is a great athlete on all surfaces. We may be losing Serena, but now Naomi Osaka and Emma will lead the pack. And unless they get injured, they will be the biggest names in both men’s and women’s tennis for years.”

He added: “It’s absolutely mind blowing to think these two young girls, 18 and 19, made the final. This weekend has been history in the making.

“Even I’m confused about what’s going on – to see these girls, and the others not able to win matches against them.”

Cash, who was Wimbledon champion in 1987, said Emma would have learned a lot from her own run at the All England Tennis Club this summer.

Just after sitting her A-levels in maths and economics at Newstead Wood School in Orpington, Kent, Raducanu was given a wildcard entry to Wimbledon when ranked 338 in the world.

She reached the last 16 before pulling out of her fourth-round match with breathing difficulties. Cash said: “Emma has been playing unbelievably well and very carefree tennis.

“She is in a very lovely part of her development – she is young, energetic and carefree and without such a feeling of pressure.

“She probably learned from when she got too pumped up at Wimbledon but the way she played up to the US final, I cannot see any problems.”

He added: “She is very calm and very relaxed, while the other women who have been playing her are a ball of nerves.

“But she is not playing like Serena Williams, slamming 20 winners. She is just playing extremely good tennis but she’s playing within herself.”

The 66-year-old American said: “She has exceptional ability across the board – she is a great athlete, well balanced, she’s spectacularly well balanced emotionally and socially not driven by ego.

“We’re all just astounded she’s doing as well as she’s done and has surprised everyone under the sun.”

Millions of people watched the US Open final live on Channel 4 last night after a deal was struck with Amazon’s Prime Video streaming service, which had exclusive UK broadcast rights.

In doing so, Raducanu has already helped inspire and fund the next generation of British tennis stars, as Amazon has pledged to reinvest the money from the deal, reported to be a seven-figure sum, into British women’s tennis.

Alex Green, managing director of Prime Video Sport Europe, said: “Emma’s journey from qualification through to the US Open final at the age of 18 is truly a magical story for British sport.

“We thought it was important to extend our coverage to as many people as possible to support her in this historic moment.”

Raducanu, ranked 150 in the world when she started her fairytale run in New York by going through three rounds of qualification, was bidding to become the first British woman to win a major since Virginia Wade in 1977.

By reaching the final she earned at least £1million, with the winner receiving £2.1million.

Prime Minister Boris Johnson told Raducanu: “The whole country will be cheering you on.”

From panic attack to perfect poise

Leading mind coach Don Macpherson says he has never seen anyone change their mental approach as quickly as Emma Raducanu.

The sports psychologist, who has worked with a host of Grand Slam winners including Pat Cash, Goran Ivanisevic and CoCo Vandeweghe, has been amazed by the transformation of the British teenager in NewYork.

He said: “In 30 years of working with elite athletes I have never seen anyone transform so quickly mentally speaking, as Emma.

“How she has morphed from what was effectively a full-blown panic attack at Wimbledon a few weeks ago to a seemingly fearless ‘smiling assassin’ at the US Open is truly awesome.”

Don added: “She appears to be so calm, relaxed and confident, actually enjoying the pressure, as though it really is a privilege.”