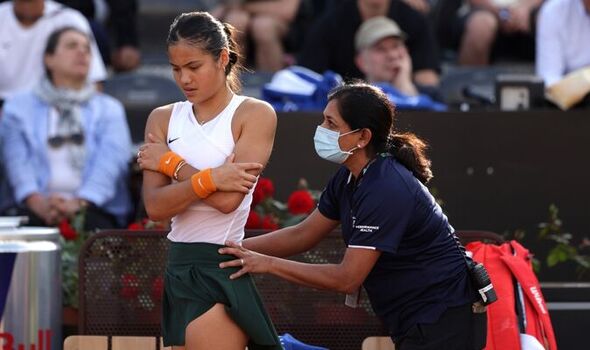 Emma Raducanu will reportedly head back to London this week in a bid to determine whether a scan is needed on her lower back. Raducanu has been building up the clay court season for her debut at the French Open later this month.

After impressive performances in Stuttgart and Madrid, Raducanu looked to build up more momentum in Rome this week. But she was given a tough opening-round draw against Bianca Andreescu and the Canadian got off to a strong start by winning the first set.

Raducanu appeared to be struggling with an issue throughout the match though and called a medical time out in the first set. The back problem failed to go away at the start of the second with Raducanu heard telling a physio: “I can’t move”.

The 19-year-old eventually withdrew from the match with concerns over how the injury will affect her plans for the French Open. Speaking after her exit from Rome, Raducanu made it clear that she wants to focus on returning to full fitness before playing again.

JUST IN: Raducanu gets advice from Italian Open conqueror after latest injury

“I think the last few weeks have been really positive,” Raducanu said. “I’ve learned a lot about myself and my game has definitely improved on this surface.

“But for sure I need to make sure my back is fully right, however long that takes. I need to just keep on it. I don’t want to play my next match with a feeling of limitation because I think that I learned my lesson from this week, when to push, and when not to push. Probably today wasn’t right.”

And the Telegraph claim Raducanu will head back to London this week to determine the true extent of her injury. It is claimed that Raducanu doesn’t feel a scan is necessary, but she will ‘take the advice of physiotherapists’ back home.

Raducanu has already played in eight tournaments this year in a bid to get up to speed on the WTA Tour. The teenager still hasn’t been on the WTA Tour for a full year yet having broken onto the scene last summer at Wimbledon.

But back issues have been a regular problem for Raducanu in her short career so far. Whether she plays at the French Open later this month remains to be seen, but the young Brit will be hoping her back injury doesn’t keep her out of action for long.