Home » Tennis » Barty Over: Ash out of Open

World No.1 Ashleigh Barty has sensationally crashed out of the Australian Open after giving up a dominating lead in her quarter-final.

Up a set and a break, Barty’s Czech opponent Karolina Muchova clawed her way back into the contest to produce one of the more remarkable comebacks in recent grand slam memory. 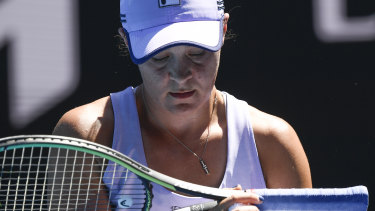 Ash Barty is out of the Australian OpenCredit:AP

All in all, she won 11 of the next 14 games to crush Barty’s hopes of a dream final at her home slam.

In an interesting admission after the match, Muchova said she didn’t take the medical time-out for an abdominal injury that hampered her earlier in the tournament but instead said her “head was spinning”.

“I started to feel a bit lost by the end of the first set,” she said on court after the match.

“My head was spinning and I took a break, it helped me, I tried to get back and play faster rallies and it worked well.”