World No.1 Ashleigh Barty has fought back to beat eighth-seeded Kiki Bertens of the Netherlands in three sets to reach the final of the China Open in Beijing.

The Australian, who accounted for Petra Kvitova in three sets in the quarter-finals, won Saturday's first set 6-3, only to drop the second by the same margin, before holding off Bertens 7-6 (9-7) in the deciding third set. 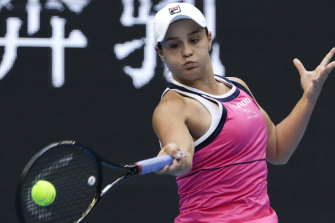 Ashleigh Barty of Australia hits a return shot against Kiki Bertens of the Netherlands.Credit:AP

Barty overcame a service break early in the third, clawed her way back from 0-3 in the tiebreak and saved one match point.