Home » Tennis » After more than two decades on tour, Federer is again raring to go

The most successful men's tennis player in history – 20-time major winner Roger Federer – says he's not lacking in motivation as he embarks on a 21st appearance in the Australian Open main draw.

With world No.1 and great rival Rafael Nadal hot on his heels after winning the French Open and US Open last year, Federer said he was "very excited" when packing his bags before heading to Melbourne in pursuit of a record-equalling seventh Australian Open title.

He'll celebrate his 39th birthday in 2020 but the world No.3 said no aspects of professional tennis were bothering him – travel, practice, media commitments – and, most importantly, the Swiss champion said he was in excellent physical condition at the start of a new tennis season.

Federer hasn't played since early November when he lost to Stefanos Tsitsipas in the semis of the ATP Finals, but he did play a series of exhibition matches in Latin America and China. 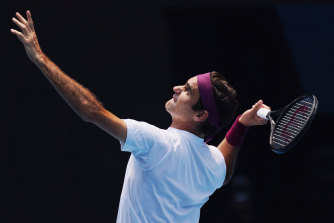 In November he also withdrew from the just-completed ATP Cup men's team's event – held in three Australian cities before next week's Open – meaning Switzerland had no longer qualified. His great rivals Nadal and Novak Djokovic took their nations to the final, with Serbia winning the inaugural tournament.

Without a grand slam tournament win since the Australian Open two years ago and after going extraordinarily close to securing a ninth Wimbledon title last year before losing to Djokovic, Federer said he had no issues with motivation.

"The travel doesn't bother too much, to be honest," Federer said.

"Last week I was asking myself, 'am I happy to go to Australia', or actually would I rather just stay here and stop packing immediately – because I can.

"I could easily just stay home. And I was like, 'no, no, no, I'm really happy to go to Melbourne and kick off the season there'."

He also gave an insight into the secrets behind his extraordinary longevity, confirming that long ago the seeds were planted for him to be on the professional circuit until a ripe age.

"So it wasn't just decided five years ago that hopefully I'd still be playing at 38.

"It was probably decided a long long time ago after I won my first Australian Open here in 2004 and I got to world No.1 for the very first time.

"I hoped to have longevity. I worked hard for it really."

The Nadal-Djokovic-Federer triumvirate continues to dominate the tennis skyline – they have 55 majors between them – but the Swiss says he's not overly fazed if either Nadal (19 majors) or Djokovic (16 majors) goes past him.

"It was a big deal for me to equal Pete's [Pete Sampras] record and then maybe of course break it," said Federer, who surpassed Sampras' 14 majors in 2009.

"But ever since it's been about trying to add what I can to the tally. But I enjoy playing tennis. I love it. I hope I can still play for a little longer.

"And if I can add more grand slams that's great, but it's not [about] trying to fend off the others – if they pass me that's OK."

When asked about Australia's leading players, Federer said women's world No.1 Ashleigh Barty might need to adapt as she moves from being the hunter to the hunted.

"But you can really explore all your potential you have. That's what happened when I won my first major and I rose through to world No.1. After that I thought, 'I'm the guy to beat'. I'd prefer to be in this position than being a contender.

"I hope Ash is also going to see it that way."

Federer also had positive words for Nick Kyrgios, saying the controversial Australian needs to continue to focus on his mental strength.

"He doesn't need to improve a whole lot in his game," Federer said.

"He's got the forehand, the backhand, the serve and volleys and all that stuff.

"With Nick, we know it's elsewhere. It's his mind.

"He knows he can beat everybody. He has proven his point and he gets respect for that."