Home » Soccer » World Cup team of the first round: Bellingham and Al-Tambakti star

Jude Bellingham, Richarlison and Saudi Arabia star Hassan Al-Tambakti storm into our World Cup team of the opening round… but with just ONE France player included, does Mbappe make it?

Brazil’s win over Serbia capped off the first round of matches at the Qatar World Cup and there have been a whole host of fabulous individual displays.

Richarlison stole the show for Brazil with a brace, Olivier Giroud edged closer to history for France and both Bukayo Saka and Jude Bellingham looked superb in England’s 6-2 rout of Iran. 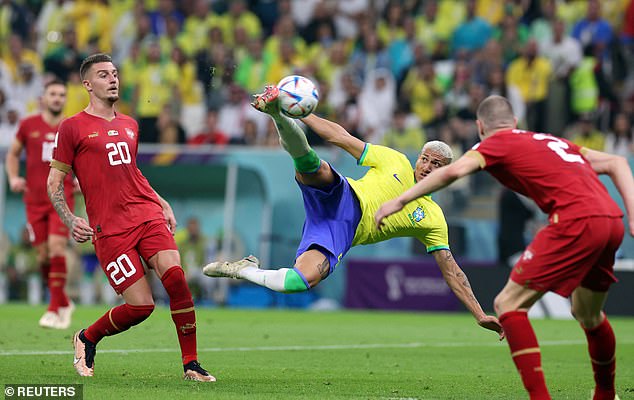 Many would have expected Lionel Messi to star, only to see Argentina get turned over by Saudi Arabia. Then there was Germany, who let their lead slip to lose 2-1 to Japan.

Sportsmail picks out the best XI of the opening round of World Cup matches.

A Man-of-the-Match display and a penalty save to keep Mexico’s hopes of the knockout stages alive, Ochoa just edges out Belgium’s Thibaut Courtois for the spot between the sticks.

Ochoa is a hero, a legend, in Mexico for his years of service in the national team and he only elevated his status as one of their all-time greats with his huge contribution in their opening game.

At 37 he holds a wealth of experience and his penalty save was no fluke, given the fact he was studying Lewandowski’s spot-kicks for the past two weeks. 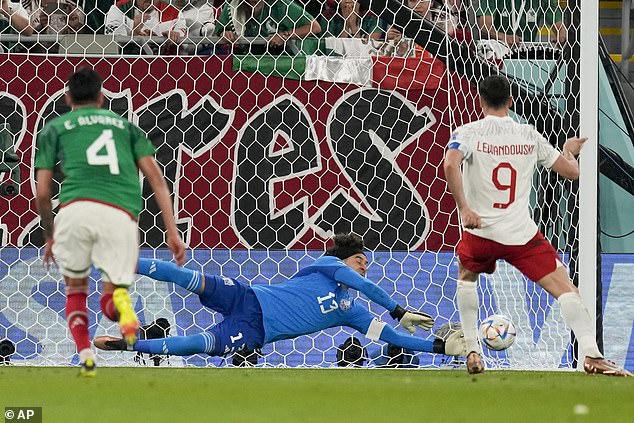 ‘We worked on this the last two weeks, even the last month, with the goalkeeping coach,’ Ochoa said after the 0-0 draw.

‘It’s always difficult when you watch videos of Lewandowski’s penalties. You see more than 50 penalties and you never know which place to choose.

‘I’m happy to have saved his penalty and kept a clean sheet.’

Mexico take on an Argentina side licking their wounds having been humbled by Saudi Arabia in the first game and so Ochoa can expect an onslaught on his goal once more.

News that Hakimi may be out of Morocco’s second game against Belgium on Sunday should be sounding the alarm given how much joy he got in their 0-0 opener against Croatia.

A clean sheet, first and foremost, but the PSG full-back’s all-round game was brilliant to watch at times.

A lot is made about the importance of Hakim Ziyech but the Chelsea man in tandem down the right with Hakimi can cause major issues.

Went close with a rifled effort against Croatia and will be a huge loss if he’s injured.

His celebration at the end, when he punched the air and let out a roar, said it all after stunning tournament favourites Argentina.

And make no mistake that Hassan Al-Tambakti, the 23-year-old centre back, was as good as anyone on the pitch in Saudi Arabia’s 2-1 win. 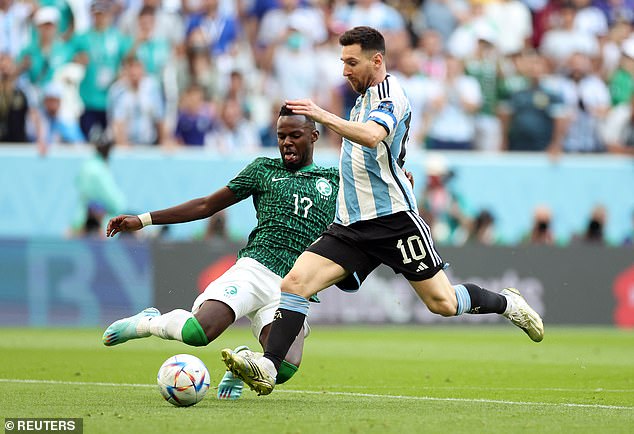 The centre back, who plays for Saudi Pro League side Al-Shabab, caught the eye with some heroic blocks and he marshalled both Messi and Lautaro Martinez exquisitely.

Argentina threw everything at Saudi Arabia and yet they stood firm, with Al-Tambakti celebrating each crucial defensive intervention like a goal.

Keep this up and he’ll be hot property in January.

There was little to celebrate from Uruguay 0-0 South Korea – but a word on the defence.

Diego Godin struck the post and given South Korea failed to register a single shot on target – in fairness, neither did Uruguay – we’ll give some credit to Godin.

The 36-year-old just oozes class and what he lacks in pace he makes up for in football IQ. Almost like he knows what will happen before it actually does.

The thing about Luke Shaw and England is that the Manchester United left back is incredibly valuable at major tournaments.

His assist for Jude Bellingham’s goal, the opener in the 6-2 win over Iran, made it five goal involvements from his last five England games at major tournaments.

He is dependable for Southgate and while there is a hairy moment or two defensively – and tougher tests to come – Shaw has a knack of delivering on the biggest of stages. 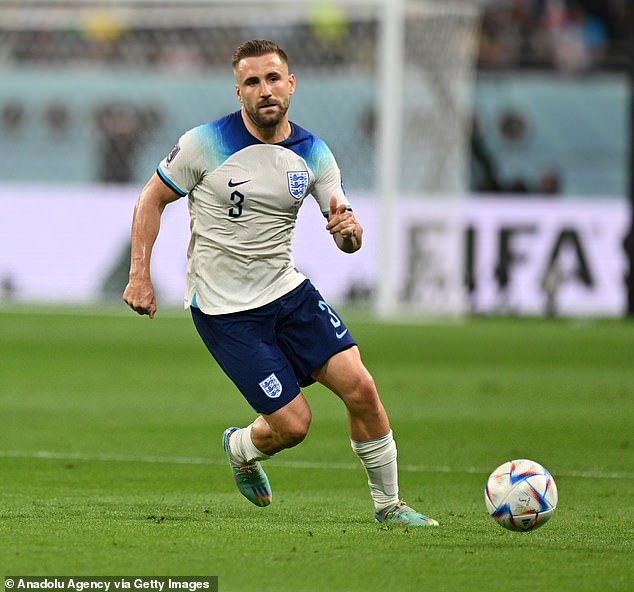 Just how much is Jude Bellingham worth? £150million? £200m? Every performance at this World Cup holds the potential to add even to his price tag and his World Cup debut against Iran was a mightily impressive start.

Bellingham made the run into the box that was picked out by Shaw as he nodded England in front with his first goal for the Three Lions.

He just looks so at ease on the ball, and in control too, despite being just 19 years old.

Roy Keane, a man notoriously difficult to please, was left raving about Bellingham after the Iran game, insisting the Borussia Dortmund star has ‘everything’ in his game. 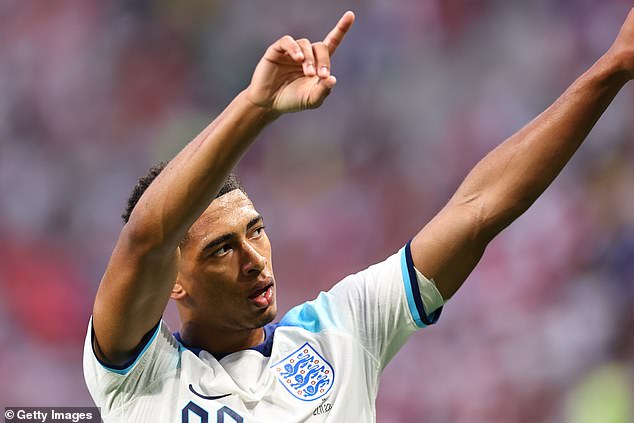 ‘He plays with a maturity, he’s got everything you want in a midfielder in the middle of the park in terms of his physique, his maturity, his decision making, his skill,’ Keane said.

‘This finish is fantastic. You remember all the brilliant England midfielders over the years people like Bryan Robson, Scholesy, Lampard and Gerrard.’

Bellingham might be just one game into his World Cup career but he’s got the potential to be the stand-out player come its conclusion.

How could we not pick the youngest World Cup scorer since Pele?

With his goal against Costa Rica, Gavi became the youngest goalscorer at a World Cup since Pele in 1958 – talk about esteemed company.

But more than just his goal, Gavi, 18, looks so accomplished and so classy already.

Alongside Pedri it is easy to draw comparisons to the great Xavi and Andres Iniesta partnership but both really do look the real day.

Forget the age on the birth certificate, Gavi is a star now – and everyone in Qatar has been put on notice. 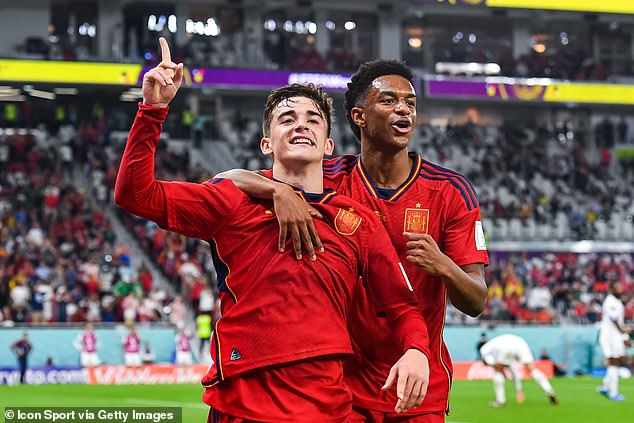 A match that was always going to be dominated by the performance of Cristiano Ronaldo – given his Manchester United contract was ripped up on Tuesday – it was his former club team-mate that really stole the show.

Fernandes wants to be – and often is – the heartbeat of this Portugal team and he drove forward successfully, and with real purpose, when Ghana looked to switch the momentum in their favour. 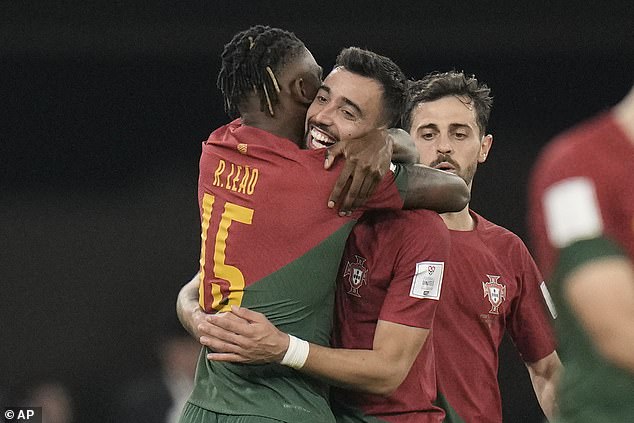 Playing in the No 10 role he masterminded their 3-2 win over Ghana with his vision and passing a cut above those around him.

He completed 48 of 51 passes he attempted, giving him a 94 per cent success rate.

So, all eyes may be on Ronaldo but it is Fernandes that can be the man to guide them to glory.

Always playing with a smile and among the most humble in the game, it is hard not to smile when Bukayo Saka is in full flow.

His brace in England’s 6-2 win over Iran was brilliant – his first on the half-volley in particular – and given there was so much debate in the build-up as to whether he merited a start ahead of Phil Foden, he soon made all that discourse look rather foolish.

Saka has become a national treasure and his brace against Iran has shot him into the global consciousness, too. 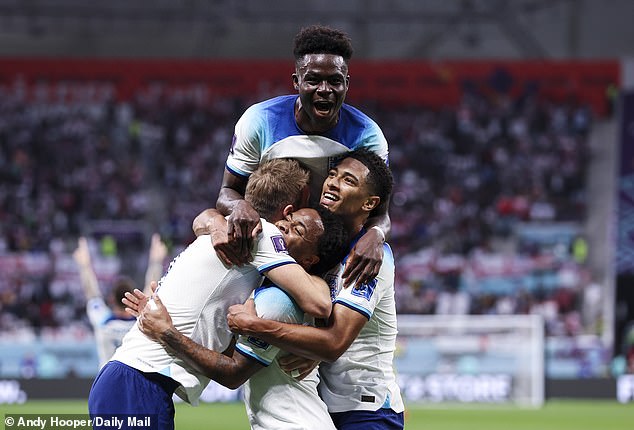 He is humble, well-mannered and ultimately incredibly resilient having thrived in his first tournament game since missing the last penalty in the Euro 2020 final defeat to Italy.

He bagged two but what a goal his second was. The touch, the spin and the acrobatic finish. Simply sublime.

After a slow start against Serbia there was plenty of noise on social media as to why Richarlison found himself preferred to Arsenal’s Gabriel Jesus. 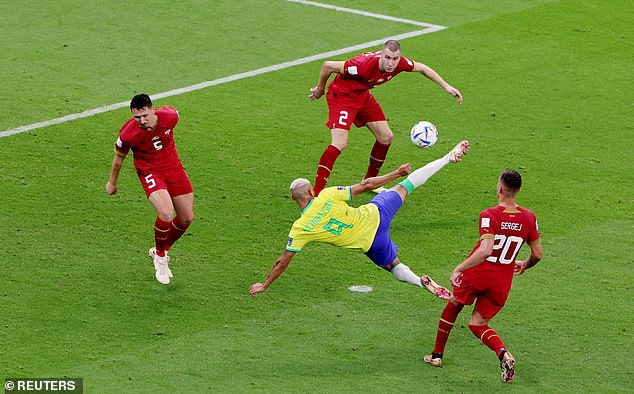 His first was poacher’s instinct and his second was straight out of the top drawer.

Nobody was asking about Jesus come the final whistle and there can be no question who Brazil’s starting No 9 is now – although he is deployed on the wing in our XI, because we just couldn’t keep out a certain Frenchman…

No, it’s not Kylian Mbappe – but the ageless Olivier Giroud.

It’s always a difficult one to judge if Giroud is still being underappreciated.

After a brace in the 4-1 comeback win over Australia, Giroud is now one goal away from becoming France’s all-time leading goalscorer. A phenomenal achievement given those – like Thierry Henry who is tied with him now on 51 goals – who have come before.

This spot could have gone to his team-mate Kylian Mbappe given his majestic display in the first game but given he stands on the cusp of history, Giroud just gets the nod. 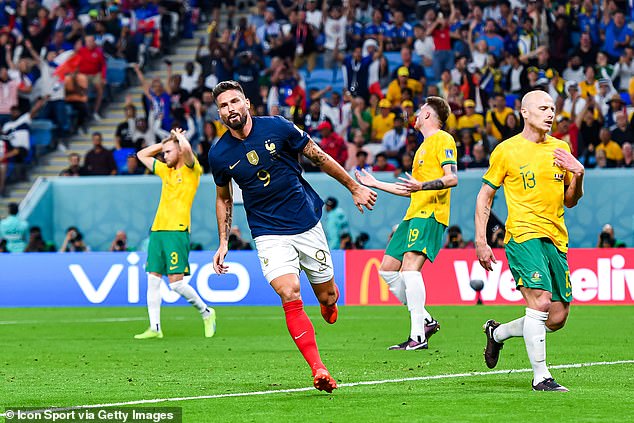 Boss Didier Deschamps is adamant Giroud isn’t fussed on the records those in the media room put to him but it would undoubtedly be special if he can break it against Denmark on Saturday.

‘You tend to talk about records a lot, he tends to focus on what he does on the pitch,’ Deschamps said this week.

‘He was very effective tonight, which is great for him, he’s useful with the way he links up with the other attackers in our team.’

If France are to go on to retain their world crown, Giroud is going to be front and centre of it. 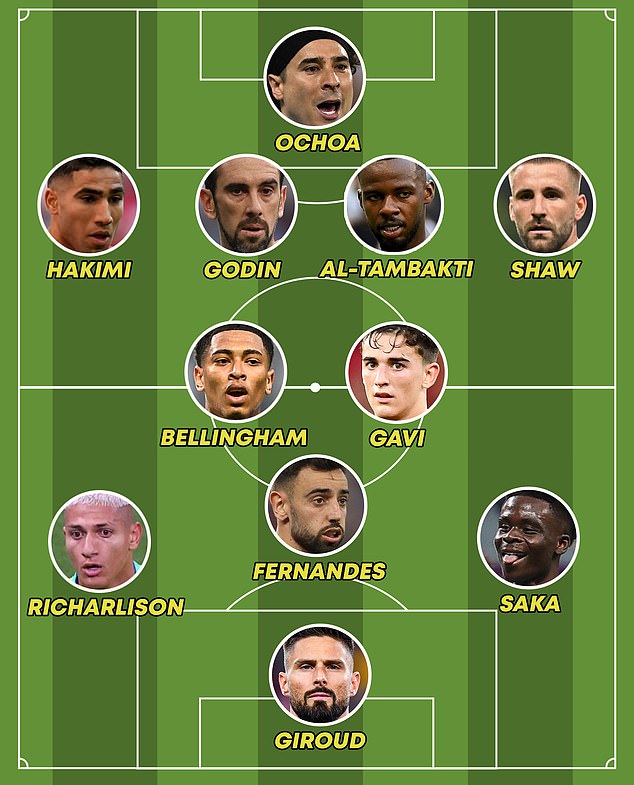