World Cup 2022 LIVE: All the latest from Qatar as Brazil face nervous wait over Neymar, Wales need a win (and goals!) against Iran and England return to action against the United States in Group B

Follow Sportsmail’s live blog for all the latest World Cup news and updates with Wales, England and the USA back in action TODAY.

Hundreds of Wales fans gathered early in Doha to take part in a singalong ahead of their team’s match against Iran, amid reports that several travelling from Dubai faced visa problems at the airport and risk missing the game.

A sea of red shirts and bucket hats could be seen on the city’s waterfront on Friday, along with the Urdd Youth Choir and Yma o Hyd singer Dafydd Iwan, with the crowd belting out fan favourites including I Love You Baby, and the Welsh national anthem.

The home nation will face Iran at 10am UK time, with England set to play the USA at 7pm.

The Wales Football Supporters’ Association said on Twitter: ‘Loads (of visas) finally got approved late but this whole process with day permit for Iran game has been difficult for our fans.

‘We have informed Fifa and FAW.’

Dozens of fans replied to the post saying they or other supporters had been affected.

Fans with a valid match ticket are able to apply for a Matchday Visit Hayya Card, which is a visa permit that allows entry into Qatar for up to 24 hours.

However, many have reported that they are not being issued in time to board the shuttle flights into Doha.

There are hopes that ticketing issues which flared during England’s first game against Iran will have been resolved, while Fifa sought to reassure supporters on Thursday that those wearing rainbow-coloured hats and clothing would be allowed into the stadiums. 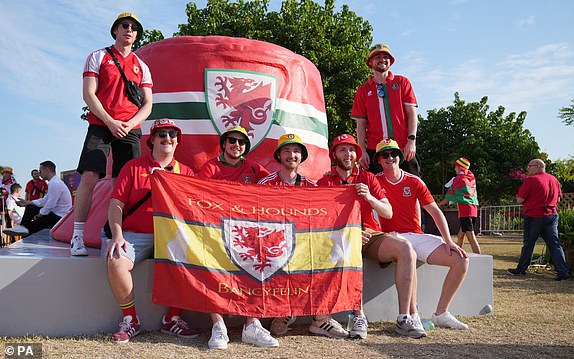 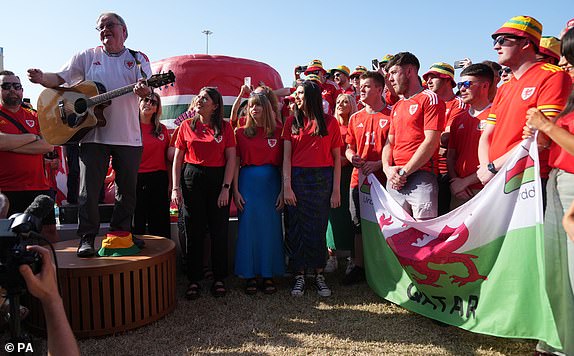 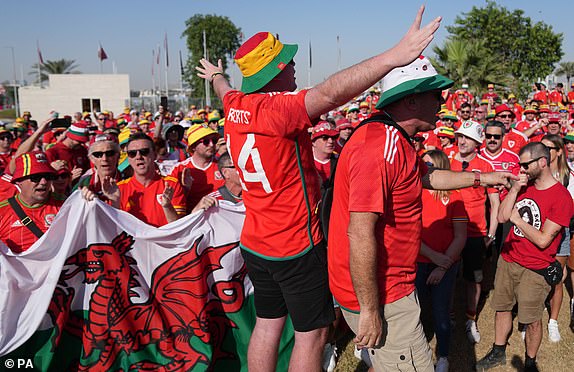 The Premier League will ignore FIFA’s new ultra-strict edict on stoppage time when it resumes after the World Cup.

Sportsmail has learned a number of referees have been shocked at the amount of time being added on in Qatar. And they have sought clarification from the Professional Game Match Officials Limited over whether they will be asked to do the same.

FIFA referees’ chief Pierluigi Collina made it clear officials must add all ‘unnatural lost time’ to the end of each half, which has led to unusually long matches.

The Spain manager also admitted he would love to have moved to England in his playing days refueling rumours that he’ll end up coaching in the Premier League one day.

The unconventional coach was speaking on Twitch, fulfilling his promise to fans to keep streaming for as long as Spain are in the World Cup.

Britons will enjoy a festival of World Cup football today as Wales and England both play crunch matches that coincide with payday for millions with bosses set to let staff watch the matches or face a slew of sickies.

The Welsh could make history this morning if they beat Iran with England set to qualify for the knock out stages if they defeat the USA in the big match at 7pm tonight.

Millions of Britons will watch the two matches today with many schoolchildren in Wales given a break from lessons to watch Gareth Bale and his teammates play at 10am.

It isn’t a World Cup without a Neymar injury to crack up anxiety levels in Brazil.

He damaged his back in 2014 and broke a foot ahead of 2018 and on Thursday night he limped out of Doha’s Lusail Stadium with a strapping applied to his right ankle following a collision in the second half of a 2-0 win against Serbia.

He tried to continue before he was replaced by Antony in the 80th minute, and was in tears as he received medical treatment on the bench, pulling his shirt over his head.

Cristiano Ronaldo made history again on Thursday night then declared he has closed the book forever on his relationship with Manchester United.

The 37-year-old started the week by mutually agreeing to terminate his contract at Old Trafford but he ended it by becoming the first man to score at five World Cups, his 65th minute penalty helping Portugal beat Ghana 3-2 at Stadium 974.

Ronaldo, who already has an offer to move to Saudi Arabia side Al Hilal, was named FIFA’s Player of the Match, which meant he had to attend the ensuing press conference. He stayed in the room for 132 seconds and answered one question but, for the first time, publicly addressed his situation.

The Football Association – along with a number of other European federations – did not attend a crunch pre-World Cup summit with FIFA at which the wearing of the now-banned One Love armband was discussed.

No representatives from the FA and three other nations were present when a UEFA Working Group on Human and Labour Rights delegation met with FIFA officials at their headquarters in Zurich on October 12, in a move that has raised eyebrows in Qatar.

Meanwhile, it has emerged England feared their opening match with Iran may have been stopped should Harry Kane have worn the anti-discrimination armband.

FIFA have not used one referee from a ‘OneLove nation’ at this World Cup, sparking accusations that officials including Michael Oliver and Anthony Taylor are being snubbed.

The highly-rated Premier League pair are among those still awaiting their first assignments, with Germany’s Daniel Siebert and Danny Makkelie of Hollaned also yet to officiate a game.

Seven nations put their names to last week’s statement about the banned OneLove armband. The associations of England, Wales, Belgium, Denmark, Germany, Switzerland and the Netherlands jointly criticised FIFA for threatening their captains with sporting sanctions on the eve of the tournament.

Good morning. Well, we have seen all the teams and a few notable sides – England, Spain and Brazil – have impressed while Germany and Argentina already find themselves teetering on the edge.

Follow along for all of Sportsmail’s updates from what is sure to be another day packed full of action and controversy with both Wales (10:00AM) and England (19:00PM) in action.