Wolves are lining up a move to bring former Everton midfielder Idrissa Gueye back to the Premier League from French giants Paris Saint-Germain.

The Senegal international made the £30million switch to the French capital last summer and has clocked up 31 appearances scoring once in all competitions.

Gueye, 30, made his name in Ligue 1 with Lille before moving to the Premier League with Aston Villa and then Everton where he spent four seasons.

They believe he would be an ideal replacement for Neves who cost them a club record £15.8m from Porto three years ago and is now rated at more than £50 million. 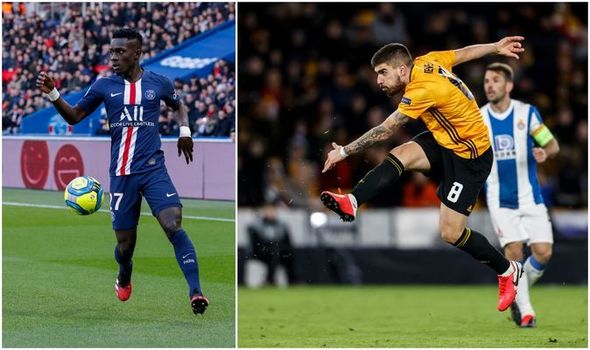 PSG are looking to make wholesale changes to their midfield this summer and are weighing up if Gueye will be surplus to their requirements.

Meanwhile, Wolves wing-back Matt Doherty is not fazed by the prospect of playing behind closed doors.

The Molineux club’s final game before lockdown was a Europa League clash against Olympiakos without fans in attendance.

“It wasn’t ideal. It was a bit strange and the atmosphere between the players felt a bit flat,” he said.

“I feel after one or two games we’ll get used to it and realise it is what it is and that we’ll be able to block out the fact that there are no fans. People might even be better because there are no fans and no pressure in the stadium.”

He added: “We watched the Bundesliga, and nothing has changed. Once the whistle goes, everything will be the same except for no fans in the stadium. We will still be tackling and be beside each other. It is impossible to be social distancing while playing football.

“Most of us have our heads around the fact that once we play again, we will tackle and do everything we can to win and people won’t be shying away from that.”

Wolves return to action against away at West Ham on Saturday, June 20.