Home » Soccer » When defeating Maradona’s part of family lore, soccer is your destiny

When your uncle is a hero in the Basque region because he scored the winning goal for Athletic Bilbao in the final of the 1984 Copa Del Rey to beat a Diego Maradona-led Barcelona, you have plenty of motivation to try and emulate him.

When another uncle started with Athletic and went on to be a professional in Spain’s La Liga and a coach in the English Premier League and at the World Cup, then the family encouragement to take up soccer is even stronger. 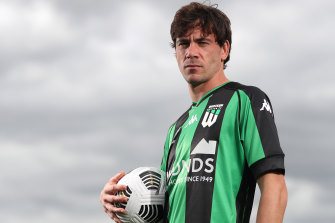 Iker Guarrotxena has quite a family history in soccer, including a brush with Diego Maradona.Credit:Getty Images

And when your father had a spell with Athletic’s youth team, and your brother and cousin also played, then you really have no option but to follow the professional dream.

While he didn’t emulate the feats of his uncle, Endika, who was part of the great Bilbao squad that won the Copa Del Rey and two La Liga titles in the early 1980s, he had a solid career in Spain’s second division, and in Greece and Poland before coming to Australia earlier this year.

He wasn’t born when Endika was becoming an Athletic Bilbao hero, but the family stories are burned into his memory. 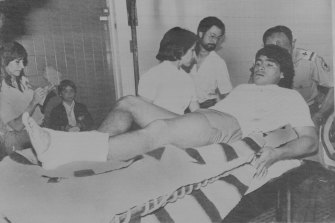 Diego Maradona recovers from a broken leg sustained against Athletic Bilbao while playing for Barcelona.Credit:AP

“I never saw him play but he is so popular in the Basque country because he scored against Barcelona. We grew up with him, we grew up with the strong feeling for Athletic. His son, my cousin, we went together to summer camps, we were a close family so that is why we know so much about him,” Guarrotxena says.

“He is a very calm man. When I was younger he talked to me not so much about the football, but more about the discipline needed, how to take care of your body, nutrition, the need for rest, sleep, lifestyle to be a player.

“My parents were my key for me playing as a young boy, but my uncle would say something if he needed to say something. When we met up for Christmas for dinner or family occasions we would talk about these games, how he would fight against Maradona, against Barcelona, but he didn’t force things.”

When you grow up in Bilbao and you are a youngster who plays soccer you have only one ambition – to become part of the Athletic Bilbao youth system and then go on and play for the senior team.

While there are a number of clubs in that part of Spain, only Athletic has a policy of signing only players born in the Basque region, making it almost a de facto national team.

Aside from Endika, the hero of that 1984 Copa Del Rey final, another uncle, Inaki Bergara (a goalkeeper) also came through the Athletic system and had a lengthy career in La Liga between 1982 and 1995 with a number of other teams.

He is still involved in the sport as goalkeeper coach of the world’s No.1-ranked nation Belgium, where he works with Spanish head coach Roberto Martinez. Bergara has been with Martinez for over 13 years, working with him at Swansea City, FA Cup winners Wigan Athletic and Premier League stalwarts Everton before the pair went to Belgium and took them to the last World Cup.

Iker’s brother, Lander, also plays in Spain’s lower leagues, having been part of the Athletic academy before a heart complaint stymied his career, while his father, Gorka, coached him as a youngster and along with mother Leticia, inculcated him in the cultural and sporting values of Athletic.

So when he was called into the youth set-up he felt not just proud but honoured to be part of a club that had adopted this unique philosophy since its inception in 1898.

“Not everyone goes to the first team, some players go another way but are still in professional football, which is my case. But it is a way to feel proud of my club, proud of my region,” he says.