This season, West Ham United have done a fine job at defeating the teams they’ve been ‘supposed’ to beat, while struggling for results against the Premier League’s top teams. This clash with Leicester, then – a club on similar footing to the Hammers – seemed certain to reveal more about the nerve and Champions League credentials of David Moyes’ players.

The Scot’s team, entering the fixture in sixth place in the top flight and without two of their most influential players in the injured Declan Rice and Michail Antonio, hosted a third-placed Leicester still missing Harvey Barnes, as well as James Maddison and Ayoze Perez – Brendan Rodgersexcluding the pair and Hamza Choudhury from his matchday squad for a breach of Covid-19 protocols.

And in the opening exchanges at the London Stadium on Saturday, the lack of key players on both sides led to a lack of fluidity.

Leicester at times looked as though they were on auto-pilot as they enjoyed greater possession than their hosts, but the visitors were glitching in the final third.

Kelechi Iheanacho, looking to build on his impressive recent form, set out to test Lukasz Fabianski in the early stages, but the striker could only send a tame, low shot into the goalkeeper’s hands before blasting an effort well over the crossbar following a long ball over the top from Jonny Evans.

The Foxes did begin to probe with increasing slickness, though Jarrod Bowen should have done better for West Ham in his attempt to slip Jesse Lingard through on goal during a rare counter-attack. Moments later, the winger threw himself at an Arthur Masuaku cross but connected with the goalpost rather than the ball.

As the half-hour mark approached, another whipped delivery from the wing-back evaded a team-mate at the back post – this time Pablo Fornals – but it found Vladimir Coufal, who teed up Lingard for a curled, first-time half-volley into the bottom corner of Kasper Schmeichel’s net. 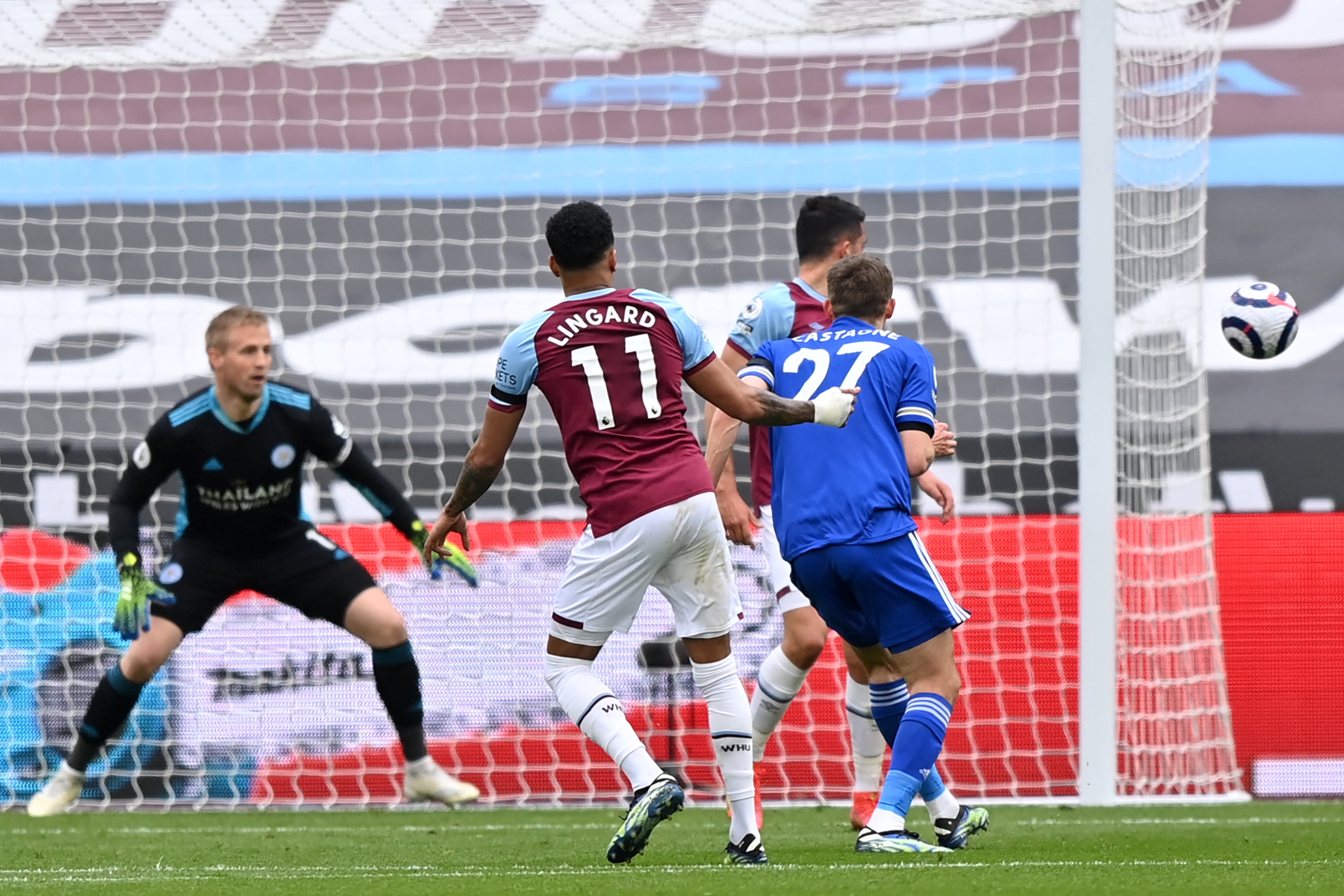 The pre-match quasi-inevitability that the midfielder would score his fourth goal in as many games – and seventh since joining the Hammers on loan from Manchester United in January – had been undermined somewhat by West Ham’s lethargic start to the match, but the 28-year-old’s form was apathetic to the patterns of this tie.

Those patterns were only briefly disrupted by the England international’s goal, with Leicester quickly resuming their attempts to carve attacking openings but exhibiting a bluntness around the West Ham box.

The best chances in what was left of the half in fact fell to West Ham, with Lingard unsurprisingly central to them. First, the midfielder unfastened the Leicester defence on the right flank to release Coufal into considerable space. The right-back hesitated to drive all the way towards goal, however, and also failed to return the ball to Lingard as the loanee surged into the penalty area.

Lingard would repeat the run on the cusp of half-time, on this occasion receiving a pass from Bowen and rolling the ball into an empty net for his and West Ham’s second after Schmeichel found himself stranded on the edge of his box.

The break provided Leicester with a chance to reset, but West Ham would simply repeat.

Two minutes into the second half Bowen turned goalscorer, slotting a low finish past Schmeichel after Lingard and Tomas Soucek had combined neatly in the Foxes’ box.

The moment meant Moyes had now watched his team take a 3-0 lead in a third consecutive game, presenting them with an opportunity to display steelier defence than in their last two outings, which finished 3-3 against Arsenal and 3-2 versus Wolves.

The Hammers’ focus was on offence, however, with Issa Diop finding the net from close range with a header that was subsequently ruled out for offside. The centre-back’s defensive partner Aaron Cresswell had been forced off with an apparent injury moments earlier, and Leicester were spurred on by their let-off and the hosts’ change at the back, which saw Fabian Balbuena come on.

A tidy turn and pass from Iheanacho nearly set up Vardy a few yards from goal, but the former England international was thwarted from close range by a frantic Fabianski dive. Leicester maintained pressure, however, earning a corner that fell to Wilfred Ndidi, whose wild attempt on goal was blazed over the bar.

Then, midway through the half, substitute Marc Albrighton – a replacement for Dennis Praet on the hour mark – swung an appetising cross in for Iheanacho, who was unable to control the delivery.

The Nigeria international had no such trouble in the 70th minute, though. Masuaku fed a careless backwards pass into the striker’s feet on the edge of the West Ham area, and a swift turn and clipped finish saw Iheanacho improve his streak to six goals in his last five matches. 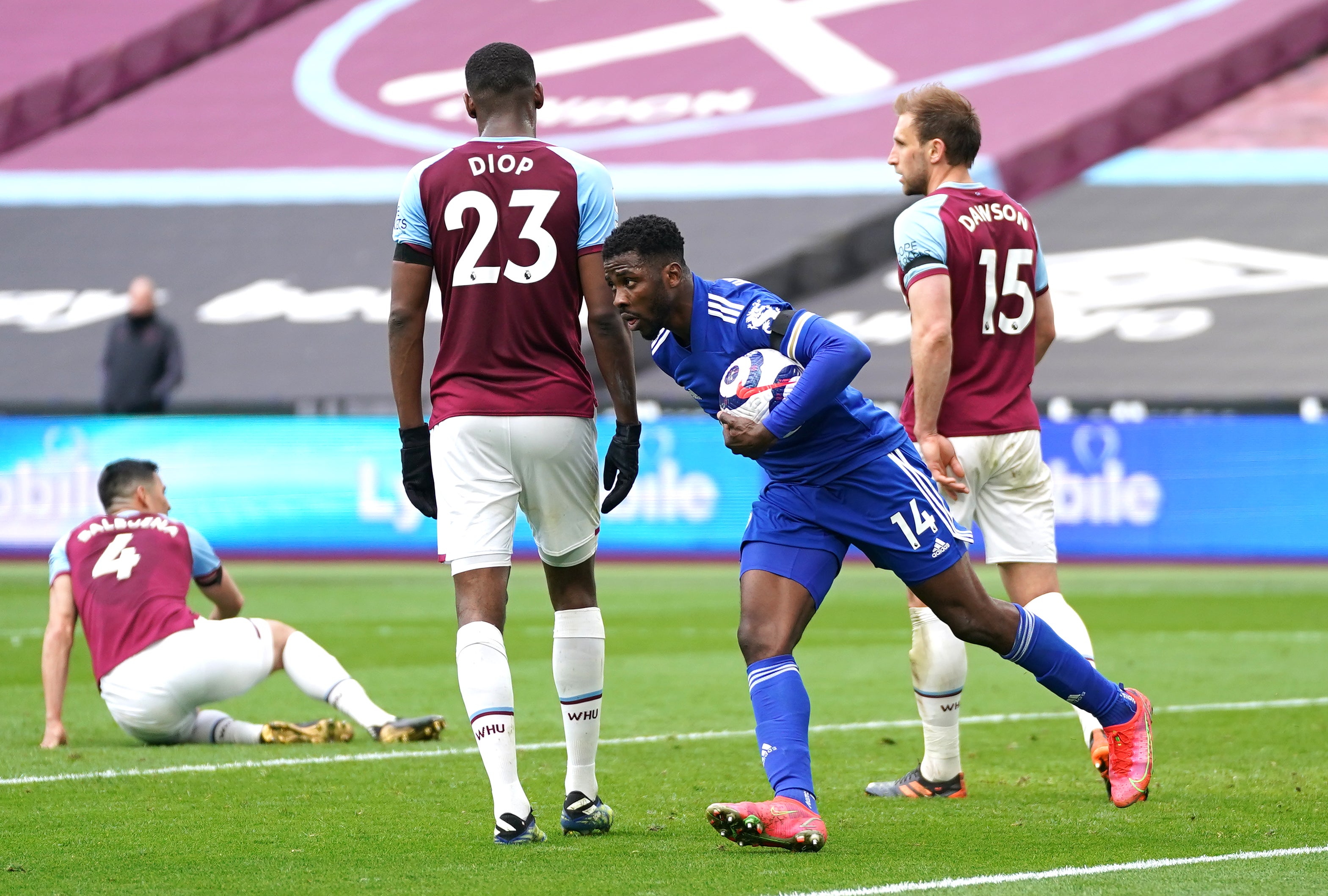 It meant West Ham’s resolve would once more be tested – in this game and in this top-four race.

The endurance of the hosts’ captain Mark Noble – making his 400th Premier League appearance – was also put to the test when the midfielder hit the turf 15 minutes from the final whistle, his arm being nursed by a team medic on the sideline before he returned to the pitch.

As the fourth official revealed there would be six minutes of added time, Iheanacho slammed home his second goal of the afternoon amid scrappy West Ham defending to set up the most dramatic of finishes, but Moyes’ men would scarcely survive and march on in this battle for a European spot, returning to the top four and narrowing the gap to their vanquished foes to just one point with seven matches remaining this season.

At this stage of the campaign, any result could be defining, but West Ham – having recorded a second straight win – will look ahead to fixtures against Chelsea and Everton as admittedly difficult chances to seal a berth in the Champions or Europa League next term. Leicester, meanwhile – having suffered a second straight defeat – will eye upcoming games versus Manchester United, Chelsea and Tottenham as pivotal in their pursuit of a European place.