A disastrous cameo from star recruit Rudy Gestede has heaped further pressure on Melbourne Victory and coach Grant Brebner after a flat 2-0 defeat to the Western Sydney Wanderers.

Ten minutes after coming off the bench for Robbie Kruse, Gestede gave away the 72nd-minute penalty that turned Wednesday night’s clash with an inexplicable attempted scissor kick clearance deep in defence. 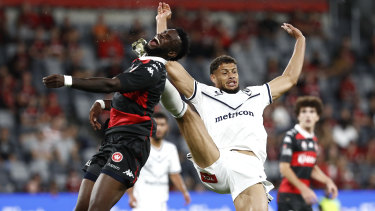 The former Premier League striker could have used his considerable height to reach a bouncing ball but instead went for the spectacular and collected Bernie Ibini in the process, giving referee Alex King little choice but to point to the spot.

Gestede had been yellow-carded only moments earlier and was extremely fortunate to have not been sent off, while Graham Dorrans converted the penalty that put the Wanderers ahead in front of 5376 fans at Bankwest Stadium.

Kwame Yeboah then iced the contest for the hosts in the 88th minute, finishing off a rapid counter-attack sparked by Ibini to seal their third triumph under Carl Robinson and first at home this season. 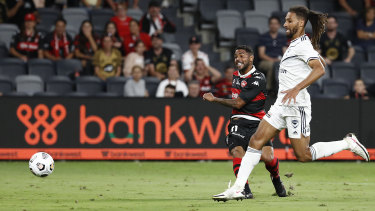 Kwame Yeboah wraps up the points for Western Sydney.Credit:Getty

Gestede threatened to score a header with his first touch of the ball but instead cost his team dearly with his moment of madness, leaving them at the foot of the table with just one win from their first six games.

Brebner, the club’s rookie manager, is already fighting for his job and may not last much longer unless he can quickly reverse the tide and restore the A-League giants to their former glory.

All does not appear well inside the Victory dressing room, with Socceroo Kruse visibly furious with Brebner’s decision to take him off, lashing out on the bench.

Ibini came away unscathed from his run-in with Gestede but he was not the only player to cop a high boot to the face – Victory winger Marco Rojas was taken to hospital with facial lacerations after an ugly first-half clash with Dorrans, Western Sydney’s stand-in skipper. 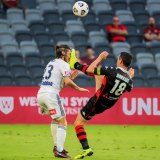 Dorrans went for a loose ball which bounced high but caught Rojas with his studs, forcing him off the pitch a bloodied mess after just 21 minutes.

The veteran midfielder showed no malicious intent in pursuing a ball that was there to be won, but was rightly cautioned and will now miss Saturday’s clash with Melbourne City due to an accumulation of yellow cards.

Dorrans crafted Western Sydney’s best chance of the first half eight minutes afterwards when he spotted Mark Natta in the box with a smart diagonal ball, but the young defender’s header was wide of the mark.

Victory started poorly and while they improved as the half wore on, it wasn’t by much, with Jacob Butterfield and Birkan Kirdar both forcing Daniel Margush into regulation saves – while, at the other end, Max Crocombe had to get low to deny Keanu Baccus just before the break.

The Wanderers returned without James Troisi and Bruce Kamau, who reported groin tightness and weren’t risked for the second half, with Jordan O’Doherty and Ibini sent on.