Melbourne Victory's new coach Carlos Salvachua has a mountain to climb if he is to turn around the ailing giant's fortunes over the next few months, after league leaders Sydney exposed the gulf in class between them and an under-strength Victory by romping to a 3-0 win at AAMI Park. 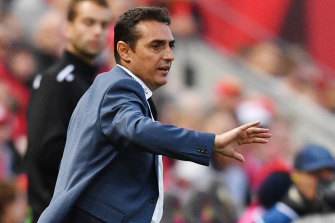 But despite two A-League losses on the spin with him in charge, the Spaniard believes there is plenty of upside for the second half of the season if his team can tighten up at the back and convert the chances they are creating. He is nothing if not a positive thinker.

In the short term things don't get any easier.

Victory players had only a few hours sleep after their loss to Sydney before flying to Japan early on Saturday morning for their Asian Champions League game against Kashima Antlers on Tuesday night. They then fly back to Melbourne – arriving on Thursday morning – where they will spend 24 hours before hopping back on a plane to fly to Perth, where battle-hardened Perth Glory lie in wait in another A-League fixture next Saturday night.

It's a daunting schedule, but the former assistant coach, who was handed the reins less than a fortnight ago following the sacking of Marco Kurz, definitely appears to be a glass-half-full man despite his team facing a challenge to even make the finals, never mind represent a threat.

''We need to take positive things because we are not in a good moment now.'' he said after the game.

And, for him, there were some building blocks. The opening minutes of the gamewere a bright spot. So was the start of the second half, when they pushed hard for an equaliser and might have had one but for an uncharacteristic miss by Ola Toivonen when he had a free header directly in front of goal.

The game might have been different had the big Swede scored, but that is only conjecture. The likelihood is that Sydney, a slick, well oiled and well coached unit, would have simply flexed their muscles and found a way to breach a Victory backline which featured a young Ben Carrigan making his A-League starting debut alongside the veteran Leigh Broxham, who is really a midfielder not a centre-back.

But there is light at the end of the tunnel for Salvachua, even though poor recruitment and previous reluctance to give younger players extensive game time is now beginning to bite.

The signing of Marco Rojas – ineligible for this game because his international clearance had not come through – should give the whole club a major fillip.

As a callow youth, Rojas played his best football in navy blue. Older, wiser, tougher and more street smart after several years in Europe, the Kiwi should bring class, creativity and a goal threat to a forward line which can, on its day, scare any defence in this competition.

The return from Olympic duty of first-choice centre-back and Olyroo skipper Thomas Deng, who has been missing all of January, should also strengthen the rearguard when Victory face Glory.

James Donachie, an experienced defender, was suspended from the Sydney game but he too will be back in time for the Perth match.

Tim Hoogland, the German central defender on whom so many hopes were pinned before the campaign began, is still out through injury having started only once all season. But the former Bundesliga man is progressing and Salvachua hopes to have him back in the line-up as soon as possible.

If it all comes together for the Spaniard, Victory could sneak into the play-offs albeit in a low position which would mean it would have to play any finals fixtures away from home. It has succeeded in this way before, winning the championship from fourth place, but that, on what we have seen so far, would be a very tall order for this group of players.

Still, hope springs eternal and Salvachua's approach over the next three months will show whether he is a candidate to be given the job permanently, or whether he will put in place the building blocks for a successor.

He is keen to give young players a chance: injuries may have forced his hand, but he was not afraid to bring Carrigan in against the best team in the league.

Josh Hope has played in the starting line up and off the bench for him, Anthony Lesiotis is becoming a regular, Brandon Lauton came off the bench against Sydney and Jay Barnett has seen game time too.

The Spaniard is a patient, calm figure, and that will help as he tries to steer the Victory ship through some of the choppiest waters it has navigated since the year of disaster when Mehmet Durakovic and Jim Magilton were at the helm.