Melbourne Victory’s men’s team remains marooned at the foot of the A-League table after having a man sent off in the first half before crashing 3-0 at home to champions Sydney in the first Big Blue of the season.

But their W-League side has at least given fans something to cheer by advancing to the grand final after destroying Brisbane Roar 6-2 in the semi-final on Sunday afternoon. 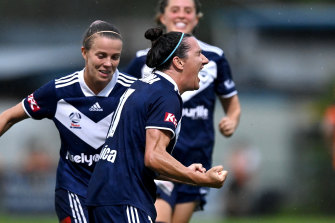 Jeff Hopkins’ women powered into the title decider, with a Melina Ayres hat-trick and two goals to Lisa De Vanna leading the way.

If Sydney fail to beat Canberra on Monday afternoon, Victory will host the championship game next weekend.

Thoughts of title deciders are a world away for Victory’s men’s team, whose nightmare campaign continued in what is now predictable fashion on Sunday night. 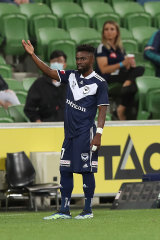 Fans made their feelings clear with boos and jeers – and by showering plastic bottles behind the goal as Sydney players celebrated their second-half goals.

Grant Brebner’s team has been riddled with injury, undermanned and shorn of meaningful contributions from many of its big-name players for much of the season.

But when you are down among the dead men at the foot of the table, scrapping and scrabbling to snatch any point you can, the last thing you need is self-inflicted wounds.

That is what put the A-League’s fallen giants on the back foot after just half an hour of this game when Elvis Kamsoba was given his marching orders for a second yellow card.

The diminutive striker had been booked just minutes earlier when he was judged to have fouled Ryan McGowan.

Kamsoba should have known he was walking a tightrope so when he left a foot in on a challenge on Paulo Retre shortly afterwards he only had himself to blame.

Steve Corica’s Sydney have had trouble scoring all season long but as this game unfolded they knew they would never get a better chance to build their goal difference.

Luke Brattan went close in the fifth minute when he accepted a Kosta Barbarouses pass and, left in too much space, drove a fierce shot from outside the penalty area against Victory keeper Matt Acton’s post. 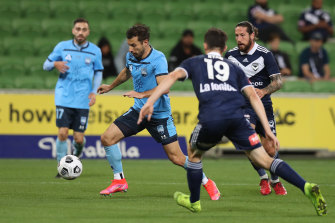 Victory, fielding the same side that toughed it out to gain a gritty 1-1 draw against league leaders Central Coast in Gosford, were reliant on balls into space for Robbie Kruse although Adama Traore tried to take matters into his own hands with a marauding run down the left flank before unleashing a shot which rattled Andrew Remayne’s post.

Shortly after Kamsoba’s dismissal Victory paid the price when Barbarouses linked with Anthony Caceres to set up Bobo for a tap-in. The Brazilian could hardly miss, but Sydney’s approach work merited such reward.

Barbarouses made it 2-0 shortly after the restart, Caceres once again the provider as the ex-Victory frontman was left in too much space before rifling into the far corner past Acton.

After that the game was effectively over as a meaningful contest as Sydney spurned numerous chances and Victory battled to keep the scoreline respectable before Alexander Baumjohann converted a late penalty.

Sydney move into the top six with this win and can build for a charge up the ladder. Victory may soon need a telescope to see where the others are on the table.