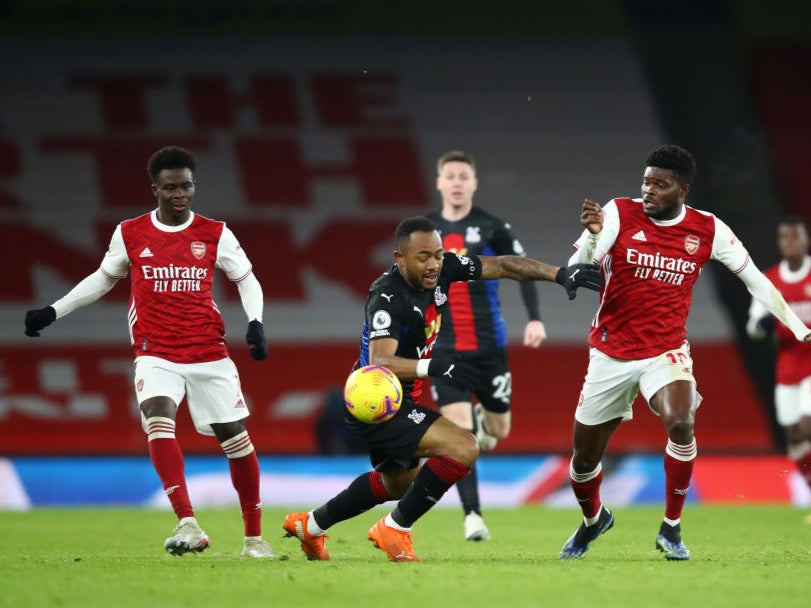 Arsenal lacked inspiration on a freezing night at the Emirates

It made for an open contest, with both sides breaking in swift tides and testing the resolve of one another’s questionable defences. Ainsley Maitland-Niles, replacing the injured Kieran Tierney, surged down the left wing with force but was let down by a lack of final ball. Emile Smith Rowe, the flourishing academy graduate who starred against Newcastle, could not quite tap into that same vein of magic and, in truth, Arsenal were flat and uninspired from the off.

Instead, it was Palace who threatened. Eze’s slippery runs inside incited momentary panic before Zaha’s wild howl beguiled the referee into a foul on the edge of the box, much to the displeasure of Granit Xhaka, who, unsurprisingly, did not accept the slight graciously.

Eze’s attempt soared over the bar and it fell to Arsenal’s captain, Pierre-Emerick Aubameyang, whose form has barely been lifted by his side’s recent resurgence, to provide an antidote to the tedium. An explosive sprint down the left wing left Joel Ward all but stationary and it seemed to inject his side with spirit. A drilled shot swerved violently and was palmed away by Vicente Guaita before Bukayo Saka’s curling effort again sent the goalkeeper scrabbling.

As Arsenal have come to know better than most, though, their moments of promise this season are often shudderingly brief. And while they stuttered, Palace unleashed in a fusillade. Zaha was the driving force behind every attack and often irresistible, even if his moments of ingenuity are played out between fits of sulks and tantrums. Twice he pierced the gap between Rob Holding and Hector Bellerin and fed Benteke, only for the striker’s shots to be easily gobbled up by Bernd Leno.

Leno then incited further angst, hesitating to a floating ball which Tompkins pounced on and the centre-back’s header rocked the crossbar. But the goalkeeper made amends almost straight afterwards, producing an outstanding leap to tip Benteke’s towering header over the bar. If Arsenal had been dreaming of better heights, Palace’s aerial barrage had plummeted them firmly back to earth.

Galvanised by Arteta at half time, Arsenal’s response seemed to catch Palace cold. With their defence ragged, Bellerin seized on a rebound but his drive only managed to blister the side-netting. Saka waltzed into newfound space, Ceballos dictated an increase in tempo while Alexandre Lacazette, who had in fact played the first 45 minutes, finally cast at least some material influence on the match.

But with every drop of added intent, Arsenal left themselves exposed. Zaha, becoming increasingly antagonised by Arsenal’s biting tackles, made a mockery of the space but then seemed left out on his own. It is a great shame that Benteke, whose hold up play remains excellent, seems to have been deprived of his instincts in front of goal, the years of goalscoring rot wearing down his teeth.

Their inability to score increasingly apparent, Palace seemed to take more comfort in a point and, in turn, Arsenal gathered a final wind. In the end, though, despite the introductions of Nicolas Pepe and Eddie Nketiah, they blew little more than smoke on an evening that was relieved to see an end.