ON THE ROAD: Troubled Nuneaton Borough can see the light again following takeover… but it could be a long road back to the top for this famous non-league club

Some new owners walk into a football club and promise big money signings and a trophy parade. For Nick Hawkins at Nuneaton Borough, the first objective was just to get the stadium reconnected to the electricity grid.

This proud non-league club had been in the dark for a while – both in terms of their ownership and, well, literally.

It was before an FA Cup tie with Brackley Town back in September that the back-up generator at Liberty Way ran out of diesel, plunging the stadium into darkness. 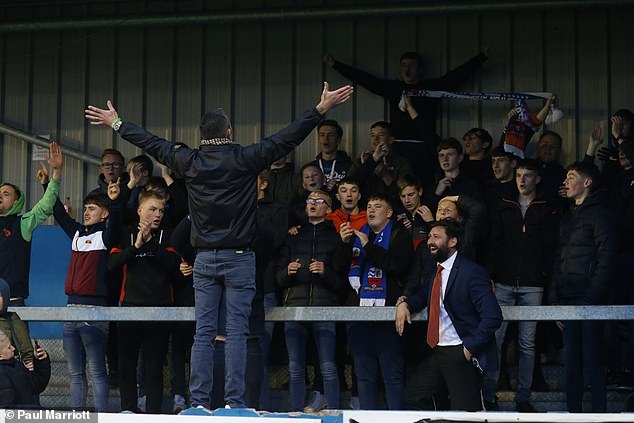 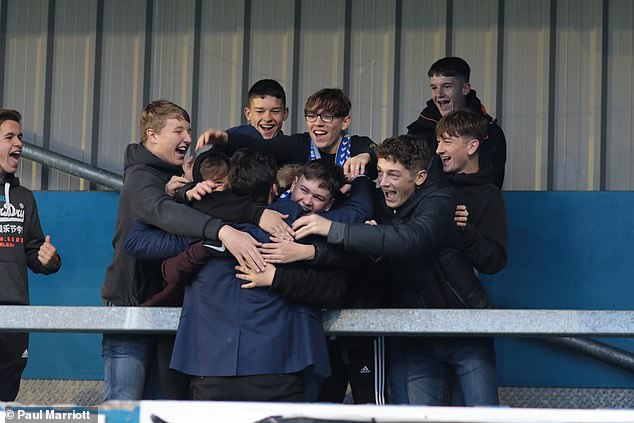 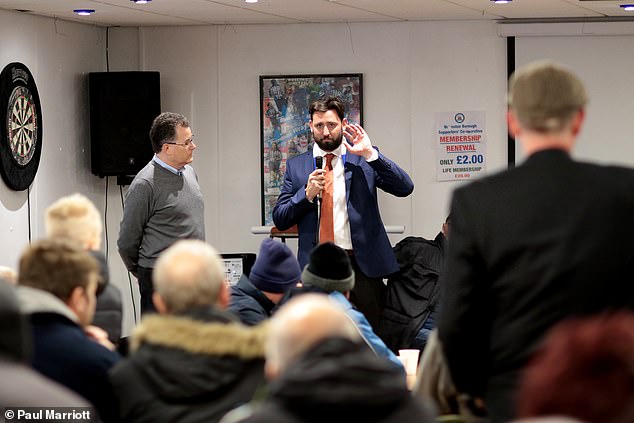 Hawkins, a former non-league player and manager, vowed to rebuild the troubled club 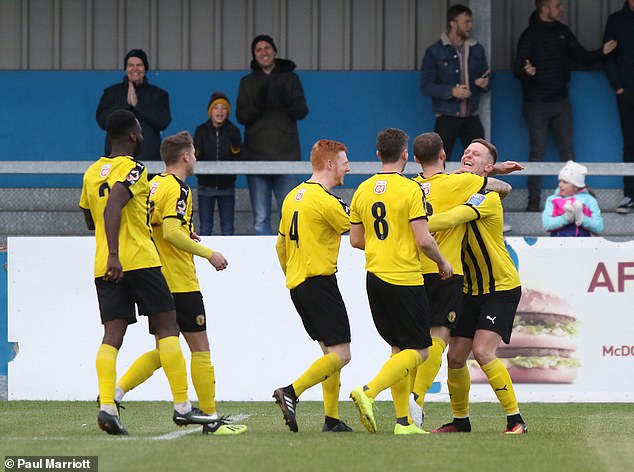 Manager Nicky Eaden was forced to complete his team talk by holding the light of his mobile phone to the tactics board as his players sat in the gloom around him.

That was just the start of the difficulties when previous chairman Lee Thorn took a step away from the National League North outfit at the end of last season.

The club have no payroll, no training ground or kit to train in, cold water in the showers – leading to complaints from visiting players – and their academy had to be disbanded.

The stadium was sold to Port Vale chairman Norman Smurthwaite, but he can’t put in any investment because of rules on dual-ownership. 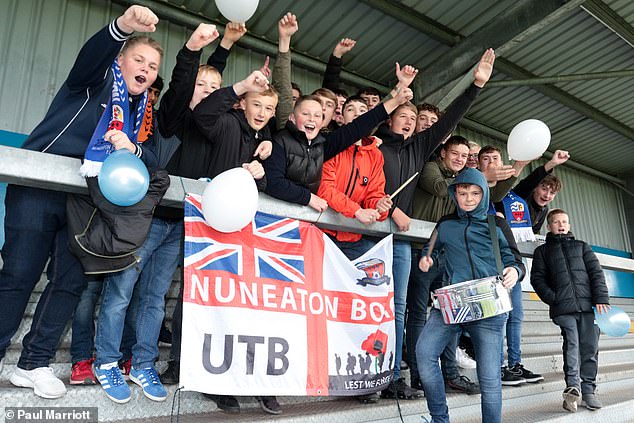 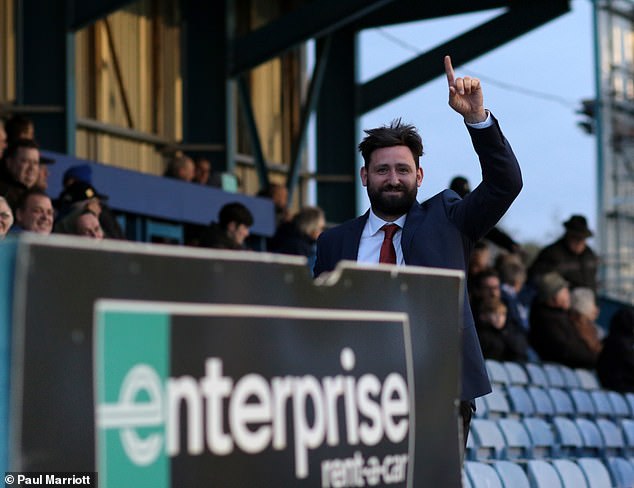 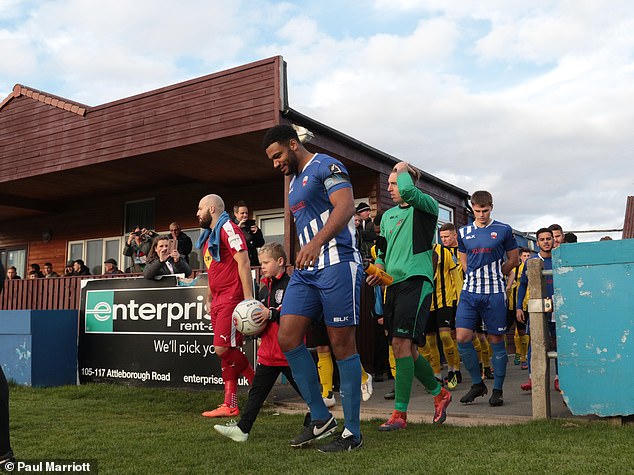 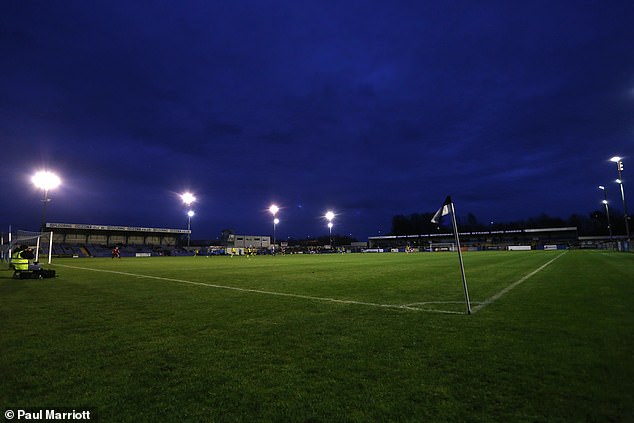 ‘It’s a National League outfit running like a Sunday League outfit,’ says the sharp-suited Hawkins, a former non-league player and manager who completed his takeover on Friday morning.

Eaden runs a refurbishment company, quite handy given his plans to spruce up Liberty Way, which sits on a windswept industrial park and is shared with the local rugby club.

Things like attracting sponsorship and enticing larger crowds will hopefully follow, though Hawkins told fans in the clubhouse pre-match to ‘expect a rollercoaster’ with many tough choices to be taken. 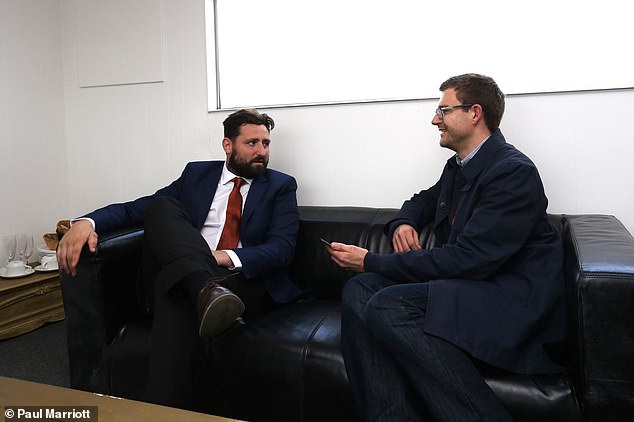 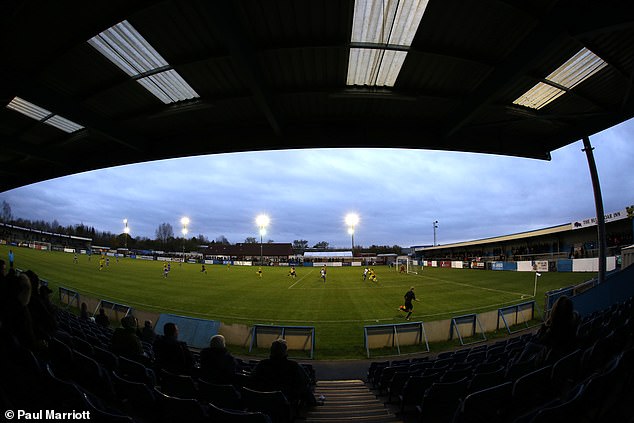 Nuneaton’s Liberty Way stadium, where a crowd of 662 watched the sixth tier match 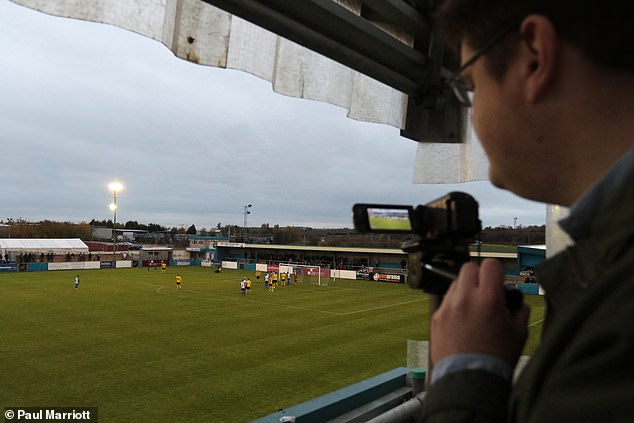 Mark Axon films the action from the ‘television gantry’ at Nuneaton’s 4,500-capacity home 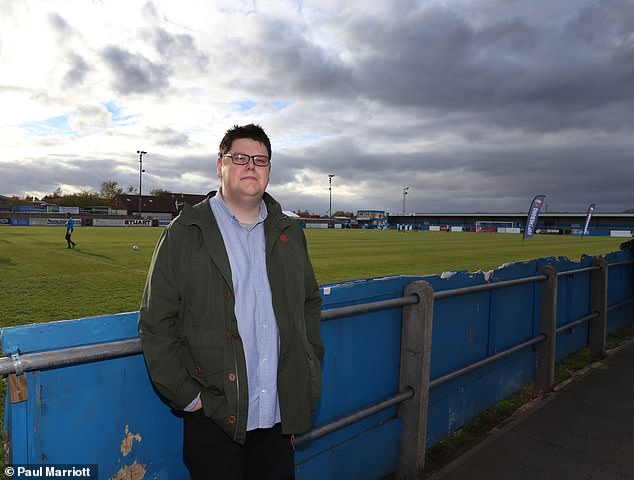 Axon, of the Nuneaton Borough Supporters Co-operative, led efforts for a fan takeover 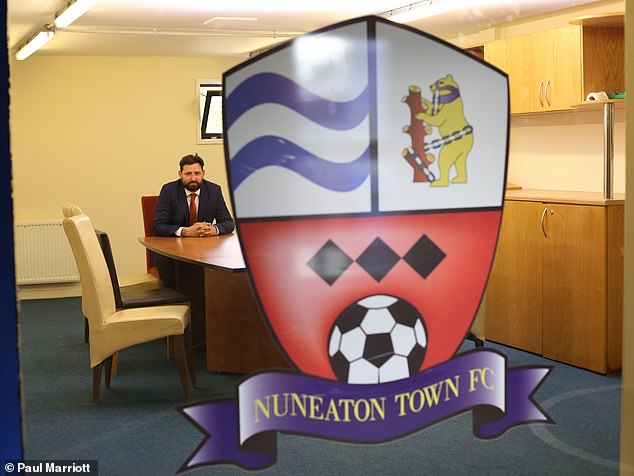 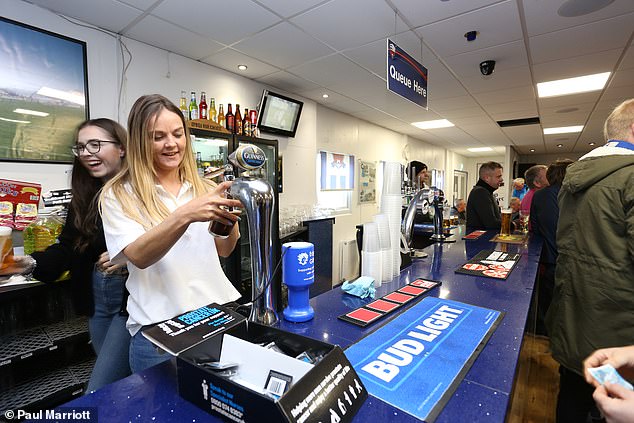 ‘Everyone says I’m mad but here is an opportunity to take ownership of a football club and business that could generate a thousand-odd fans week-in, week-out,’ adds Hawkins.

‘But the vibe I’m getting from people is that sponsorship and partnership links had been lost. None of the stands are named, the stadium isn’t named. It’s literally just a shirt sponsor.

‘Which, for this level, with 20,000 Twitter followers and a local business park round the corner, is borderline shocking.’

It is a sad state of affairs for a club that was a founder member of what is now the National League in 1979 and an FA Cup giant-killer of renown.

‘It is very much hand to mouth for many non-league clubs,’ says Mark Axon of the Nuneaton Supporters Co-operative, who until Friday were preparing a fan-led takeover bid with the club on the brink.

‘It is why clubs shouldn’t be owned by just one person, it should be a collective effort. It is essential we reconnect with the town, without the fans and community, there wouldn’t be any need for the club.’ 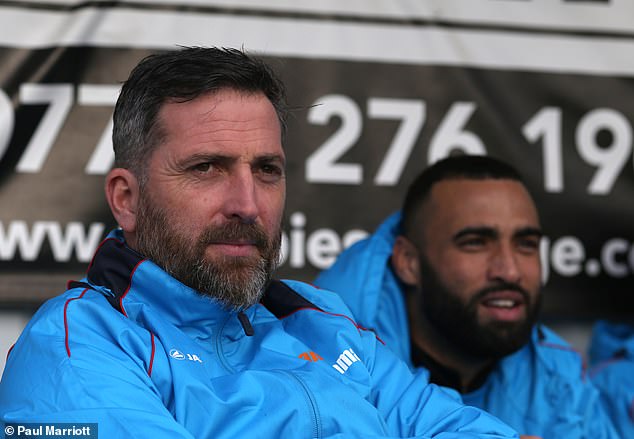 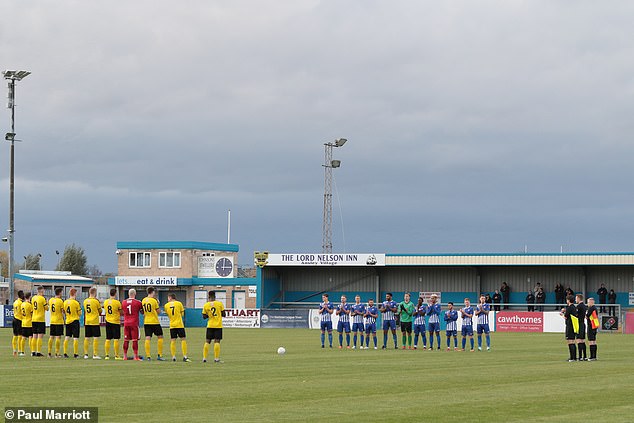 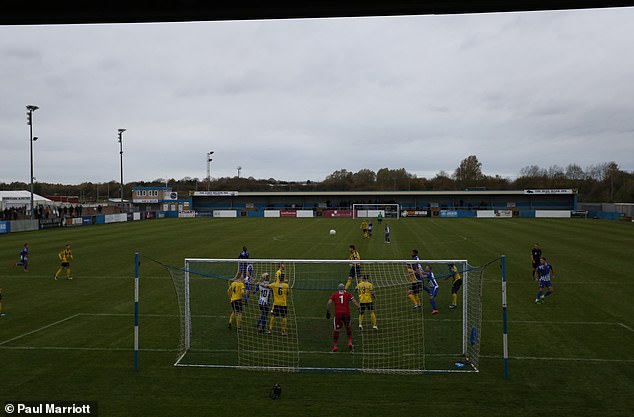 Goalmouth action during Leamington’s 2-0 victory, which sent Nuneaton bottom of the table 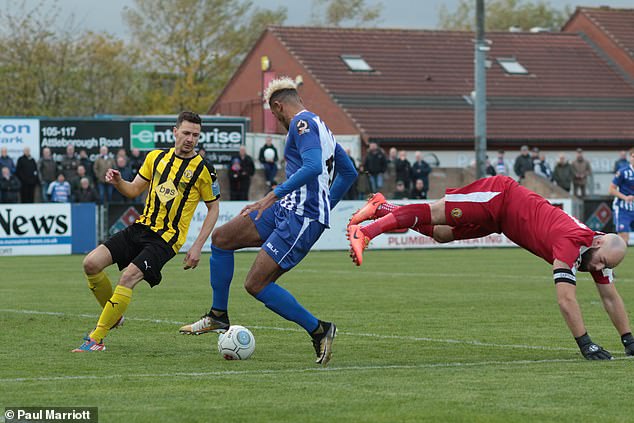 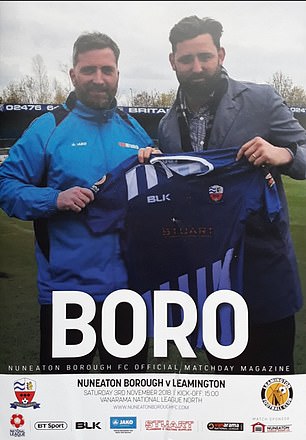 Saturday’s crowd of 662 is slightly higher than average but Nuneaton’s new era doesn’t get off to the best start as local rivals Leamington take an eighth-minute lead through Colby Bishop.

That lead is doubled through Kieran Dunbar on the half-hour despite a glaring offside and the travelling fans rejoice in singing ‘we’re the pride of Warwickshire.’

After the grid-powered floodlights flicker into life at half-time, Nuneaton refuse to crumble though there’s no route back to prevent them slumping to bottom position.

Despite the defeat, the home fans sing throughout, with Hawkins joining the optimistic bunch to clap along for part of the second-half.

‘It has been so uncertain for the past few months, so for the club it is a big cloud lifted,’ says Eaden.

‘But we have to trim the wage bill down, we are changing from full-time to part-time so that will probably not suit some of our players. There will be some upheaval, it won’t be a smooth transition.’ 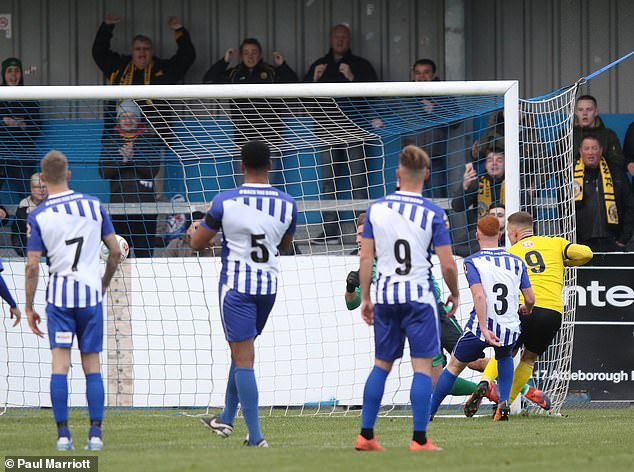 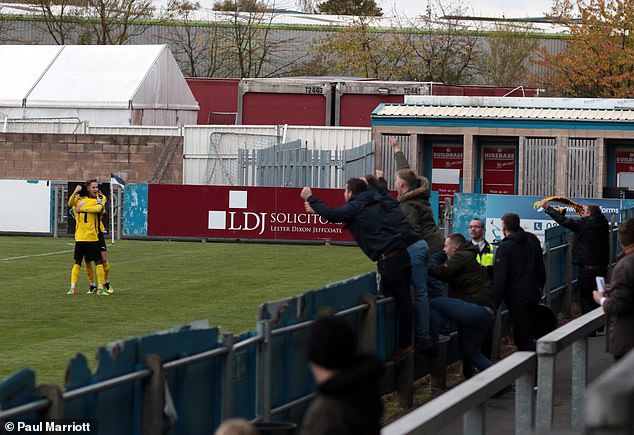 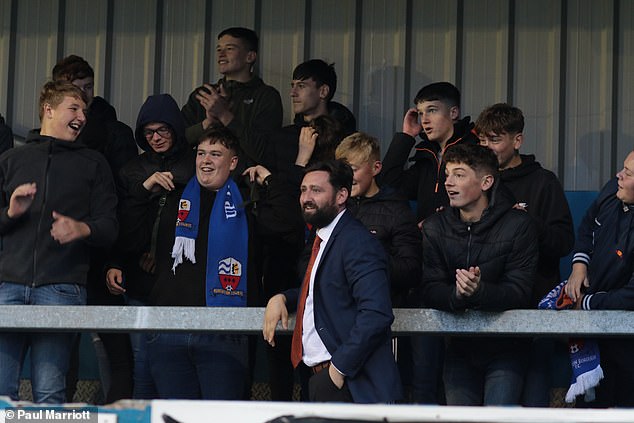 The result lifted Leamington to 12th, more than holding their own in a division featuring such former Football League mainstays as Stockport County, York City, Darlington, Hereford and Chester.

‘Leamington is a good example to any clubs that you can make progress by running a good football club,’ said their manager Paul Holleran. ‘You don’t need a millionaire.

‘We don’t just settle for anything, we try to push. It is difficult but if you do it right, you can compete.

‘We were always a really good step three side, so as a club, are we happy to be a top six side in step three, or do we want to move up to step two where we know it’s going to be difficult? Every day of the week you want to be a step two football club.’

So Nuneaton aren’t quite out of the darkness, even if they can now see the light.