Soccer unites the world, every banner and bigwig here preaches, but its first purpose is to separate winners from losers. For 2022 World Cup host nation Qatar, that became a brutal reality on opening night when they were soundly beaten by Ecuador 2-0 at Al Bayt stadium.

The moral is that it is one thing to win the right to host the World Cup, another altogether to win at the World Cup. In this Muslim country, in this dry stadium, you could say it was for all a sobering experience. 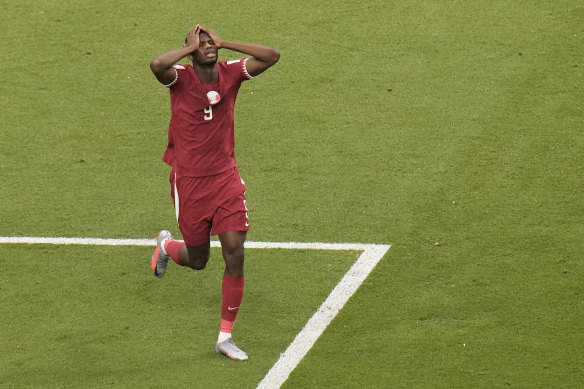 Opening night at a World Cup combines two introductory rites. The first is the song and dance. Qatar’s show was breathtakingly elegant, modestly modern, only mildly alarming when a troupe of dancing Sheikhs brandished their sabres – and mercifully short. What takes the Olympics a whole night takes FIFA barely an hour. If nothing else, they understand that the soccer is the show.

But neither FIFA nor Qatar could not quite let go of the 10-year undercurrent to this World Cup that had rippled to the surface in FIFA president Gianni Infantino’s evangelical sermon from on high the previous day, and echoed in the explanatory notes on opening night.

“The theme of the opening ceremony is a gathering for all mankind, bridging differences through humanity, respect and inclusion,” they read. “Football allows us to come together as one tribe and the earth is the tent in which we all live.” 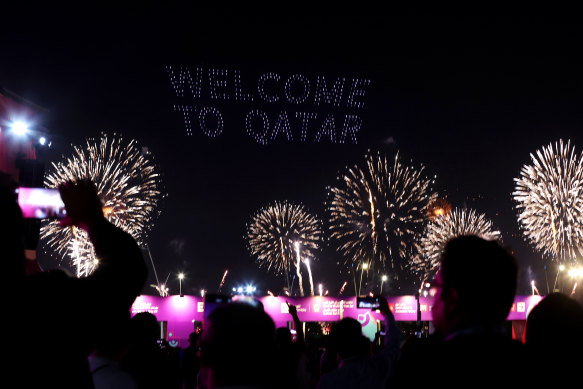 Fireworks explode over the Doha skyline during the FIFA World Cup 2022.Credit:

Amid a stream of the sort of overblown rhetoric that always marks these occasions, World Cup ambassador Ghanim Al Muftah took up the theme during the opening ceremony. “How can so many languages, cultures and people come together,” he asked, “if only one way is acceptable?”

But no one is saying only way is acceptable, rather that some ways are unacceptable. Here’s a yardstick FIFA could use: no men’s World Cup should be held in a country that would not stage a women’s World Cup.

For now, vive some of the difference. When the Emir appeared on the stadium screens to formalise the opening, he got a rousing cheer. Clearly, this not a Western democracy.

Then the soccer began – and just as soon for Qatar it stopped. Ecuador’s veteran striker Enner Valencia, this season’s leading scorer in the Turkish league, playing for Fenerbahçe, had the ball in the net three times in the first half-hour. 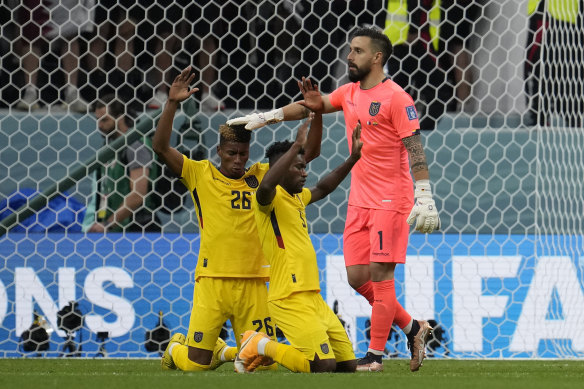 The first was mystifyingly disallowed by VAR, but the other two brooked no argument: a penalty he won for himself and stroked home, then a powerful far-post header. Valencia would be named man of the match.

Qatar did not give a whimper until suddenly, in what was the last play of the first half, striker Almoez Ali missed an open header. They would get no other chance. In the second half, Ecuador safely and expertly sandbagged their advantage.

Qatar thus became the first World Cup host to lose their tournament opener. More might have been expected of the reigning Asian Cup champions. Then again, any team that qualifies out of South America has earned it. In making their way to Qatar, Ecuador scored as many goals as Argentina; they’re a team worth watching.

Peculiarly enough, both these teams are ranked lower than Australia, whose campaign begins on Tuesday night in Doha.

The official attendance this night was more than 67,000, thinning quickly throughout the second half. Except in Ecuador’s corner, they were dressed exclusively in either maroon or white. The maroon was Qatar’s shirt, the white the thobe, the flowing Arab men’s gown. Another notable inflexion in the crowd is that it was overwhelmingly male. Lastly, at the first whistle of the 2022 World Cup, it was pock-marked by empty seats.

For this, there was an alibi. The Al Bayt stadium is in Al Khor, Qatar’s so-called second city, around Melbourne-Geelong or Sydney-Wollongong apart from Doha. Car was the only option and hours before kick-off, the roads were clogged. After all that, Qatar was not quite ready; the transport logistics failed. Infantino will probably say Uruguay didn’t have much of a transport plan when they hosted in 1930, either. These things take time.

At least the visitors in this convoy had a chance to acquaint themselves with this new World Cup frontier. Doha’s skyline is all shapes and formations, like exotic coral growths. Doha is like a theme park for architects.

But the landscape between Doha and Al Khor is pancake flat, unrelievedly white, unvarying in its perma-haze and, to the Western gaze, featureless. The nearest blade of naturally occurring grass is a considerable plane ride away. It is an aesthetic that takes time to assimilate. The same could be said of this World Cup.

For those who made it, the next sensory experience was the stadium. It was built to look like a giant Bedouin tent, and it does. But the Bedouins never had air-conditioning like this. A refrigerated stadium in the middle of the desert? Shivering is believing.

In Qatar, the mountain really has come to the Mohammedans. Or is it simply Mammon?

But there is cool, and there is stone cold. What had been a slow journey to the stadium for the home crowd became a long one home. World Cups can be like that.