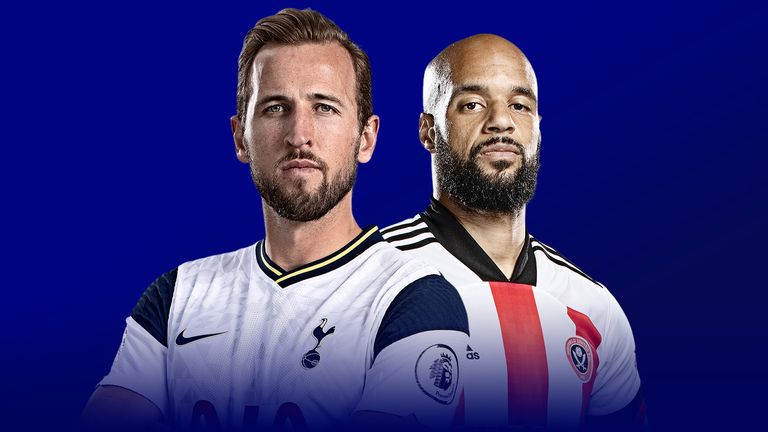 Team news and stats ahead of Tottenham vs Sheff Utd in the Premier League on Sunday (kick-off 7.15pm).

Ben Davies is the only absentee for Tottenham.

Davies has missed the last six weeks with an ankle injury and interim boss Ryan Mason does not know when the left-back will be fit.

Spurs have no other injuries, but welcome defender Joe Rodon back into the squad after he was cup-tied for last weekend’s Carabao Cup final defeat to Manchester City.

Sander Berge is set to make his long-awaited return from injury for Sheffield United.

The Norway midfielder has been out since mid-December with a hamstring problem but interim boss Paul Heckingbottom has said he is ready to be included in the squad again.

Chris Basham (leg) resumed training this week but the trip to London may come too soon for the central defender, who has been sidelined for six weeks. Oli McBurnie (foot), Billy Sharp (thigh) and Jack O’Connell (knee) continue their recoveries.

Tottenham vs Sheff Utd will be shown live on Sky Sports Premier League and Main Event from 7pm; kick-off 7.15pm. Sky Sports customers can watch in-game clips in the live match blog on the Sky Sports website and app. Highlights will also be published on the Sky Sports digital platforms and the Sky Sports Football YouTube channel shortly after the final whistle.

If ever an outright market offered such little value, this is it. Do I want to back Tottenham at 1/4 with Sky Bet? Absolutely not. Do I want to back Sheffield United at 11/1? Absolutely not. That probably means the draw is the play but Spurs’ extra quality in the final third should see them over the line even though they were absolutely dismal in the Carabao Cup final where, to my eye, Harry Kane didn’t look anywhere near his sharpest.

The cards markets is the place to be, though. This Tottenham side are packed full of players who draw fouls for fun. No team in the Premier League this season have won more fouls leading to a booking this season with 74 opposition players picking up a card. Lucas Moura, Harry Kane and Tanguy Ndombele feature in the top 20 for fouls won per 90 minutes by any Premier League player to have played more than 400 minutes this season. Moura sits fifth in that list with a return of 3.05 fouls won per game.

Here, they are lining up against officially the dirtiest team in the league as the Blades’ tally of 63 yellow cards is the most produced by any Premier League side this season. Paul Heckingbottom hasn’t really changed the style too much but he does like to go with a two-man base in midfield of John Fleck and Oliver Norwood. And since he took charge, the tenacious pair have been making nearly two fouls per 90 minutes but have escaped getting booked. I can’t see that lasting another week against such an opponent like Spurs. The 10/11 with Sky Bet for either Fleck or Norwood to be booked rates as the best bet of the weekend when it comes to short prices. Get on.

BETTING ANGLE: Either Ollie Norwood or John Fleck to get carded (10/11 with Sky Bet)

Pitch to Post Preview: Jamie Carragher on Man Utd v Liverpool; Plus: Chelsea’s striker problems and Arsenal’s issues on and off the field

Sky Sports pundit Jamie Carragher joins Peter Smith to look ahead to Manchester United’s Super Sunday clash with Liverpool. He assesses United’s big Europa League semi-final win over Roma and where Ole Gunnar Solskjaer’s side need to strengthen if they are to be Premier League challengers next season. Plus, he gives his verdict on Liverpool’s top-four hopes – and how they can come out on top in their must-win trip to Old Trafford.

Sky Sports features writer Nick Wright is also on the show, discussing Chelsea’s misfiring strikers ahead of their clash with Fulham, and also offering his insight on Arsenal’s Europa League semi-final defeat to Villarreal, what needs to change before next week’s second leg, and the wider ownership debate which has led to fan protests. He also shares his Pitch for what he thinks will happen in the Premier League this weekend!