Home » Soccer » ‘This is important to us’: Wanderers to shun gambling sponsorships, bucking global trend

Many sporting teams talk a good game about giving back to their communities. Actually living up to the pledge, however, is easier said than done – especially when it comes at a financial cost.

Western Sydney Wanderers have teamed up with the NSW Office of Responsible Gambling in a partnership designed to challenge the normalisation of sports betting and raise awareness of the damage it can do to individuals, families and the community at large. 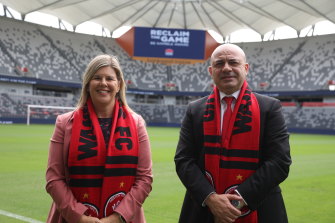 As part of the deal, the Wanderers will refuse all sports betting sponsorships and promotional opportunities, and use players, coaches and staff to educate fans about the risks associated with betting.

In doing so, they are bucking a significant trend in world sport. Eight of the 20 clubs in the English Premier League wear shirts with the logos of gambling sponsors. Closer to home, many broadcasters in Australia incorporate betting ads in their coverage across multiple codes.

Like many clubs, the Wanderers are continually bombarded with sponsorship offers from bookmakers. Chief executive John Tsatsimas admitted it would have been easier – and more financially beneficial – for them to accept those overtures, particularly since the A-League has an ongoing partnership with Bet365.

But Tsatsimas said it was ultimately a choice between either contributing to, or helping resolve, what he believes is one of the biggest issues in their community.

“We’ve always said, we’re not just a football club,” he said. “We can never just be a football club, otherwise we’re another run-of-the-mill organisation in the sporting landscape.

“Some of these issues are very close to home for our members, our fans, our players, our staff. If we’re able to contribute in some way, be involved in something that makes a meaningful contribution – whether it’s awareness, a visual piece that instigates a thought process – then we need to be part of it and see what we can do to develop our club and community programs.

“This is very important to us. We can’t ignore it. The stories are very readily apparent and quick to surface. You cannot say you don’t know about it. I defy anyone to say it’s not a serious issue.”

Wanderers are the first club in Australia to join the “Reclaim the Game” campaign, which was also backed last year by Cricket NSW. As part of it, any club-controlled events or opportunities will be clean of gambling advertisements or discussions in any form.

“We think you should be able to enjoy sport without betting,” said Natalie Wright, director of the Office of Responsible Gambling. “That’s why we’re working with sports codes and teams to Reclaim the Game and get back to what sport is meant to be about. The Wanderers have shown great leadership as the first A-League club to join the Reclaim the Game initiative.”

Meanwhile, Newcastle Jets have confirmed caretaker boss Craig Deans has been installed as the club’s full-time head coach for at least the next two seasons.

Deans has spent most of the past 20 years in the Hunter as either a player or a coach. He has served as interim coach of the Jets on multiple occasions – his most recent spell beginning in October after Carl Robinson’s shock defection to the Wanderers.

Deans has overseen a hugely encouraging start to the new season amid difficult off-field circumstances at Newcastle. His impressive work effectively forced the hand of the club’s temporary owners, who decided he was the right man for the job.

“I’m just very proud to have an opportunity to finally step away from being an interim coach,” he said. “It doesn’t change too much in terms of what the title is, it’s just being able to have a bit of clarity around the direction I want to take the club, with the support of the players. The potential here is massive.”