Home » ‘They got it wrong’: Sydney FC anger at VAR after comeback draw with Mariners

Sydney FC came from two goals down to secure a vital point against the high-flying Central Coast Mariners, gaining a 2-2 draw in an entertaining and controversial match in Gosford. 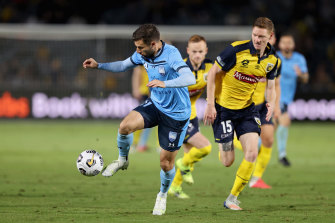 “The decisions went against us,” Sydney FC coach Steve Corica said. “It should have been a goal, it’s quite simple. This is where VAR has got it wrong. We have got them there to get the right decision and really, I saw it, you saw it, [commentator Robbie Slater] saw it, so I don’t know how they didn’t see it.”

The Mariners got off to a flying start against their rivals, with Costa Rica international Urena putting them into the lead with a superb solo strike in the sixth minute. After being played through into space by Oliver Bozanic, Urena dribbled past one marker, deceived another then calmly chipped the ball past Sydney goalkeeper Andrew Redmayne to open the scoring.

Sydney thought they had found an equaliser midway through the first half. Bobo fired home from just inside the box but was flagged for offside, despite replays suggesting the goal should have stood as the ball through came off an opponent playing at it.

While Sydney were reeling from that decision, the Mariners struck. Matt Simon caught Sydney’s defence napping four minutes before half-time, latching onto a pass from Josh Nisbett to calmly slot past Redmayne.

The Sky Blues clawed their way back into the contest on the stroke of half-time when Ninkovic turned Luke Brattan’s through ball into the net with a deft first-time chip, marking his 150th A-League match a trademark classy finish.

Twelve minutes after the restart, the Sky Blues thought they had drawn level again. Bobo turned Alex Wilkinson’s header into the net with an instinctive poacher’s finish, but his strike was again cancelled after VAR ruled an offside Sydney FC player had obstructed a Mariners defender.

There was nothing that could cancel Sydney’s eventual equaliser. Kosta Barbarouses found Buhagiar unmarked in front of goal and the former Mariners forward made no mistake, calmly slotting home to make it 2-2 in the 83rd minute.

Sydney’s comeback was almost completed in injury time. Buhagiar shaved the upright with a first-time shot. Ninkovic then came close to sealing his milestone match in style, forcing a fine save from Mark Birighitti with a curling shot from distance.