Liverpool: Everton struck three times in seven minutes in the second half as they came from a goal down to beat Burnley 3-1 and move level on points with Premier League leaders Manchester United at Goodison Park on Monday (Tuesday AEST).

Ben Mee’s header on his 200th Premier League appearance handed Burnley the lead in the 53rd minute but Everton’s response was emphatic as the hosts came alive to claim their third league victory of the season. 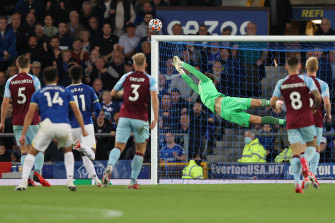 Michael Keane headed Everton’s equaliser in the 59th minute before Andros Townsend curled in a sensational left-footed finish to give Everton the lead. It was his first league goal since joining on a free transfer from Crystal Palace.

Seconds later Demarai Gray went through all alone to slot home Everton’s third goal to the delight of the home fans who had not liked what they had seen earlier.

Everton moved into fourth spot with 10 points from four games, level on points with Liverpool, Chelsea and United.

Burnley had been the better side in the first half but are still awaiting their first league win of the season and remain on one point in 18th place. 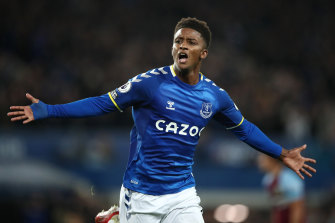 Former Liverpool manager Rafa Benitez’s arrival at Goodison was not universally popular among Everton’s fans but they have started the season in style, scoring 10 goals in four games.

They were dealt a blow before kick-off with striker Dominic Calvert-Lewin ruled out with a broken toe and for much of the first half they were second-best against a fired-up Burnley.

Chris Wood should have put the visitors in front early on but failed to make proper contact with his header after a superb ball into the area by Dwight McNeil.

Everton’s only real chance before the break was when Townsend picked out the run of Abdoulaye Doucoure whose first-time angled effort was well saved by Nick Pope.

It was only after Mee headed Burnley in front that Everton came alive and Townsend was the catalyst.

He showed great feet to engineer some space on the right wing before whipping in a perfect cross for Keane to glance in his header.

Townsend had gone almost a year without a Premier League goal but his effort was worth the wait.

Picking up the ball in a central area he jinked his way forward before sending a curling, dipping left-footer into the top corner of the net.

“My mum is always sending me compilations of all my goals, she told me to watch it when I can and maybe I reminded myself I can do it and pulled it out,” Townsend said of his effort.

Doucoure then split the Burnley defence to send Gray clear and calmly beat Pope before Doucoure himself had a goal disallowed for offside as Everton ran riot.