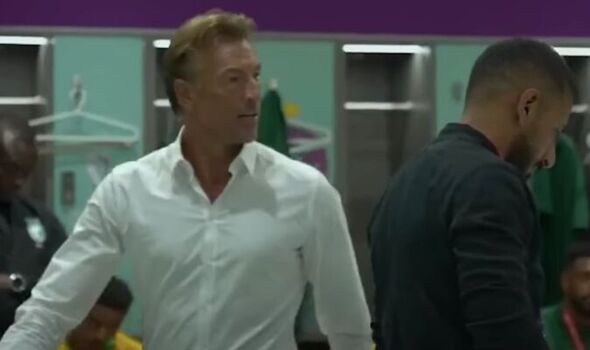 Saudi Arabia Herve Renard told his players to take their phones out with them for the second half if they wanted to take a picture with Lionel Messi. The furious Frenchman was attempting to gee up his depleted squad as they trailed Argentina at half-time of their Group C opener and his message seemingly struck a chord as the underdogs came from behind to stun the Copa America champions.

PSG superstar Messi had given Argentina the lead from the penalty spot before Saudi Arabia came roaring back.

Second-half goals from Saleh Alshehri and Salem Aldawsari did the damage as the Middle Eastern nation pulled off one of the biggest World Cup upsets of all-time.

Footage has now emerged from inside the Saudi dressing room at half-time, where Renard rallied his players with a remarkable speech.

He shouted: “What are we doing here? Messi in the middle of the pitch, he has the ball, you stay in front of the defence.

“Take your phone out, you can take a picture with him if you want.

“You are in front of the defence, if he’s coming you follow.

“Did you see what you did? Do you not feel something?

“Come on guys, this is the World Cup! Give everything!

“When you are at the end of the match, you’ll be like this. Come on!”

Renard has a very credible C.V. at international level having guided Zambia and Ivory Coast to Africa Cup of Nations glory.

Incredibly, he was also sacked by Cambridge United way back in 2004 during a brief spell in England.

Speaking after the game, Messi declared there were no excuses – suggesting that Saudi more than deserved their victory.

“We knew that (Saudi) Arabia is a team with good players, that moves the ball well and that advances the line a lot. We work on it, but we speed up a bit,” he said.

“There are no excuses. We are going to be more united than ever. This group is strong and they have shown it.

“It is a situation that we did not have to go through in a long time. Now we have to show that this is a real group.

“It’s a very hard blow for everyone, we didn’t expect to start like this. Things happen for a reason. We have to prepare for what’s coming, we have to win or win and it depends on us.

“We have to go back to the base of who we are. We have to think about what’s to come.”