Alashkert 0-0 Rangers (0-1 on aggregate): Keeper Robby McCrorie gets KICKED IN THE HEAD but bounces back to keep clean sheet as Scottish champions overcome Covid crisis to advance to Europa League group stages

Robby McCrorie, Europa League hero. Well ain’t that a kick in the head?

On a sweltering night in Armenia, third-choice Rangers keeper McCrorie took a boot to the bonce from Brazilian brute James – red-carded for the second of two eminently bookable offences – but bounced back to keep a cool clean sheet.

And that was enough, despite a seriously scrappy second half against ten men, to see Scotland’s underwhelming champions securely – if not remotely comfortably – into today’s group stage draw. 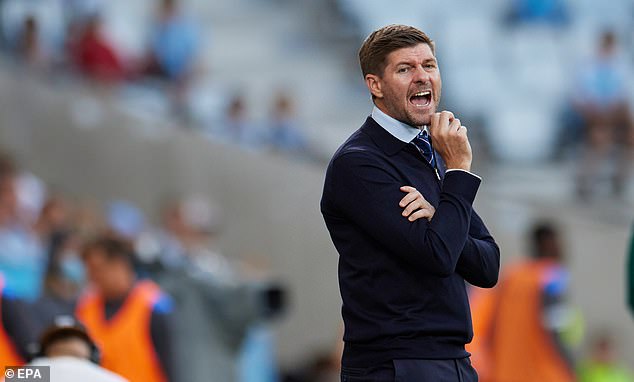 Covid crisis averted, then. If Celtic’s analysts might not be terrified by anything they see while scouring replays of this performance by Rangers, well, there will be time enough to mull over the implications of that between now and Sundays’ meeting of Scottish football’s Big Two.

All that mattered last night was getting through. And, in stifling conditions in the former Soviet republic, Steven Gerrard’s men – without their self-isolating manager and half a dozen members of the playing squad – ultimately had too much for their hosts.

A bottom-of-the-bill contest boasting all the glamour associated with a 4 pm kick-off on a night when four Scottish teams were in action, this still just about qualifies as a famous victory – on aggregate – recorded in arduous circumstances.

The bare facts show that Gerrard only made four changes to the starting XI; not such a bad outcome, when you consider the scale of the Covid cluster that dominated the build-up to this one.

But the specifics of one personnel switch, in particular, always felt like it might matter more than the headline number.

The life of a third-choice goalkeeper is rarely glamorous. The most they can usually hope for is a steady diet of boredom and frustration – interrupted by moments of optimism and hope.

McCrorie, having served his apprenticeships on loan at Queen of the South and Livingston, could never have expected his big break – a make or break, maybe – to come like this.

In the absence of Allan McGregor and back-up goalie Jon McLaughlin, though, the 23-year-old would have been eager to seize his chance.

Talking of taking opportunities … Alfredo Morelos will wonder just how he blew two absolutely golden chances inside the opening half hour here.

Just 11 minutes had elapsed when, thanks to the intense pressing of Scott Arfield and the lively Joe Aribo, the ball ricocheted ion the path of Morelos just 12 yards from goal.

With only the keeper to beat, the Colombian striker blazed his right-footed effort high over the bar.

Over in the away technical area, the on-duty coaching team of Gary McAllister and Michael Beale would have been as frustrated by the miss as they were encouraged by Alashkert’s laxness in trying to play out from the back.

Three-and-a-half thousand miles away, an isolating Gerrard would surely have been shouting at the telly as Morelos squandered an even more clear-cut opportunity after 30 minutes of play.

Sent through one-on-one by a deft Arfield pass, the in-demand striker rather ambled towards goal without any great conviction, then hit a mediocre shot that hit Alashkert keeper Ognjen Cancarevic in a particularly delicate spot.

As irksome as those squandered openings might have been, Rangers were in control.

True, young Nathan Patterson being dummied into diving in for the ball by James early on, leading to a dangerous break, would have been a concern.

But the excellent Aribo had forced Cancarevic into a full-stretch save with a curling left-footed strike. Just one of several efforts in a dominant first half.

And, of course, the odds tilted significantly in their favour thanks to not one, but two, moments of petty madness from James.

With 36 minutes on the clock, he was booked for slamming the ball into the ground after a bit of Aribo brilliance had won a free-kick for Rangers.

Barely two minutes later, he compounded his crime by clearly flicking out at the head of McCrorie as the goalie came out to gather a through ball.

Never mind a second booking, the South American could easily have been shown a straight red by Bundesliga ref Tobias Stieler.

McCrorie, mercifully, was OK to continue after treatment. At that moment, plenty would have offered much more than a penny for the thoughts of young Jay Hogarth – just 18 – as he contemplated the possibility of a rapid battlefield promotion.

Now, we all know what happened when Rangers were handed a man advantage in their Champions League qualifier against Malmo.

But surely now, a goal up against opponents insistent on playing out from the back despite being short of a body, the Scottish title holders would finish the job.

The home side were duty-bound to at least have a go, of course. And things might have been different for them had Aleksandar Glisic put away a very good chance instead of heading over the bar from close range just minutes into the second half.

How Jose Embalo completely failed to connect with a low cross from the left six yards out, meanwhile, may remain a mystery for some time; for a spell, the hosts looked capable of putting dangerous balls into the box with far too much ease.

There were some seriously worrying moments right up until the final whistle, as a flattened Rangers – looking out on their feet and sitting far too deep – relied on desperate defending.

They had chances themselves, though. None better than another one wasted by Morelos, who completed his hat-rick by blazing over the bar from Patterson’s superb cross.

For once, the totemic striker wasn’t the main man, the game changer, the guy who made all the difference.

In a game short on big moments, that honour surely goes to McCrorie. Mainly because he went mostly unnoticed.

The rookie was solid and dependable, saving the efforts he should save – and picking up a battle scar that, for a day or two at least, he’ll wear as a badge of honour.

Oh this? Yeah, I got kicked in the head. While playing in goal for Rangers in Armenia the other night. How did we get on? Well, let me tell you.