How do Erling Haaland and Jack Grealish fit into Pep Guardiola’s Man City system? With a £200m summer splurge being prepared, Sportsmail examines how next season’s starting XI could look at the Etihad

If Manchester City get what they want this summer, next season could be looking particularly rosy indeed for England’s champions-in-waiting.

City are on the verge of reclaiming the title which they surrendered to Liverpool last year, and Pep Guardiola is showing all the signs of a man who does not want to see it pass up ever again.

Never one to shy away from the transfer market, City are set to plunge in once more at the end of the season and two targets have shot straight to the top of the priority list. 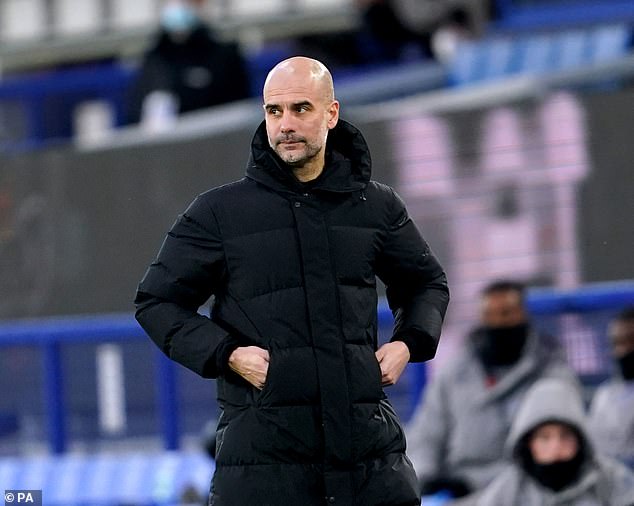 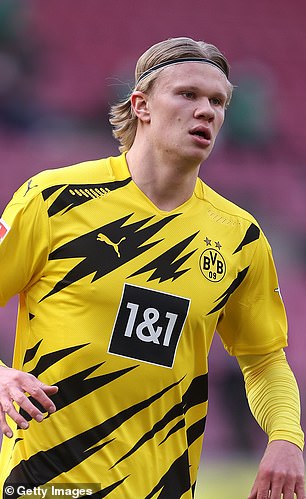 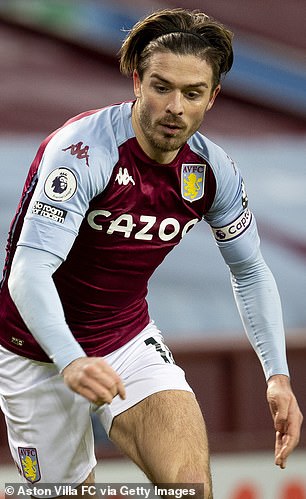 As reported by Sportsmail this week, both Erling Haaland and Jack Grealish are seen as necessities for City as Guardiola prepares to reshape his starting XI and add an injection of youth.

Riyad Mahrez, Ilkay Gundogan and Kevin De Bruyne will all be 30 before next season begins, meaning City have one eye on the steadily-rising average age of the squad.

Thankfully for Guardiola, many of the stars are still at the top of their game, while it is hoped a new contract can be finalised with De Bruyne in the coming months to secure his best years at the Etihad.

With the possible double arrival of Haaland and Grealish, however, City would be a tantalising force going forward.

Guardiola will be presented with a variety of ways to incorporate them into his side, for which the master tactician inside him will be particularly thrilled.

Sportsmail took a closer look at what Haaland and Grealish would bring to the table for City, and how they could slot into the already-impressive system…

It’s a given what Haaland’s role in the City side would be. The 20-year-old is a ruthless scoring machine and that is exactly what Guardiola’s team needs.

There will be little tinkering with Haaland’s position. He’ll be up top, through the middle, quite often operating as a lone striker.

A lone striker that is, without the direct support of a partner.

Instead, Haaland will have a star-studded string of support alternating around him, though more of that later.

The Norwegian is statistically the most prolific forward inside the area in each of European football’s top five leagues.

In 21 Bundesliga matches this season Haaland has 21 goals. 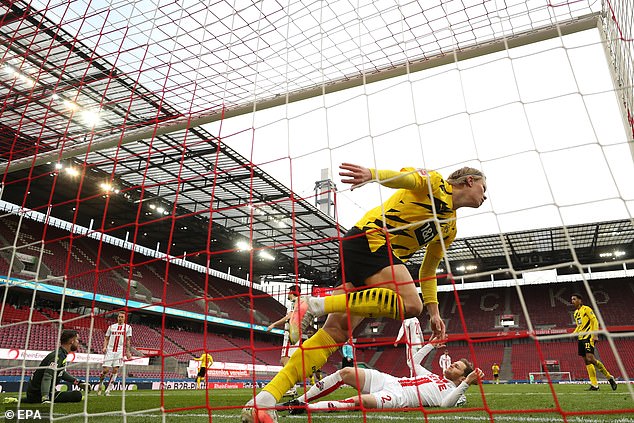 At Borussia Dortmund, Haaland has continued his rise to become Europe’s top marksman

Despite missing time through injury, the striker has regularly come straight back into the side and picked up where he left off. Haaland also has eight league assists to his name so far this season, along with 10 goals in the Champions League.

For City he would be the replacement for Sergio Aguero, who is vacating his throne after 10 years of service.

Guardiola is understood to want a bonafide goalscorer to come in and start hitting the back of the net from the get-go, and Haaland is said to be first-choice, even ahead of Tottenham’s Harry Kane.

The Norwegian will lead the line and Guardiola will assemble his forces so as to find Haaland inside the box in order for him to do what he does best.

The pace of Raheem Sterling on the wings will certainly contribute, while the work-rate and inventiveness of both Phil Foden and Bernardo Silva will play pivotal roles.

Yet this is where Grealish comes in, for what could be a perfectly planned move by Guardiola…

The likelihood is, Guardiola will deploy a line of three behind Haaland as a supporting cast to engineer the goals.

Grealish immediately appeals in this regard, and it’s clear to see why City are flagging an interest.

The 25-year-old has been operating in a similar style for Villa for years, and his rise over the past 24 months has been nothing short of meteoric.

Grealish has proven himself to not only be good enough for the Premier League, but one of the best ball-carriers and retainers in English football. 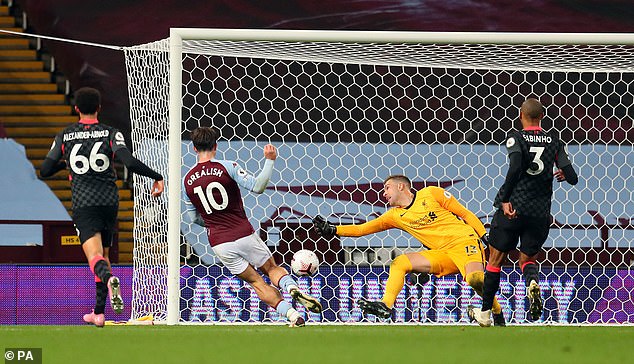 He works hard, is notoriously strong in possession and always shows for the pass. It is an ideal set of traits for Guardiola as he plans for the future.

Grealish is also a frequent dribbler, and is the most fouled player in the top flight alongside Crystal Palace’s Wilfried Zaha.

This is a valuable asset for City, with Guardiola planning to use Grealish’s ability to carve openings and run with the ball at feet in order to create space for Haaland to run behind into.

With Haaland as the main man, City’s Spanish boss would have the option to play Grealish immediately behind him, with supporting wide play from both Sterling and Foden. Or, if the game suits, Bernardo Silva.

The older options, such as Mahrez, would then be able to present a formidable option from the substitutes’ bench, whether that appeals to him personally or not.

Grealish knows the Premier League inside out and, as he has shown on England duty, is well accustomed to stepping up his game to play alongside elite-level stars.

The step up from Villa to City isn’t expected to be an obstacle for the playmaker, and Guardiola will be hoping Grealish could soon become a cohesive cog slotted in between club icon Kevin De Bruyne and potential fellow arrival Haaland.

City’s forward line relish the chance to alternate during matches, meaning Grealish could very likely switch in and out of position with Foden on the flanks, and allow the academy graduate to occupy the central position. 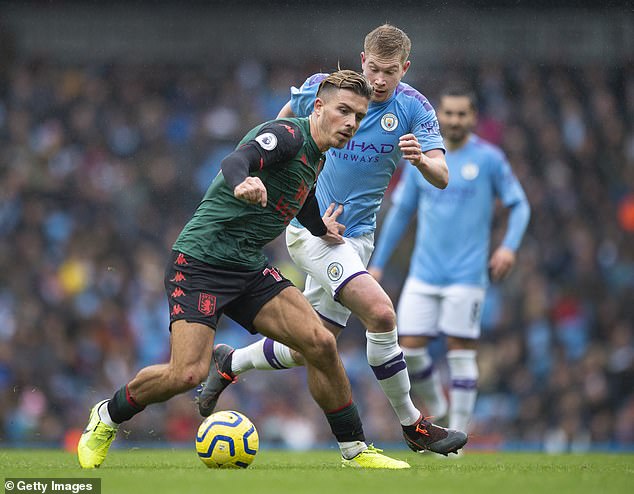 The same principle applies with Sterling.

One notable impact of this system, however, could see De Bruyne take up an ever so slightly deeper role in midfield, likely sitting alongside or in front of Guardiola’s trusted general Rodri.

The deep-sitting star is seen as the heir to Fernandinho’s throne, providing a layer of protection for the defence while De Bruyne weaves his magic just ahead.

With Rodri just 24, this would mean that De Bruyne, next season, would find himself as one of the veterans of the side, as he prepares to turn 30 in June.

Likewise Gundogan, it must be noted, has been sublime for City this season and is a contender for PFA Player of the Year. However, history shows the German is one of the most unfortunate when it comes to injuries.

This season Gundogan has been particularly lucky in that he has stayed fit and healthy, and the majestic form has flowed as a result.

Next season, with a slight tweak to the midfield, Gundogan may see a lot more of his football coming from the bench.

Given his body’s track record and the fact he will turn 31 at the end of the year, having such a talent as an option from the sidelines is something City could benefit hugely from.

The graphic below illustrates how both Grealish and Haaland could slot into the City XI, and how the team would adjust as a result. 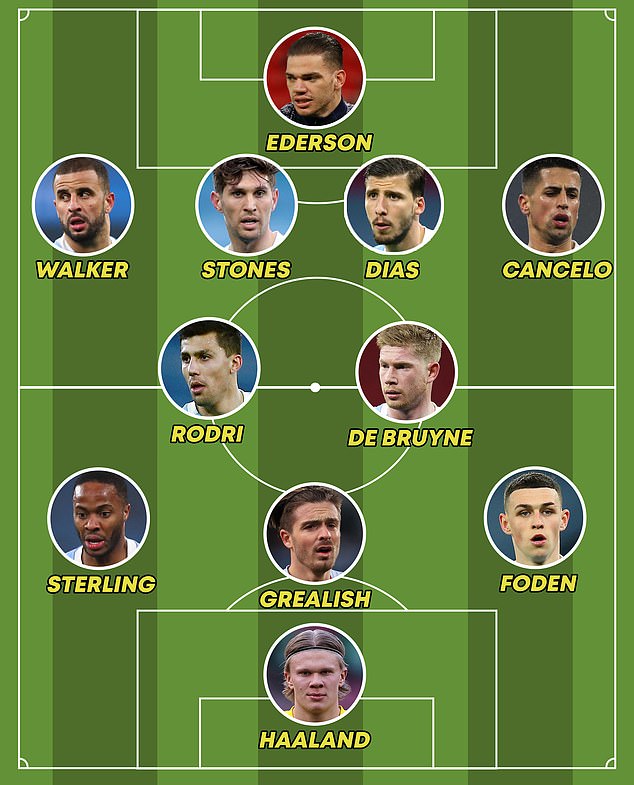