‘This is a group of champions and they are hurting’: Real Madrid caretaker Santiago Solari urges squad to show ‘character’ following Julen Lopetegui’s sacking and nightmare start

Lopetegui was sacked on Monday evening after taking charge of just 14 games, with Sunday’s embarrassing defeat at the Nou Camp leaving Real ninth in La Liga.

B-team coach Solari was placed in temporary charge after the former Spain boss’ dismissal and quickly moved to assure fans that his squad will recover. 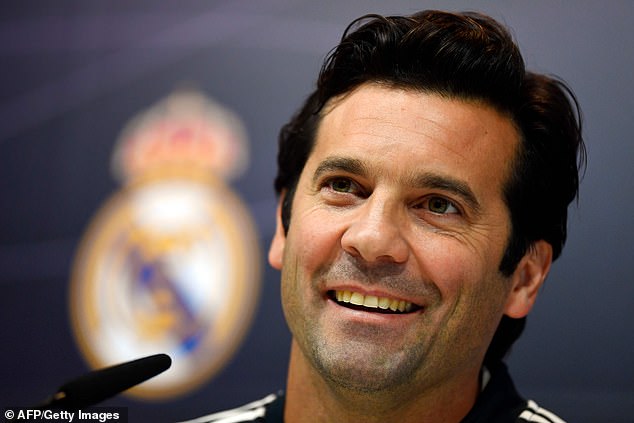 Speaking in his first press conference on Tuesday after taking training, Solari said: ‘This is a group of champions and they are hurting at the moment. It is not an easy situation but we must reverse it.

‘This is a delicate moment but it is in these situations when your true character comes to the fore.

‘Going through life, is like this job, everything can change very quickly. The important is the day to day work and what we put into it.’

Solari, who played for the club between 2000 and 2005, is relishing his chance to step up and work with the first-team as president Florentino Perez considers candidates including Antonio Conte, Mauricio Pochettino and Roberto Martinez.

‘Working for Real Madrid is a great opportunity,’ he added. ‘I sweated every last drop when playing for the club like many others.

‘(Zinedine) Zidane is an all-time great and we will leave it at that, we cannot compare ourselves to him.’