They call Leipzig the hero city in this part of the world on account of the role the demonstrations here played in the fall of the East German regime.  Brendan Rodgers’ vastly depleted Celtic side simply didn’t have enough of them.

As in Salzburg a few weeks ago, matters started promisingly for the Parkhead side. As with so many of these occasions down the years, it did not last. A weary old story of individual errors, lapses in concentration and profligacy on the road played out yet again.

After asking some questions of RB Leipzig for half an hour, all hope of recording just a third win in 44 group stage matches away in Europe was lost in four painful first-half minutes when Matteus Cunha and Bruma took turns to punish some woeful defending from the visitors. 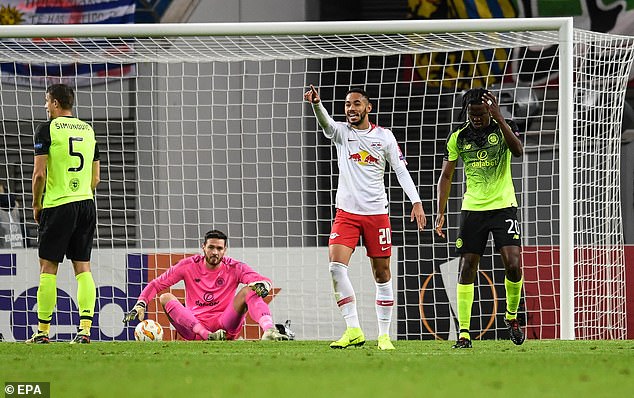 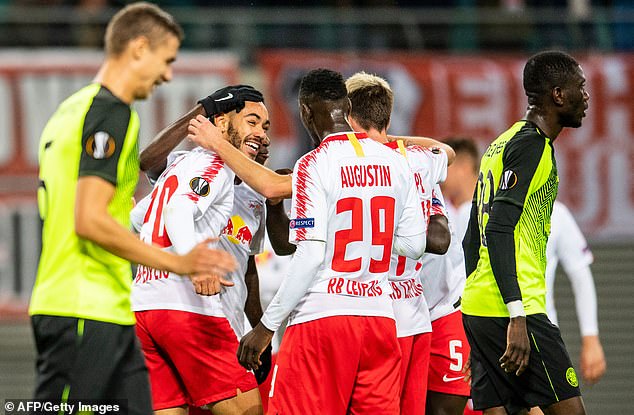 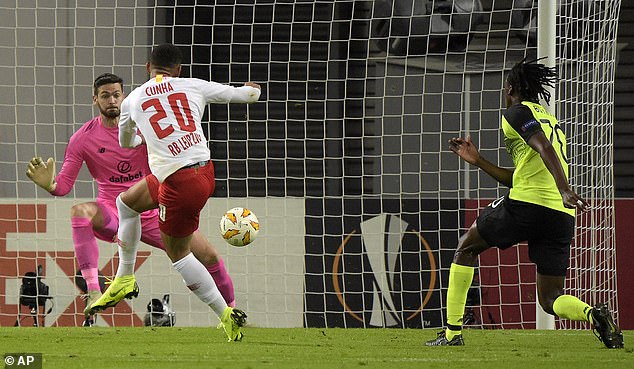 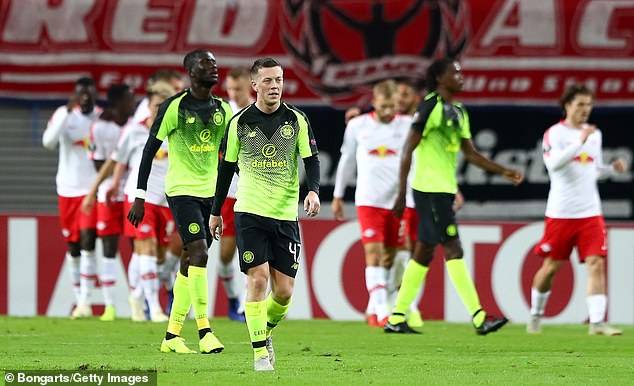 Rodgers can rightly point to the fact that taking his hugely under strength side to face the fifth best outfit in Germany was always going to be the tallest of orders. That may be true. As is the fact that they deserve some credit for sticking with it in the second half when he score could have got silly.

But with the head-to-head against Leipzig possibly being decisive in Group B, what’s beyond all dispute is that his side are now hugely up against it as they seek to extend their interest in the competition beyond Christmas.

Leipzig were not so good here that you could dismiss the possibility of a stronger Celtic side causing them problems in Glasgow in a fortnight. If the moments if inexplicable madness at this level continue, however, their chances of progressing will be somewhere between slim and zero.

There was a threadbare, almost experimental, look to Rodgers’ side. Already shorn of James Forrest through suspension, the manager was also without Tom Rogic, Leigh Griffiths, Filip Benkovic and Scott Brown through illness and injury.

Mikael Lustig had been declared fit so curiously started on the bench – perhaps with one eye on Sunday’s Betfred Cup semi-final with Hearts.

The door therefore opened for Cristian Gamboa, Eboue Kouassi, Ryan Christie and Lewis Morgan. The question was whether they would walk through it and take their chance. The blunt answer by time up was that too few reputations had been enhanced.

It’s not hard to deduce why Leipzig proudly wear the tag of the side others in Germany love to hate. Only formed in 2009 after buying out lowly Markranstädt, they have scattered money around like confetti hoping to one day win the Bundesliga. 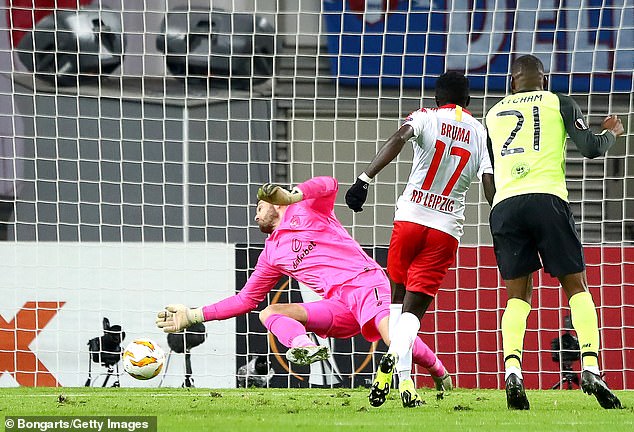 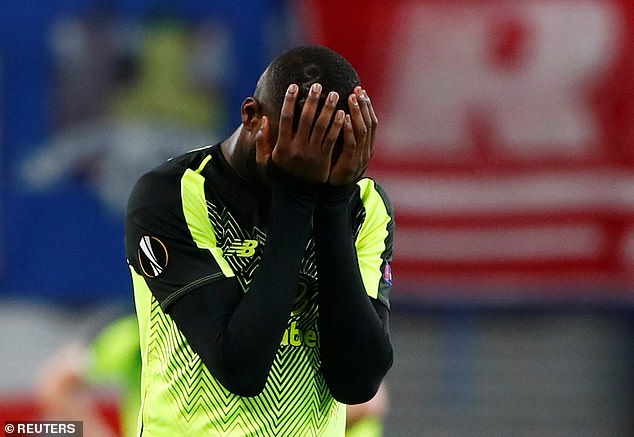 Some £225m has ben shelled out in four seasons, predominantly in up and coming talents. The extent of their largesse was illustrated by Timo Werner, Germany’s main striker at the World Cup, taking a seat on the bench beside Denmark’s Yussuf Poulsen.

Ominously for the Parkhead side, Ralph Rangnick, the Leipzig manager, was still able to field the likes of Kevin Kampl and Bruma, both class acts, as Scotland found to their cost against Slovenia and Portugal respectively in recent times.

However reviled the Leipzig project may be, this city has certainly bought into it in a big way. Playing in front of a few thousand in the lower divisions, their average attendance is now just 3,000 short of a 43,000 capacity.

The Red Bull Arena, or the RB Arena as it is pedantically known on European nights, had plenty plastic seats visible, though, making for an atmosphere that was hot rather than hostile.

Housed in the lower tier on one side of the pitch, Celtic’s 3,000 travelling fans made their presence felt before a ball had been kicked with pyrotechnics being thrown onto the trackside. Another rap on the knuckles from UEFA will assuredly follow. 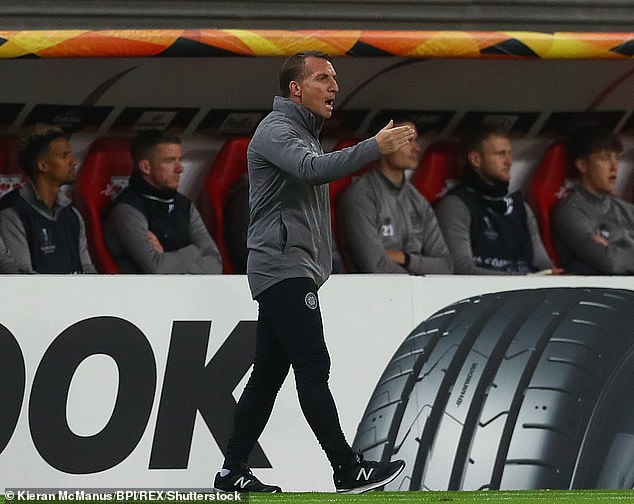 As in Salzburg, it started so promisingly for the Scots. A sweeping passing move involving Callum McGregor, Gamboa and Morgan gave Odsonne Edouard an early sight of goal. This time the scorer of that strike in Austria pulled his effort beyond the far post.

Olivier Ntcham did no better than his compatriot soon after, firing high and wide after a break-out of pinball had followed a free-kick.

Edouard passed up another opportunity after being picked out by stand-in skipper Kieran Tierney but the initial signs were promising.

Cunha served notice of what was to come by finding space between Celtic’s centre halves and redirecting Marcelo Saracchi’s centre just over.

Cunha then threw himself the turf as Gamboa slid in but Czech referee Pavel Kralovec correctly deduced that no contact had been made. 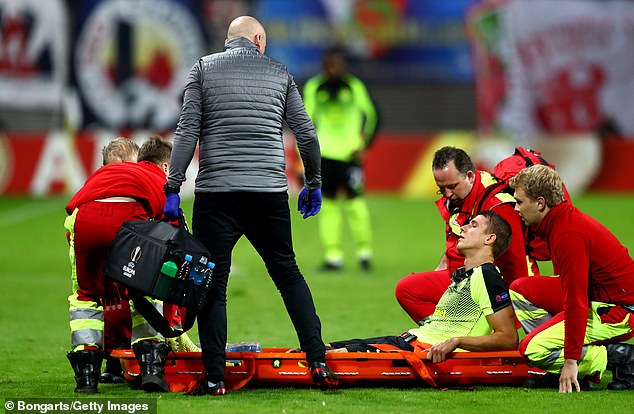 At the midway pint of the first half, Kampl was handed a piece of paper from his bench indicating a change of shape. Having relayed the instructions, the difference was immediately obvious.

Jean-Kevin Augustin’s cushioned lay-off fell perfectly for Cunha only for him to fire over. Celtic’s goal was starting to live a charmed life.

Having acquitted themselves reasonable well for 32 minutes, Rodgers’ side then endured a desperate period in which the game was effectively lost.

The first goal was completely avoidable. Marcel Sabitzer’s speculative cross from the right posed no obvious danger. Kouassi failed to deal with it though with Dedryck Boyata faring no better behind him. Cunha could hardly believe his luck. He took one touch to steady himself and thumped the ball past Craig Gordon from six yards.

Cunha almost doubled his and his side’s tally in the next wave of play.Thankfully for Celtic, he was a yard shy of meeting Kampl’s delicious reverse pass.

Celtic were suddenly shapeless and error strewn. The concession of the second goal was a formality. Gamboa needlessly committed himself when trying to block the bounding Saracchi. Holding his hamstring, the Costa Rican could only watch further calamity unfold. 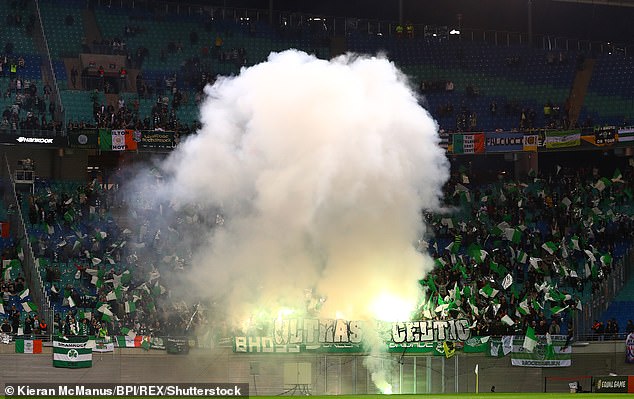 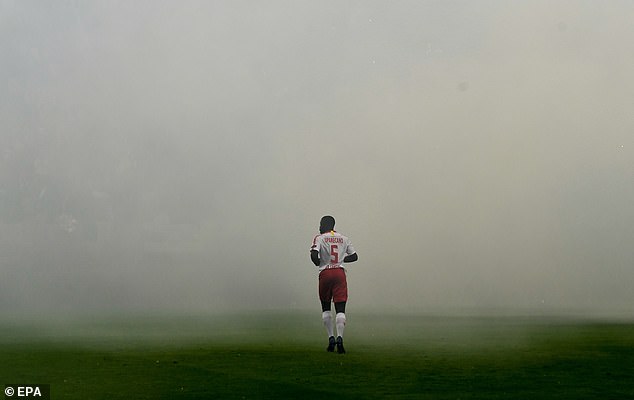 Kouassi again failed to deal with the danger with his sliding block ricocheting off Ntcham. Bruma punished the catalogue of errors with an assured finish.

Suddenly Celtic were clinging on for dear life. Gordon kept the half-time score semi respectable, though, with a fine body block to deny Kampl.

Lustig replaced Gamboa at the break but the traffic continued to flow towards the keeper’s goal. Konrad Laimer brushed off several poor challenges as he surged from midfield to fire inches wide of the far post.

The display of Gordon was the main positive from the night. Boyata’s error gifted Augustin an unwarranted look at goal and the Celtic keeper’s fingertip save onto the post was simply outstanding.

McGregor would have given us a grandstand finish had his strike from the edge of the box gone the right side of the post while Ntcham ought to have done better than his the keeper’s frame soon after. But it was not to be. Again. 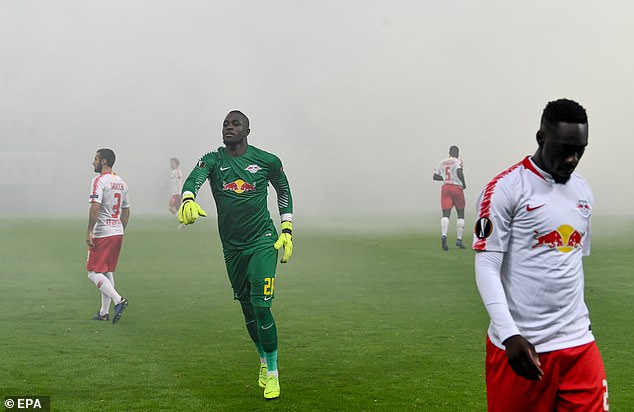