Ianis Hagis has praised the atmosphere inside the Ibrox after leading Rangers to a stunning first-leg comeback against Braga on Thursday night. Rangers looked down and out after finding themselves 2-0 down with just 30 minutes remaining.

Goals from Fransergio and Abel Ruiz had given the Portuguese side the ascendency despite Rangers showing promise in the first hour.

The two away goals also gave Braga some strong optimism looking ahead to the second leg in Portugal.

But Rangers turned the game on its head with January signing Hagi leading the comeback.

The 21-year-old, who is currently on loan from Genk, had threatened Braga’s defence all night but he finally found a breakthrough to halve the deficit after cutting inside from the right before lashing an effort past the post. 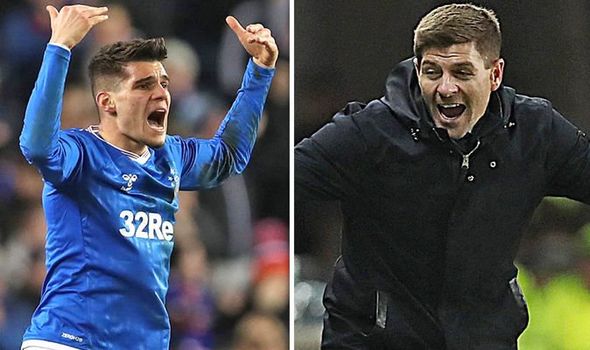 Just minutes later and the game was tied when Joe Aribo went on a darting run through a fragile Braga defence, skipping over multiple challenges before placing a calm finish past Matheus Lima Magalhaes.

Ibrox was bouncing with energy, urging Rangers to find a third and it soon came from Hagi once again.

The Romania international stepped up for a free-kick 30 yards out and his effort ricocheted off the top of the wall, wrong-footing Braga’s goalkeeper before squeezing in at the post.

Pandemonium followed as Steven Gerrard could be seen sprinting, arms open wide, down the touchline.

And Hagi was still clearly riding high after the final whistle as Rangers held on for a famous European win.

When asked whether his two-goal salvo ranks as the best moment of his career, Hagis added: “I guess.

“I had really good moments before, but scoring a brace in a European competition is amazing, it’s just a dream come true.” 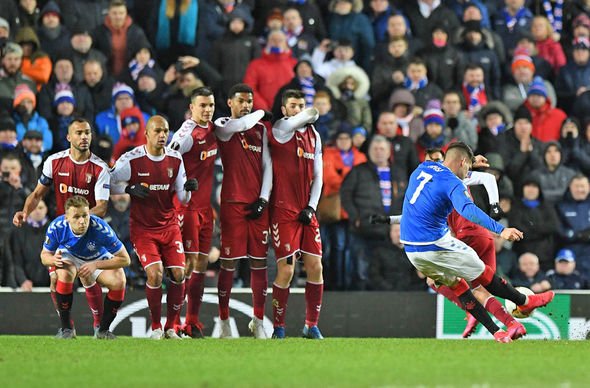 The win was even more impressive given Braga’s recent form in the Primeira Liga where they have recently beaten Sporting Lisbon, Benfica and Porto.

Rangers will be aiming to reach the round of 16 in the Europa League for the first time since 2011.

They faced Portuguese opposition in the round of 32 that time as well, beating Sporting Lisbon on away goals.