In a remarkable afternoon at the Khalifa International Stadium, a courageous Japan side fought back to pull off a memorable 2-1 win over Germany.

Germany led for much of the game thanks to an Ilkay Gundogan first half penalty, but Hajime Moriyasu’s team refused to be beaten and two late goals from substitutes Ritsu Dona and Takuma Asano, in the 75th and 83rd minutes, wrote their name in the developing storybook of Qatar 2022.

Following the enthralling clash, Sportsmail has rated both teams’ players. 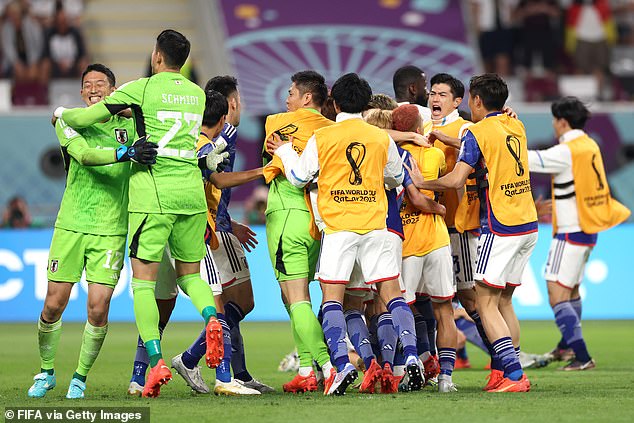 Manuel Neuer – The German keeper can’t really be faulted for this defeat as he pulled off two fine saves, one from Asano and another form Minamino – although the latter fell to Doan who slammed home the equaliser. 7

Niklas Sule –  The defender played on the right, but tended to tuck in as a third centre-back for most of the game. But he was heavily at fault for Asano’s winner, after he dropped deeper than his fellow defenders, playing the match-winner onside. 6

Antonio Rudiger – He was generally composed and wasn’t at fault for either goal, although he did miss a clear header from a corner that he should’ve done better with. 6.5

Nico Schlotterbeck – The centre-back was held off for Asano’s winner, while he was ball-watching for Dona’s equaliser and struggled throughout the clash. 5.5 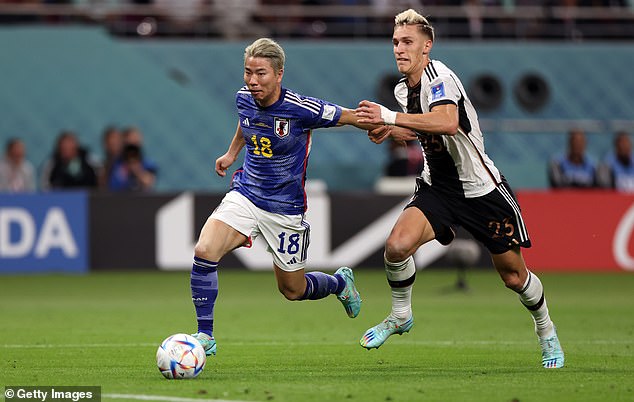 David Raum – The left-back was the more attacking of the German full-backs and was a threat down the left-hand-side, winning Germany’s penalty – but he was beaten to the ball by Dona for Japan’s first. 6.5

Joshua Kimmich – Tidy in possession and kept Germany ticking throughout the clash – skied a couple of efforts over the bar that he could’ve done better with. 7

Ilkay Gundogan – Germany’s biggest threat in the first half, forced Japanese keeper Gonda into two comfortable saves, before slotting home his penalty – also hit the post in the second half. 7.5 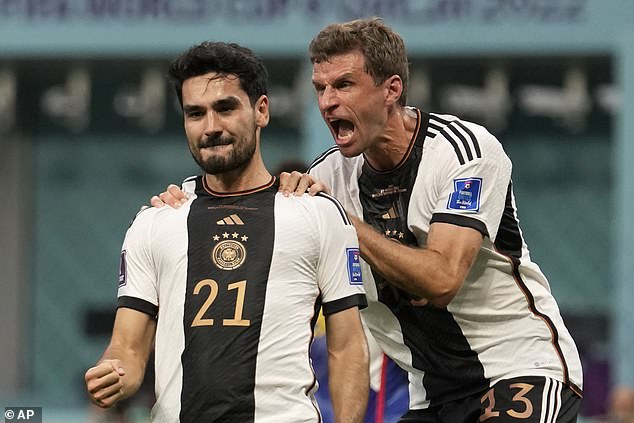 Serge Gnabry – Hit the bar early on in the second half and should’ve done better with three chances he had in a minute against Gonda. 6.5

Thomas Muller – Largely anonymous in the clash bar one driving run early on in the second half. 6

Jamal Musiala – Grew into the game and looked the part at points, particularly shining at the start of the second half when he almost scored the goal of the tournament after jinking past five defenders before blazing over – faded though. 7

Kai Havertz – Ploughed a lone furrow up-front and shouldn’t have been offside for his disallowed goal in the first half. 6 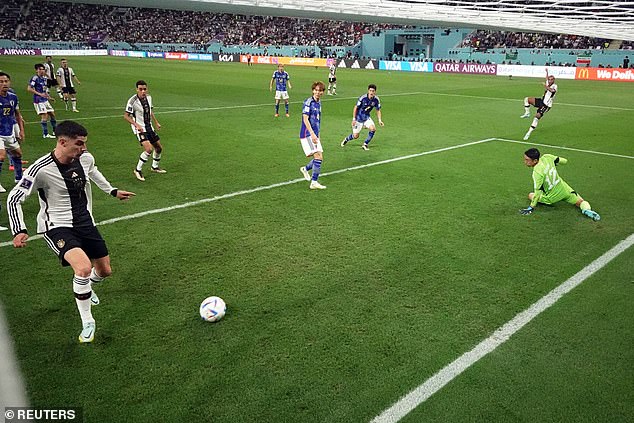 Leon Goretzka (on for Gundogan 67mins) – Struggled to impact the game much, although he did have a late effort that flew just wide. 6

Jonas Hofmann (on for Muller 67mins) – Didn’t really make his mark after coming on and missed a one-on-one with Gonda with the score at 1-0 Germany. 6

Mario Gotze (on for Musiala 78mins) – Returning to the international fold after five years away, a largely forgettable encounter for the 2014 World Cup match-winner. 6

Niclas Fullkrug (on for Havertz 78 mins) – Winning just his second Germany cap, tried to win a late penalty but to no avail. 6

Shuichi Gonda – Villain to hero. After a moment of madness in fouling Raum to give away a first half penalty, Gonda made four match-winning saves in quick succssion when his side were still 1-0 down. 8 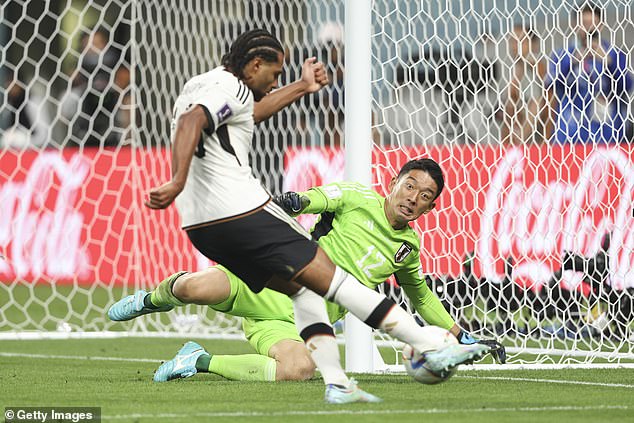 Hiroki Sakai – Also at fault for the penalty when he was dragged out of position, Sakai missed a sitter in the second half when he blazed over from six yards out. 6

Ko Itakura – Despite Germany dominating much of the game possession wise, Japan generally kept them at bay for most of it and Itakura was key to this. 7

Maya Yoshida – The former Southampton defender, like Itakura, was brave, putting in some last-ditch blocks and helped to shackle Havertz. 7

Yuto Nagatomo – The veteran full-back did what he needed to do and put in a beautiful cross that Maeda headed wide in the first half. 6.5

Ao Tanaka – Worked hard in midfield to deal with the experienced and talented German playmakers. 6.5

Wataru Endo – Workman-like along with Tanaka and put in one fabulous block at the death. 7

Junya Ito – The Japan winger showed his searing pace on occasions as he got in down the wing, putting in a delightful ball for Maeda’s early disallowed goal. 6.5

Daichi Kamada – Japan’s dangerman showed in spurts why he has been enjoying such an impressive start to the season with Eintracht Frankfurt. 7 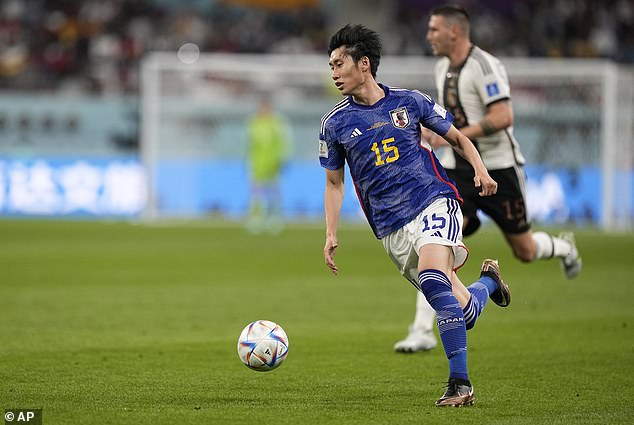 Takefusa Kubo – Taken off at half-time for Takehiro Tomiyasu. 6

Daizen Maeda – Worked hard up-front and finished his disallowed goal well – but he didn’t need to be offside in the first place. 6.5

Takehiro Tomiyasu (on for Kubo 45mins) – Seemed to be following Gnabry and Muller when he slotted in as left centre-back – showed his defensive acumen. 7

Takuma Asano (on for Maeda 57mins) – Changed the game when he came on, proving to be a thorn in the side for Germany’s defenders before his finely-taken winner. 8.5 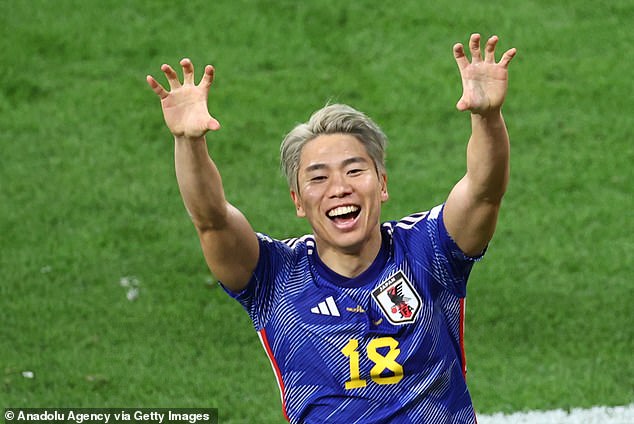 Takuma Asano came off the bench and changed the game, before netting the winning goal

Kaoru Mitoma (on for Nagatomo 57mins) – Continued his impressive Brighton form as he had a role in the equaliser. 6.5

Ritsu Doan (on for Tanaka 71 mins) – Scored four minutes after coming on to lay the platform for Japan’s memorable win. 7

Minamino (on for Sakai 74 mins) – Had a role in the equaliser, by having his fierce effort saved into the path of Doan in what was an instant impact from the former Liverpool man. 6.5