Pep Guardiola says it is likely Manchester City will not sign a striker to replace Sergio Aguero this summer, with the prices being quoted for top talent making it “impossible”.

City announced on Monday that Aguero, their all-time leading scorer, would be leaving the club at the end of the season when his contract expires and, although they have been searching, Guardiola says the Argentine will be “irreplaceable”.

Sky Sports News has reported that, although they have been following Borussia Dortmund’s Erling Haaland – the most coveted striker in Europe – his valuation of more than £100m may price City out of a deal, leading them to consider Danny Ings as a more attainable option.

And, ahead of Saturday’s trip to Leicester live on Sky Sports Premier League, Guardiola told a news conference: “There is a big chance we are not going to sign a striker this summer.

“We have enough players in the first-team right now and we have interesting players in the academy, so there is a big chance that, because of the economic situation in the world right now, we are not going to sign a striker next season. 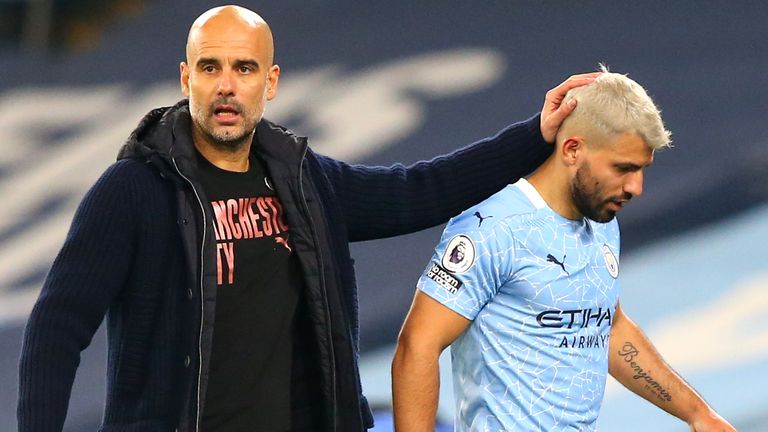 “With these prices, we are not going to buy any striker. It’s impossible, we can’t afford it. That is not going to happen. All the clubs struggle financially, and we are not an exception.

“We have Gabriel Jesus, we have Ferran Torres, who played incredibly this season in that position, we have young players in the academy, and we play many times with a false nine.

Guardiola was speaking just 24 hours after Haaland’s agent Mino Raiola and father Alfe Inge met with representatives of Barcelona and Real Madrid in Spain, with Borussia Dortmund ready to battle to keep him also from the likes of Chelsea and Manchester United.

Ings’ contract situation at St Mary’s puts City in a stronger position for a more realistic fee; he is about to enter the final year of his deal and has so far not agreed to sign new terms that have been on offer for some time – but his injury problems this season are a concern after they blighted his time at Liverpool.

Despite their considerable financial backing, City are wary of Financial Fair Play rules and their transfer record remains the £65m they paid to sign Riyad Mahez from Leicester. They have also shown they will not panic buy a replacement even for a top player, waiting a year to replace Vincent Kompany with Ruben Dias.