The first 100 days of a new administration are the most crucial.

Goodwill is strong, optimism soars, ideas are plentiful and motivation is high as the new leaders of a business seek to impose their stamp.

They are allowed to fly kites and throw out new plans and suggestions.

But they can't live in a conceptual ivory tower. They have to start, if not delivering, then putting in place the processes that will allow them to produce the outcomes they have promised. 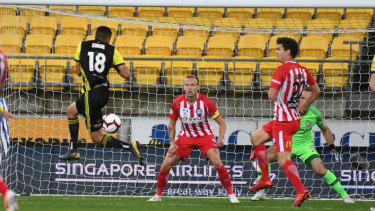 Stands have been emptying in recent years, and bringing back A-League fans is a huge test of the new regime.Credit:SNPA

For the Australian Professional Football Clubs Association (APFCA) – the umbrella body for the clubs that now control the A-League – those first hundred days represent a great opportunity to roll out a new vision and philosophy.

To their credit they are wasting little time since they took the reins, which is just as well given the state of the game at present, with stagnating crowds, television audiences falling (or migrating to streaming services) and a general sense of ennui having developed about the way the A-League is operating.

They have a mountain of work to do if they are to achieve their aim of rebuilding and rebranding the A-League so that the sport can generate the kind of revenues required to lift it to the level that it needs to be to compete in the marketplace.

The league should get an immediate interest boost this season with the inclusion of Western United, which is seeking to build its identity not just in Tarneit, Geelong and Werribee, but also in all suburbs and regions west of the Westgate Bridge.

Western has assembled what looks like a useful squad with some well-credentialled veterans and some promising youngsters, so they can be expected to be competitive from the outset.

But one new club won't solve all the problems – especially as no one knows just how many fans Western will attract and whether they will prove a drawcard on Fox's television broadcasts or on the streaming services that are now complementing (or replacing) viewers watching on traditional broadcast platforms.

Heavy investment in marketing has been promised by the new, yet-to-be-named entity that will control the league.

That's gratifying to hear, as it is not before time.

Club owners, who now call the shots, have been seething about the lack of promotion and sizzle in Football Federation Australia's sales pitch for the A-League in recent years.

There have been few memorable campaigns, and certainly nothing to match the groundbreaking and stylish "paint splatter" series of commercials that accompanied the inaugural season kick-off in 2004.

The club chiefs know, however, that a few splashy TV commercials will not be enough.

There has to be a sustained policy of engagement with existing supporters who have become jaded and a push towards re-engagement with those who have abandoned supporting their clubs in recent years.

How best to do that? Opinions vary.

Many people believe signing big names is the answer, and some club chiefs will undoubtedly try to line up a well-known face from Europe in the two months remaining before the season kicks off.

Such players undoubtedly provide a sugar hit and will lift audiences and ratings in the short term. But they will only continue to do so as long as they are performing on the pitch.

And that is not always the case, even though exceptions such as Dwight Yorke, Alessandro Del Piero and Shinji Ono do suggest that they can play a major role if they arrive in good shape and motivated to perform rather than just to pick up a healthy wage packet.

Others – and I tend to be in this group – believe signing talented players rather than big names can have more long-term value and make a telling contribution.

After all, who but serious soccer fans had heard of players such as Carlos Hernandez (Melbourne Victory), Marcos Flores (Adelaide), Thomas Broich (Brisbane), Diego Castro (Perth),  Milos Ninkovic and Adrian Mierzejewski (Sydney FC) and Roy Krishna (Wellington) before they came to the A-League?

Yet all of the above became Johnny Warren Medal winners and arguably contributed far more than several bigger names whose influence did not match the reputation that preceded them.

The clock is ticking. The 100 days will run out just after the season kicks off. Plenty needs to be done.