What about your eight titles, Gary? Neville believes current Manchester City side are the ‘greatest’ team ever in Premier League history after racking up 198 points in two seasons

Gary Neville, an eight-time title winner with Manchester United, has admitted Manchester City could be the greatest Premier League team ever.

Pep Guardiola’s men clinched back-to-back crowns on Sunday, edging out Liverpool by a single point after winning all of their final 14 games.

They have now won the league four times in eight years to establish themselves as the dominant force in English football, and could complete an unprecedented domestic treble in Saturday’s FA Cup final. 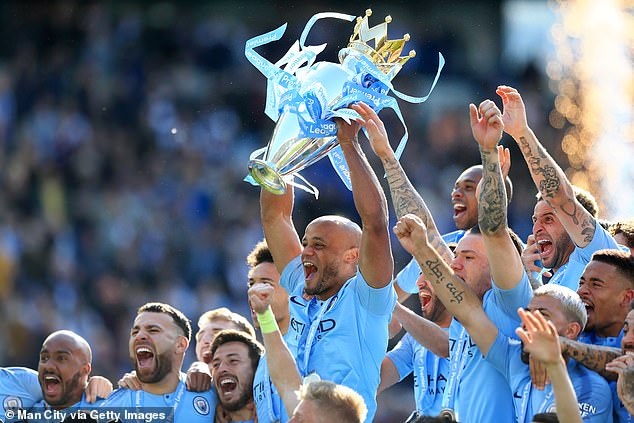 Manchester City are the ‘greatest’ team in Premier League history, according to Gary Neville

Asked if they could be considered the best team in the Premier League era, former United and England defender Neville told Sky Sports News: ‘I think so. There are people who’ll debate that, I would think, but what they have done in this last two years…

‘Last year was a great achievement, but when you win back-to-back titles amassing the points that they have, withstanding that challenge that they’ve had from Liverpool, which was relentless right the way to the very end, it makes them a great side.

‘Pep Guardiola has come to England and people will mention the Champions League, but I would dismiss that, really. 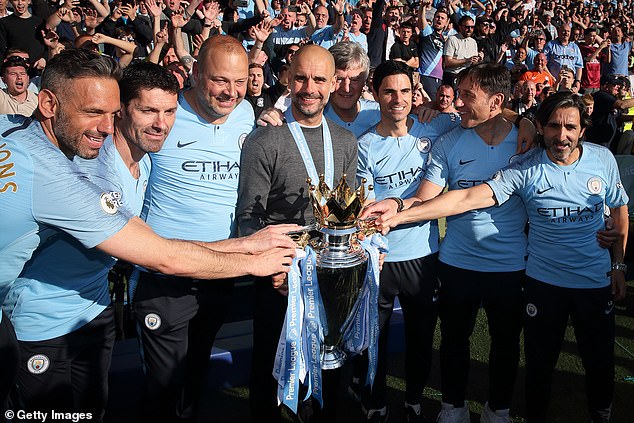 ‘To do what he’s done here now in this last two years is unprecedented, it’s incredible. The points tallies are just out of this world and the football he’s played as well, so I think you can say, yes, this is the greatest.

‘I like our teams, I like the Chelsea team – there will be people who’ll say, ‘Who is the greatest?’, but what they have done in terms of points, you can’t deny.’

In guiding City to their latest success, former Barcelona and Bayern Munich coach Guardiola simply enhanced his own reputation and in Neville’s opinion, should be regarded alongside the aristocrats of the English game.

Neville said: ‘Pep Guardiola, he’s come to England – like I say, there will be people who will question that Manchester City have fallen short in the Champions League, but what he achieved yesterday, and obviously he has a chance next week to win a domestic treble – puts him up there with the great managers.

If there were celebrations in the blue half of Manchester, there was disappointment on Merseyside as Liverpool came up agonisingly short despite losing just one league game all season. 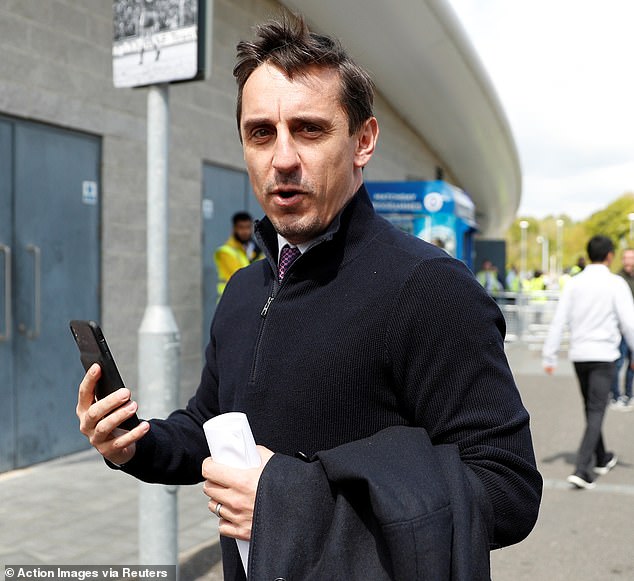 Champions League glory could yet soothe that pain, but Neville insists Liverpool deserve huge credit too after a thrilling campaign.

He said: ‘When I think of the Barcelona team that Pep Guardiola had eight, nine years ago, it stopped Manchester United winning three Champions League titles just because they were so good, and Liverpool can just look at it pragmatically with a philosophical view that they came up against a great side.

‘I never thought that that squad was capable of mounting a challenge for the title like they have and the Champions League.’