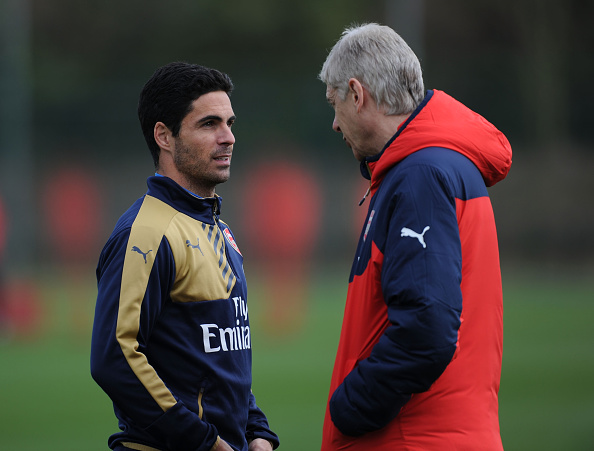 Mikel Arteta says he would be ‘delighted’ to have Arsene Wenger back on board at Arsenal in some capacity and feels the Frenchman’s knowledge and experience would be a ‘great help’ for him and his team.

Wenger ended his 22-year spell in charge of the Gunners back in 2018, departing as the most successful and longest-serving manager in the club’s history.

The 72-year-old is currently working as FIFA’s Chief of Global Football Development, a position he took on two years ago, but there has been mounting speculation he could be set for a role back at the Emirates.

Wenger has been receptive to the idea and Arteta believes his former boss’ presence would only be beneficial for him and his squad due to the ‘respect, admiration and love’ that exists as a result of what he achieved across his tenure.

‘He’s been in communication. I saw him and I talked to him when we went to see the film (‘Invincible’),’ Arteta told reporters at his press conference on Thursday.

‘It was incredibly pleasant to see him and chat to him.

‘Hopefully we can bring him close because I think he would have a great time just seeing the environment he can create around him when he’s around this place because of the respect, admiration and love that everybody at the club has for what he’s done and as well what he represents as a person in this club.’

Asked what role Wenger could potentially take up, the Spaniard replied: ‘I cannot tell you now.

‘But what I can say is I would like him to be much closer to me personally because I think it would be a great help, a great help for the club.

‘Things take time and he has to dictate those timings and what I can say from my side on my behalf of everybody that we would be delighted to have him much closer.’