Mr Motivator: The principles that worked so well with Northern Ireland were bearing fruit at Stoke for Michael O’Neill… until coronavirus hit

Edinburgh in the spring is a nice place to be, it’s just not where Michael O’Neill really wishes to be.

With the football season suspended, the manager of Stoke City and Northern Ireland has retreated ‘back up the road’ to the family home in Scotland.

Instead of the pressures and intensity of a Championship survival fight and the anticipation of a Euro 2020 play-off game with his country, O’Neill is living his life in suspended animation, just like everybody else. Michael O’Neill is living his life in suspended animation, just like the rest of the country

‘Yeah, I am the same as everyone,’ O’Neill tells Sportsmail. ‘I read all the news about what’s happening.

‘Then sometimes I will go out on my bike or out for a run. Then my staff and I are watching old games, looking at players for next season, and keeping in touch with our squad.

‘But it’s difficult, there’s no real purpose. ‘The most important thing is to make sure our players at Stoke are ready if and when we are called upon to restart the season. It’s like remote teaching in a way.’

Hired by Stoke last November, O’Neill has the club on a gentle upward trajectory. Six wins and three draws from 12 league games this calendar year have taken Stoke from the relegation zone to 17th.

Last time out they beat Hull 5-1 at home. And then everything changed. ‘Initially, we just gave the players three days off and then we thought we may be able to get them in to train in small groups,’ he says.

‘But now we are isolated from each other. I have no idea when we will play again. Personally, I think many of the deadlines are ambitious.’ Technology is a coach’s friend in these unprecedented times. 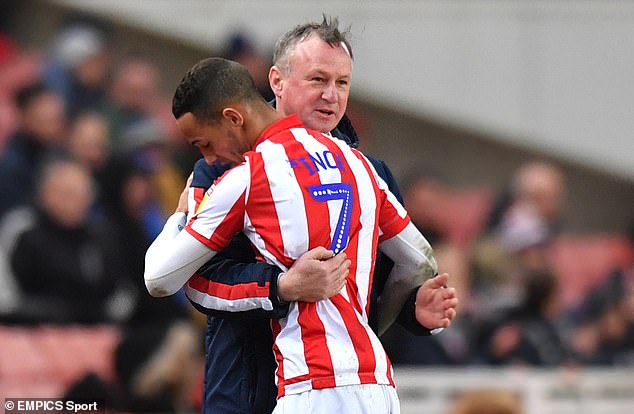 Hired by Stoke last November, O’Neill has the Championship club on an upward trajectory

So too is the modern footballer’s mentality. ‘We have a GPS system which tracks what players are doing and players of today are different anyway,’ O’Neill reasons.

‘They are more health and fitness conscious than players in the past. They know they are not on holiday and their exercise is probably the one thing they are looking forward to right now. But obviously there is no ball work and no match day. That’s the problem I guess. We may be told that when football resumes we just have to go and play. We would be undercooked but then everybody else would be the same. It would just be a blessing to be back playing.’

O’Neill is the man who dreamed of a sporting miracle with his country and made it real.

He is 50, and his managerial experience prior to taking the job with Northern Ireland was limited to spells with Shamrock Rovers and Brechin City. In Northern Ireland’s first three friendlies under him in 2012, they conceded 12 goals. Four years later they were playing in the finals of the 2016 European Championship, the country’s first tournament for three decades. His task at Stoke is not as big but it’s big enough.

The Potteries club fell out of the Premier League after a 10-year residency in 2018 and spent heavily to try to return. They failed and O’Neill has now become the third manager in that time to try to reverse the momentum.

‘We have a lot of people at the club who have spent a long time in the Premier League but the priority now is to make sure we don’t end up in League One,’ he says. ‘When clubs have four managers in two years you get a fractured squad. There was a lack of balance here.

‘There were a lot of disillusioned players too and we simply had too many bodies. And when we got to games, a lot were left out of the squad and that leads to disharmony. We streamlined that in January. A lot went out and a different type of player came in. Now we have some harmony.’

O’Neill’s time with Northern Ireland has been characterised by an ability to get the most — and then some more — from a group limited by numbers and ability. At Stoke, it’s a little different in that he will eventually have a transfer market to look at. Core principles remain, though. O’Neill is probably one of the most approachable men in football, but a calculated streak also underpins his work. After winning the League of Ireland with Shamrock in 2010, he released eight players. ‘I just thought we needed better ones,’ he says.

Then, after his Ireland side lost their opening game of the Euro 2016 finals to Poland, he made five changes in order to beat Ukraine. Similarly, when he arrived at Stoke, there was no attempt to dress up his key message.

‘We sat the players down and told them the club was in that position because of results and they have an accountability for that,’ he explains.

‘We didn’t hide behind that. Regardless of who the manager had been, the mentality to win games had not been strong enough in the dressing room for a long time. Northern Ireland was a hopeless case when I went in. It was hard to change mindsets and create some expectation. I managed that and we had some great times.’

O’Neill was a talented midfield player. Unfortunate to play as a teenager in a poor Newcastle team towards the end of the 1980s, he eventually flourished in Scotland. At Stoke, he will seek players keen to mirror a little of what his own career has always entailed.

Self-improvement, hard work and the right motivation. ‘I was a little surprised at the levels of salary in the Championship when I took over,’ he says. ‘This club has looked after players very well — both in the Championship and the Premier League — and from that point of view the right players at Stoke will do well.

It seems the coronavirus epidemic has robbed O’Neill of another chance to manage at a major tournament.

Even if Northern Ireland do come through two play-off games against Bosnia and then the winners of Slovakia and the Republic of Ireland — whenever they are played — it seems unfeasible that he can still be in charge when the finals are eventually played in the summer of 2021. 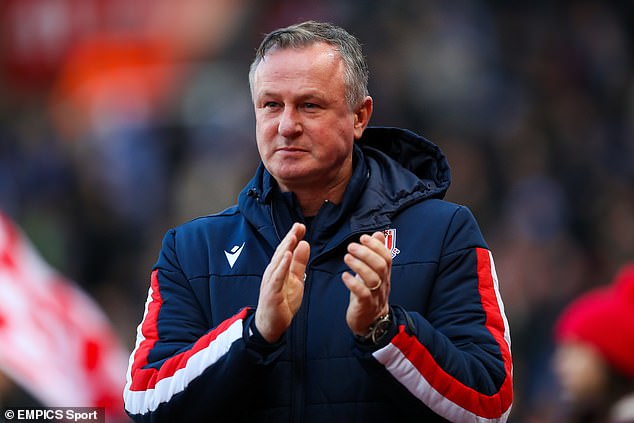 His legacy is secure, though. ‘The Euros in 2016 was amazing but the bigger thing I took was a change in belief,’ he says. ‘Players and supporters started to think we could qualify for tournaments. In the past, players wouldn’t have regarded their international career as significant. Now they possibly look at it as the most important part and that’s very nice to know. But what comes next for me? I had to look forward.

‘You can become too attached to memories. My biggest fear with (Northern) Ireland was that I always felt it could go back to what it was when I picked it up. That’s why I never salivated over the success we had.’

O’Neill’s has been a romantic journey in many ways but now pragmatism rules. Clubs across the country are staring at increasing financial problems as the season hangs in suspension.

‘Normally when a club hits money troubles, the players can look at other options,’ he says. ‘Now it will be broader. There is nowhere else to go. It will be interesting and challenging for all clubs as the landscape will be different financially when we come out of this. So it’s hard. It’s uncertain for players out of contract, for example. They don’t know what the market will look like after this. Nobody does.’