Micah Richards is the latest guest on the Super 6 Podcast, joining Laura Woods to discuss all things Sergio Aguero, Aston Villa and his England call-up.

Sergio Aguero has scored 181 Premier League goals in his Manchester City career, but Richards assisted his first. What does he remember about the moment?

Woods: “Aguero’s statue should be of that first goal he scored, with a statue of Micah assisting in the background!”

Richards: “It comes as a pair, like Batman and Robin!”

On Aguero’s departure: ‘I was devastated’

Aguero is leaving Manchester City at the end of this season – and Richards admitted he was gutted at hearing the news.

“I was on the radio when the news broke. Sergio has been texting me, I have been asking if he is alright and we are going to go for some dinner after lockdown and what not. I am always laughing and bubbly but when [the news] came, I was devastated. 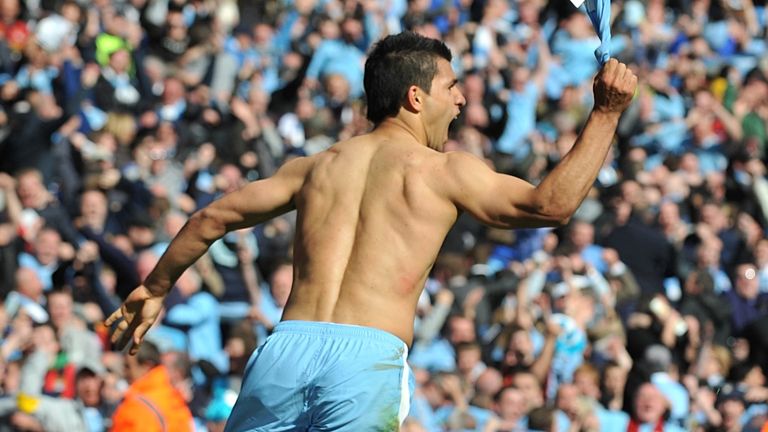 “There was no point in me doing the last hour of the show because I couldn’t process it. It sounds stupid, but there are people who make their mark on clubs, and he was a real genuine world-class, superstar, legend of the game, and not just for Manchester City, but of the Premier League.

“To see that end of an era after everything he has done and given for the club. The timing of it was harder for me to accept, as we are still in four competitions. To announce that now, will it cause some unrest in the camp?”

Richards was the youngest ever defender to win an England cap but when the call came from Steve McClaren, Richards admitted he thought it was a joke!

“I was in Moss Side in Manchester at the barber’s. The phone rang – ‘Hi Micah, it’s Steve, you have been called up for the national team’ – and I put the phone down. That is a genuinely true story, not even banter.

“I put it down because there had been no talk of it at all. Normally when a player is getting in, the club might tell you or the journalist but it came out of nowhere! I am always laughing and joking so the people who I used to hang around with were always messing around, so I thought it was just one of the lads.

“It rang back again and with a withheld number so that’s why I thought it was a prank! They said it was serious. I was in the barbers and I couldn’t believe it; 18 you know! A year before I had made my debut and now I am in the England squad. It was weird because I put the phone down but it was one of the best feelings ever!”

Aston Villa were relegated from the Premier League in the 2015/16 campaign with Richards the club captain. He speaks candidly on the podcast about what he saw as the reasons for the club’s demise.

“When Tim Sherwood was there, I didn’t miss a game. I kept my number, so I thought this was a match made in heaven. He wanted to play, I was playing some great football and we signed some good players, but Fabian Delph goes, Christian Benteke leaves, Ron Vlaar leaves and Brad Friedel too, so the spine of the team basically.

“I feel in good shape, and then they change the manager. Remi Garde came in and he was awful. Not only was he awful, but my form was also awful too. Everyone else in the team was awful as well, so it was collectively shambolic.

“The fans booed us, confidence was drained even more, so it was a recipe for disaster. From being a Premier League winner to being relegated – I am glad it happened though, because it made me see it from both sides and it shaped me as a person.”

Sympathy with Gerrard over slip

Steven Gerrard’s slip, which allowed Demba Ba to sink Liverpool at Anfield, was deemed as a turning point in the 2014 title race, shifting the pendulum in the way of Manchester City. Richards recalls the incident…

“If there was one person who deserved the Premier League, it was Steven Gerrard. When he slipped I was like, ‘Wow’, as he had them in the huddle – ‘We do not let this slip’. I could not have wished that on anyone as he fully deserved it.

“What he did with Liverpool, and of course everyone talks about what you win, but how he galvanised his teams, bringing them back when they were down, look at the Champions League!

“He is a proper character, but when that happened we just knew it was our time. I have got the medal here actually!”

“I think Ruben Dias has been brilliant, but what Virgil van Dijk has done over the last couple of seasons has been incredible, so I would have to say van Dijk.”

“This season Ilkay Gundogan has been different level. If you were asking who I would want in my team, I would say Bruno Fernandes. This season Gundogan has come from nowhere. he has always been a good player, but this is his best goalscoring season. I would have to say Fernandes.”

Listen to the full episode with Laura and Micah on Spotify or on Apple Podcasts now!

If you missed earlier episodes, don’t worry. You can listen back to interviews with Jamie Carragher, Dominic Calvert-Lewin, Conor Coady, Michail Antonio and Declan Rice on YouTube or on Apple Podcasts

Another £250,000 is up for grabs on Saturday. Simply predict six correct scorelines to scoop the quarter of a million. Play for free, entries by 3pm Saturday.