A backheel, body feint and a flicked, outside-of-the-boot assist so outrageously filthy its parents told it to stay outside so they could attack it with a hosepipe. Most players would be happy if they achieved each of those mesmeric touches over the course of a season. Last night, Mesut Ozil managed it in the space of 20 seconds.

But let’s rewind. Arsenal are leading Leicester 2-1: Ozil has already scored one sublime goal and helped to set up another. The game is becoming increasingly stretched, when Bernd Leno plays a simple sideways pass to Rob Holding, under pressure from Jamie Vardy. Holding gives it to Granit Xhaka who lays off Lucas Torreira — which is where Ozil comes in.

So far, so conventional. And there is precious little out of the ordinary about Torreira’s driven pass, with Ozil flanked in the centre of the pitch by Alex Iwobi and Alexandre Lacazette like sentries. And so the simple course of action for Ozil is to play a square pass, or to allow the ball to run onto Hector Bellerin beyond him.

But when has there been a player as singularly disinterested in the simple course of action as Mesut Ozil?

Only it takes a few more precious nanoseconds for the true brilliance of Ozil’s touch to become clear. Us mere mortals need time to catch-up and compute the brilliance of the position Ozil has choreographed. Because, in ignoring Iwobi and Lacazette, he has ensured Leicester’s centre-backs are unable to attack the ball. And in flicking it onto Guendouzi, he has ensured Bellerin is free to run into space down the right wing.

Bellerin duly receives the ball. Naturally, he instinctively looks to return it to Ozil. But Ozil is now encircled by five blue shirts having hared powerfully downfield. He knows he is not in a position to help, but hinder. And so he allows it to run between his legs knowing that sometimes, inaction is the greatest action of all. Lacazette collects the ball and quickly prods it forward. By this point, Ozil is ready for his second touch.

It is here, having orchestrated this entire attack and with Kasper Schmeichel at his mercy, that just about any other player would have looked to squeeze their shot in at the near post. Of course then, Ozil insouciantly wafts it back across the face of goal with an artful swish of his left boot, for Pierre-Emerick Aubameyang to gratefully stab home.

“I think we played some sexy football tonight,” Ozil tweeted almost immediately after stepping off the pitch. 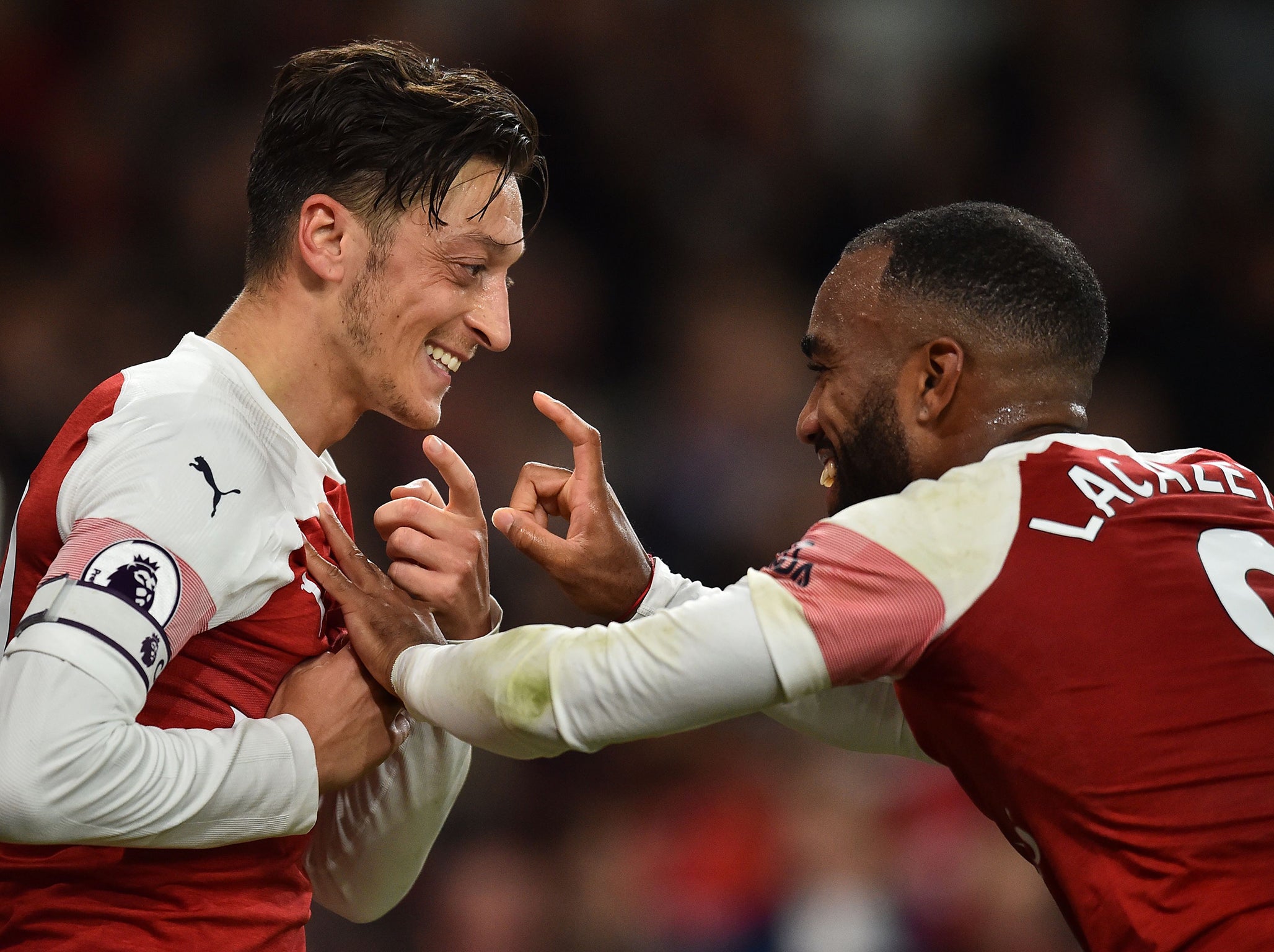 Sexy football. That’s what Ozil should be doing. Forget cramming him onto the right side of a three-man midfield and asking him to focus on pressing first and passing second. Or pouring over his sprint speed statistics and KM-run record. Judging Ozil on that sort of stuff is like Jackson Pollock on his ability to colour in between the lines. Ozil is an artist — not a tradesman.

And so perhaps the most encouraging thing about Arsenal’s performance was the very fact that Emery saw fit to move Ozil back into the middle, back into his favoured position, where he can be accommodated by his team-mates and in turn help raise their game to new heights.

Emery has been honest about wanting more from Ozil this season, but it is only reasonable to expect a career-best performance from the playmaker if he is being regularly deployed in his best position. Ozil does not need to be a conundrum. Reinstated into the heart of Arsenal’s starting XI with the captain’s armband strapped to his arm, he delivered.