Barcelona fans will be celebrating the fact they will get to watch their beloved Lionel Messi for another season after he announced he would be staying at the Nou Camp on Friday.

But the result of the high-profile arm wrestle between the world's most iconic soccer player and one of its biggest clubs appears to have ended with neither camp able to claim victory.

On the face of it, the 33-year-old six-time world player of the year appears to have backed down in the raging contract row ignited last week when he stated he wanted to leave for free. 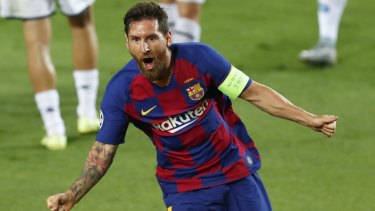 Lionel Messi is staying at Barcelona but there may be more tears to come. Credit:AP

Barcelona president Josep Maria Bartomeu, backed by La Liga, insisted Messi's contract, due to expire next summer, contained a release clause, meaning that for him to move to a new club a 700 million euros fee would need to be paid.

In a statement on Friday, Messi said he was staying on reluctantly, rather than face a bitter court battle with the club he joined as a teenager and with whom he has amassed more than 30 major trophies and netted over 600 goals.

This was no ringing endorsement, though.

"I wanted to go and it was entirely my right, because the contract said that I could be released," Messi said in an interview with Goal.com.

"I wanted to go because I thought about living my last years of football happily. Lately I have not found happiness within the club."

Messi is rich beyond imagination; the fact that he will pocket a 70 million euros loyalty bonus, and get to leave on a free transfer next summer, would not have been a factor in his decision.

The Argentine has clearly become disenchanted with life at Barcelona. On the pitch Barcelona's 8-2 defeat by Bayern Munich in the Champions League was a humiliation; off it, his relationship with Bartomeu has hit the rocks.

"I want to compete at the highest level, win titles, compete in the Champions League. You can win or lose in it, because it is very difficult, but you have to compete."

Messi's love for Barca, and his adoring fans, means he is unlikely to go through the motions next season but new manager Ronald Koeman, a Bartomeu pick, now has an unhappy player on his hands as he tries to rebuild a squad that has gone stale.

Bartomeu may claim victory over Messi's U-turn but the club could now see its greatest asset leave for nothing next summer instead of the mind-boggling sum that would have come after an unprecedented bidding war for his signature.

Manchester City, the club in pole position to sign Messi until Friday's development, will be disappointed.

Still, it is not beyond the realms of possibility that they could still look to strike a deal in the current transfer window, or perhaps in the winter window when Barca may be more inclined to cash in while they can.

Ultimately, perhaps the most obvious beneficiaries of Messi's decision are his family.

"When I communicated my wish to leave to my wife and children, it was a brutal drama," Messi said. "The whole family began crying, my children did not want to leave Barcelona."

There may still be more tears to come though.